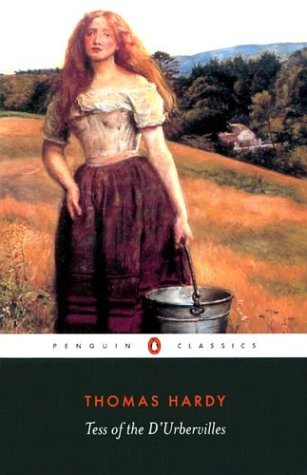 TESS OF THE D’URBERVILLES

The chance discovery by a young peasant woman that she is a descendant of the noble family of d’Urbervilles is to change the course of her life. Tess Durbeyfield leaves home on the first of her fateful journeys, and meets the ruthless Alec d’Urberville. Thomas Hardy’s impassioned story tells of hope and disappointment, rejection and enduring love.

The chance discovery by a young peasant woman that she is a descendant of the noble family of d’Urbervilles is to change the course of her life. Tess Durbeyfield leaves home on the first of her fateful journeys, and meets the ruthless Alec d’Urberville. Thomas Hardy’s impassioned story tells of hope and disappointment, rejection and enduring love.

Thomas Hardy was born on June 2, 1840. An extremely productive novelist, Hardy published an important book every year or two. In 1896, disturbed by the public outcry over the unconventional subjects of his two greatest novels—Tess of the D’Urbervilles and Jude the Obscure—he announced that he was giving up fiction and afterward produced only poetry. In later years, he received many honors. He died on January 11, 1928, and was buried in Poet’s Corner, in Westminster Abbey.

The title of Hardy’s novel describes Tess as “a pure woman.” Does Tess, in fact, remain pure? In what respects? Why does Hardy highlight this quality in his title?

In the “Explanatory Note” that precedes the novel, Hardy writes that Tess of the D’Urbervilles represents “on the whole a true sequence of things” and grew out of his wish “to have it said what everybody thinks and feels.” Can Tess of the D’Urbervilles fairly be called a “truthful” piece of fiction? Are its characters and situations believable? Do you find its underlying philosophy persuasive?

Some who read Tess of the D’Urbervilles when it was first published in 1891 argued that Tess was a “little harlot” who deserved her death by hanging. Modern readers are rather less likely to respond to Tess so harshly. How do you think the overall change in social mores between 1891 and today affect how you respond to Tess?

Why does Hardy divide his novel in “Phases”? What apparent transformations separate each phase from the last? How does this term encourage us to think about Tess, and what does it say about what Hardy meant to accomplish in his novel and about his view of human development?

In classical tragedy, the hero is destroyed from within by a tragic flaw in his or her character. Does Tess have a tragic flaw, or is she better understood as a victim of external circumstances?

Tess’s tragedy is set in motion by her father’s discovery of his noble ancestry. Although Tess herself possesses a kind of natural nobility in addition to her noble heritage, the men in her life continually see her as somehow inferior to them. What does Hardy suggest about the hierarchies that people observe among themselves, whether arising from ancestry, wealth, or gender? What hierarchies seem to exert the greatest influence, and why?

Today, in most communities, Tess mothering a child out of wedlock would probably be far less of a scandal than it was in Wessex in 1891. While this greater social acceptance would be good news for a modern Tess, it would considerably impact Hardy’s plot. What is the range of tragic art as its traditionally forbidden content becomes acceptable? Can tragedy as a genre exist in a tolerant, permissive culture?

Many of Hardy’s characters are defined either by their religious beliefs or lack of them. What forms of spirituality are represented in the novel? Which does Hardy appear to favor? Are there any belief systems in the novel that do not, at some point or another, cause harm to the believer or to others? Does Hardy give us any guidance in distinguishing beneficial beliefs from harmful ones?

Hardy never explains why Tess, after being drugged and raped by Alec, remains with him for several months. How might you account for her decision not to leave him at once?

When describing Tess’s “moral hobgoblins” in Chapter XIII, Hardy writes, “It was they that were out of harmony with the actual world, not she.” How do you respond to Hardy’s suggestion that civilized society is a moral failure because it is out of tune with the “actual,” or natural world? What, as Hardy sees it, is the essential conflict between society and nature? What would a “natural” morality look like, and would it be an improvement?

In Chapter XV, Hardy quotes a striking statement from Saint Augustine: that God has “counseled a better course than [He has] permitted;” in other words, God demands more decent conduct from people than can be practiced in the world where he has placed us. How does Hardy’s novel as a whole support this assertion? Do you find it to be true?

Later in the same chapter, after Tess’s rape by Alec and the death of her baby, Hardy writes that his heroine has “changed from simple girl to complex woman.” Her eyes “more eloquent” and her mind more reflective, she has become a “fine creature.” Hardy even suggests that her mistreatment might be deemed “simply a liberal education.” Is Hardy right to make the seemingly outrageous contention that Tess’s abuse has aided in her growth and improvement? What does he appear to be saying about the natures of suffering and human morality?

Hardy offers a marked contrast between the pastoral tranquility of Crick’s dairy and the mechanized fury of Groby’s farm, shown particularly in Chapter XLVII. What is Hardy’s opinion of modern technology?

Is Tess of the D’Urbervilles more accurately seen as a protest against unjust moral and social tenets, or an acknowledgment that such structures will always exist?

What, finally, is to blame for Tess’s tragedy? Does it stem principally from sexual desire? From her own ready acceptance of the victim’s role? From poor communication? From despicable timing? From her parents’ benighted ambitions? Or does it result, as her brother Abraham suggests, from living on a “blighted” star?

Near the end of the novel, the doomed Tess suggests that Angel should marry her sister, ‘Liza-Lu. Do you think this would be a successful marriage? State your reasons.

Imagine that you are Tess’s lawyer in her prosecution for the murder of Alec. What arguments would you use, and do you think they would succeed?

Hardy once wrote, “The best tragedy . . . is that of the worthy encompassed by the inevitable.” Using this definition, or substituting your own, assess whether Tess of the D’Urbervilles is one of the “best” kinds of tragedy.