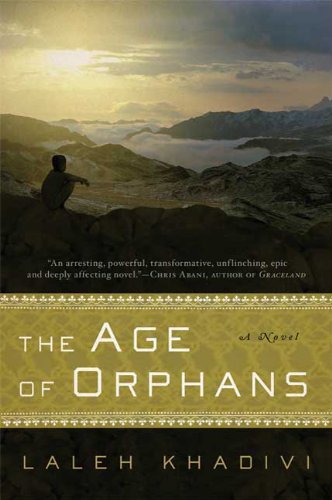 THE AGE OF ORPHANS

The boy wants nothing more than his maman’s lap and a view of the birds that soar over his Kurdish village. Nameless, impressionable, and watchful, the boy soon becomes a man in a mountaintop ritual with his baba, uncles, and cousins. And as a man, he must join the male villagers when they march to war against the shah’s army. But the Kurds, fierce protectors of their homeland against centuries of invasion, fall to the shah; the boy’s father is massacred before his eyes. As the only survivor, adopted by the very soldiers that murdered his father, the boy begins a new life as Reza Pejman Khourdi—conscripted soldier for the new Iran.

The boy wants nothing more than his maman’s lap and a view of the birds that soar over his Kurdish village. Nameless, impressionable, and watchful, the boy soon becomes a man in a mountaintop ritual with his baba, uncles, and cousins. And as a man, he must join the male villagers when they march to war against the shah’s army. But the Kurds, fierce protectors of their homeland against centuries of invasion, fall to the shah; the boy’s father is massacred before his eyes. As the only survivor, adopted by the very soldiers that murdered his father, the boy begins a new life as Reza Pejman Khourdi—conscripted soldier for the new Iran.

Ten years later, in Tehran, Reza is notorious within the Iranian army for his cruelty against Kurds, so-called rebels who fight against an Iran they cannot believe in. Promoted to captain, Reza is ordered to find a Tehrani bride and move back to Kermanshah, his homeland, to enforce the shah’s rule. Reza tells no one he is a Kurd, suppressing all memories of his maman’s tenderness and his baba’s bravery. He weds Meena, secretly hoping to banish his orphan loneliness in her genteel breeding. But Meena has other ideas: when she sets foot in Kermanshah, she is horrified by the lot of a captain’s wife, living among Kurds who look suspiciously like her husband. Reza and Meena fight savagely for dominance—over each other, over the Kurdish villagers, and over the mountainous land itself.

Poetic in its dark beauty, The Age of Orphans casts the clash between tradition and modernity in a new light—as a doomed war within one orphan’s psyche.

Laleh Khadivi was born in Esfahan, Iran, in 1977, but fled with her family to the United States in the aftermath of the Islamic Revolution. The Age of Orphans is the first novel in a projected trilogy that will trace three generations of a Kurdish family—based loosely on her own—as they make their way to the United States and undergo the profound transformations of the immigrant experience.

“This is a stunning debut . . . unflinching, gorgeously poetic, intimate yet with a wondrous sweep of history. To read the tale of Reza Khourdi is to take a journey deep inside the darkest cavity of the heart.” —Cristina Garcia, author of National Book Award finalist Dreaming in Cuban

“The Age of Orphans is an arresting, powerful, transformative, unflinching, epic and deeply affecting novel. I cannot recommend it enough. A major voice to watch.” —Chris Abani, author of Graceland and The Virgin of Flames

“Laleh Khadivi is genuinely gifted and ruthless with that gift. We are all so fortunate that she is, for it takes both talent and ruthlessness to delve this deeply into an epic life.”—Dorothy Allison, author of National Book Award finalist Bastard Out of Carolina

“Khadivi… has a lyrical style reminiscent of The English Patient author Michael Ondaatje as she strings images of a bustling Tehran or the stillness of the Zagros Mountains. The Age of Orphans evocatively captures the desperate longing for home, family and a life erased. It’s an affecting tale.”
— Cody Corliss, The Plain Dealer (Cleveland)

A Kurdish proverb, “It is more difficult to contend with oneself than with the world,” serves as an epigraph to The Age of Orphans. How does this proverb speak to Reza Khourdi’s life?

Reza’s fascination with birds—from the boy’s flying fantasies to the captain’s pet falcon—endures throughout his lifetime. What is the source of his bird obsession? When the birds speak in the novel, proclaiming, “Of earth, we see all” (47), what do they see in the boy and his people?

Maman tells her own story of orphanhood and coming-of-age. What qualities has Maman passed along to her son? How does her story resemble her son’s, and how does it differ?

Describe the boy’s emotions during his father’s violent death. What is the source of the boy’s shame, as well as his choice to banish his father to “a damp purgatory of forget and never-remember”? (67) What impact will these forgotten emotions have on the boy’s future?

Images of boots recur throughout The Age of Orphans. Discuss passages where boots appear, and consider what they might symbolize to Reza at different times in his life.

Consider the significance of Reza’s name. Why is he nameless until he is conscripted into the army? What is the meaning of his new name? Why is he assigned the third name “Pejman,” in addition to “Reza Khourdi”?

Discuss Reza’s military training and social life in the army barracks. When is he able to find community with his fellow cadets, and when does he part from his peers? Why do the boys reassert ethnic differences after a like-minded period as “sameskins, brethren”? (88) Why does Reza ultimately lie to betray a fellow conscript, the Baluch twin, and what are the consequences of his lie?

When Reza believes he is fifteen years old, the number is actually “an orphan age, as declared by the spurious newlyweds Baba Shah and Maman Iran.” (114–15) What is the difference between a calendar age and an “orphan age”? How does this “orphan age” assert itself upon Reza’s identity?

Describe Reza’s experience in Saqqez, the Kurdish village he invades with the shah’s army. How do Reza’s actions in Saqqez determine his future as a soldier and as a Kurd? How do his victims, particularly the little boy with a similar face and the girl he rapes, respond to his violent acts?

What are Reza’s first impressions of Meena as he watches her father’s funeral procession from a rooftop in Tehran? What does he see in Meena? Which of her qualities does he not yet see?

The Khourdis’ wedding night is narrated from both Reza’s and Meena’s points of view. Compare their descriptions of the marriage and its consummation. How do their perspectives of this event differ? How do their different experiences bode for the future of the marriage?

Why does the shah’s army command Reza to return to Kermanshah? What is the reasoning behind this “rare move … to put [him] back so close to the nest?” (202) Does Reza fulfill the army’s expectations in Kermanshah? Why or why not?

How do the Kurds in Kermanshah react to the formation of Iran as a nation? How do they view outsiders like the shah’s soldiers? How do outsiders view the Kurds? What is their attitude toward Reza and his changes to their schools, farming practices, and other elements of daily life? How do they handle the open secret of Reza’s Kurdish identity?

Discuss Reza’s connection to the land, from the farmlands of his childhood to the winding streets of Tehran to the Zagros Mountains outside Kermanshah. At what points in his life is he particularly attached to nature and the land? In the end, does Reza have a true homeland? Why or why not?

The struggles of Reza and his tribe are representative of the larger Kurdish struggle of the twentieth century. What does Reza’s experience show us about some of the personal elements at work behind larger geopolitical developments? How do the tribal populations of the Middle East and ancient internal conflicts play a role in the current crises that plague the region?

After Meena’s death, Reza says of his children, “I have orphaned them just as I was once orphaned and now they have absconded from these stone palaces and abandoned me in the shadows of their escapes.” (286) What are Reza’s motivations for orphaning his children? What consequences, if any, does he suffer for the murder? What are some possible futures for Reza and Meena’s six children—how might this cycle of violence and orphans continue or end?

Discuss Laleh Khadivi’s unique writing style, and point to passages that are particularly poetic or moving. What is the effect of the multiple perspectives that contribute to the novel? How would the novel be different if it were narrated solely from Reza’s point of view?