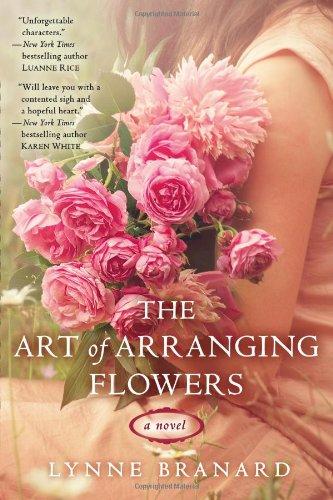 THE ART OF ARRANGING FLOWERS

A moving and eloquent novel about love, grief, renewal—and the powerful language of flowers.

Ruby Jewell knows flowers. In her twenty years as a florist she has stood behind the counter at the Flower Shoppe with her faithful dog, Clementine, resting at her feet. A customer can walk in, and with just a glance or a few words, Ruby can throw together the perfect arrangement for any occasion.

Whether intended to rekindle a romance, mark a celebration, offer sympathy, or heal a broken heart, her expressive floral designs mark the moments and milestones in the lives of her neighbors.

A moving and eloquent novel about love, grief, renewal—and the powerful language of flowers.

Ruby Jewell knows flowers. In her twenty years as a florist she has stood behind the counter at the Flower Shoppe with her faithful dog, Clementine, resting at her feet. A customer can walk in, and with just a glance or a few words, Ruby can throw together the perfect arrangement for any occasion.

Whether intended to rekindle a romance, mark a celebration, offer sympathy, or heal a broken heart, her expressive floral designs mark the moments and milestones in the lives of her neighbors. It’s as though she knows just what they want to say, just what they need.

Yet Ruby’s own heart’s desires have gone ignored since the death of her beloved sister. It will take an invitation from a man who’s flown to the moon, the arrival of a unique little boy, and concern from a charming veterinarian to reawaken her wounded spirit. Any life can be derailed, but the healing power of community can put it right again.

Lynne Branard is a pseudonym for New York Times bestselling author Lynne Hinton. She has written more than a dozen books, including Friendship Cake, Pie Town, and Welcome Back to Pie Town.

“I devoured this book…There is art and beauty in this story that will linger after the final scene.”—Debbie Macomber, #1 New York Times bestselling author of Rose in Bloom and Starry Night

“An expertly penned and tender tale about the blossoming of hearts amidst the storms of loss and grief.”—Richard Paul Evans, #1 New York Times and USA Today bestselling author

“Captured my heart on the first page…A beautiful novel filled with tender wisdom and unforgettable characters who understand love, loss, and the alchemy of just the right flowers.”—Luanne Rice, New York Times bestselling author of The Lemon Orchard

“Branard is a masterful storyteller who understands the human heart and all its trials, tribulations, and joys…A pure delight to read.”—Darien Gee, international bestselling author of The Avalon Ladies Scrapbooking Society

that cannot be forgiven.” Why do flowers symbolize something

so paramount that missing a delivery would be a disaster?

What crucial roles do flowers play in relationships—

plants as “stems of short, curved, tender blades,” and “white with

little narrow lips of purple.” Do you think Ruby expresses her sensuality

through her trade? Do you think her passion for flowers is

a stand-in for other longings?

Nora and Jimmy are both alcoholics, and their relationship is

rooted in the recovery process. How do Ruby and Dan forge a

similar (platonic) bond, and what fuels that bond?

Jimmy tells Ruby that she has a reputation for “fixing hearts.”

And much later, Nora echoes that the whole town has expressed

that sentiment. In “fixing” others’ hearts, how might Ruby

have neglected her own? Can empathy overextend into self-

if I were seeing something of myself . . . I felt as if I were somehow

connected to these great beings.” Have you ever felt that kind of

ineffable connection that Dan describes? Was it with a person, or

a place, or a thing—

Will says, “Sometimes I worry that everybody I love will die.”

the tragic loss of a loved one. How do they find ways not to live

in the constant fear that Will expresses?

What is the symbolic significance of Clementine’s encounter with

the porcupine and Ruby’s interference—

How is that a watershed moment in Ruby’s life?

Ruby’s and Will’s lives are both wrought with tragedy. In the prologue,

“strong in the broken places.” How is this both true and false?

How do Will and Ruby reflect the truth in this, and where do they

find their strength, or solace?

The title points to how serious and sacred a flower arrangement

can in fact be. Do you think Ruby’s flower arrangements function

as characters in the novel? If so, at what crucial moments do they

bring other characters together, and in what significant events do

they play a part?

Barring the prologue and epilogue, the story begins and ends on

Stan and Viola Marcus’s anniversary. Ruby always has the same

exchange with Stan: She remembers his anniversary, and he leaves

her shop after stating that he is “the lucky one.” Why did the author choose to bookend the novel in this way? How is Stan’s

relationship with his wife emblematic of what marriage means?

Were you surprised that Ruby changed her mind and decided to

adopt Will? Did you think it was a wise or unwise choice? How

day of Ruby’s death? What role does death play in the book that

makes it a fitting ending?

During the conversation with Dan about whether or not Ruby will

adopt Will, Dan explains the mechanics of how flowers bloom. “It

turns out that the instabilities that shape roots and blossoms often

come about when certain cells become longer than others. The

rapid growth causes strain, which bends the soft tissues. . . .” What

is he really telling Ruby? How does the “biology of blooming”

manifest itself in her life?

Ruby is near paralyzed by her sister Daisy’s death, until she finds

window. How does the art of arranging flowers take the place of

her sister had not died?

The Greeks had four words for love: eros, agape, philia, and storge

love). How do we see these different types of love manifested in