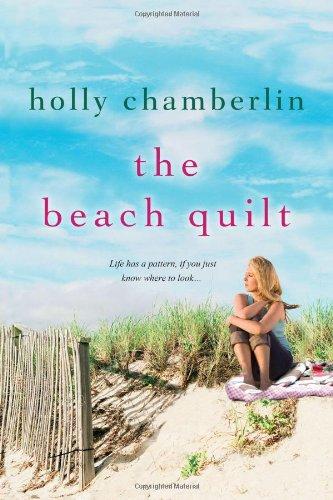 Set in a picturesque Maine beach town, bestselling author Holly Chamberlin's heartwarming and insightful novel delves into the choices and changes faced by two families over the course of one eventful summer.

Everyone in Yorktide, Maine, knows sixteen-year-old Sarah Bauer. She's a good student and a dutiful daughter, as well as a beloved best friend to Cordelia Kane. So it's a surprise to all when sensible Sarah reveals that she is pregnant.

Though shocked, Sarah's family is supportive. But while Sarah reconciles herself to a new and different future, the consequences ripple in all directions. Her father–a proud,

Set in a picturesque Maine beach town, bestselling author Holly Chamberlin's heartwarming and insightful novel delves into the choices and changes faced by two families over the course of one eventful summer.

Everyone in Yorktide, Maine, knows sixteen-year-old Sarah Bauer. She's a good student and a dutiful daughter, as well as a beloved best friend to Cordelia Kane. So it's a surprise to all when sensible Sarah reveals that she is pregnant.

Though shocked, Sarah's family is supportive. But while Sarah reconciles herself to a new and different future, the consequences ripple in all directions. Her father–a proud, old-time Mainer–tries to find more work to defray expenses. Her younger sister grapples with a secret she can't share. Cordelia feels abandoned, and Cordelia's mother faces the repercussions of a long-ago decision. As Sarah's mother, Cindy, frets about how she'll juggle childcare with her job at the local quilting store, she seizes on an idea: to band together and make a baby quilt. Piece by piece, a beautiful design emerges. And as it progresses, reflecting the hopes and cares of the women who create it, each will find strength in the friendship and love that sustains them, in hardship and in joy.

Holly Chamberlin was born and raised in New York City. While other kids were playing in the park, she was in the library reading or scribbling stories. She earned a Bachelor’s and a Master’s degree in literature from New York University, after which she worked as an editor at several publishing houses for nine years. In 1996 she moved to Boston, married, and established first a career as a ghostwriter, and then a career as a novelist of her own fiction. In 2003 she and her husband moved to Maine where she is currently working on her tenth novel, with the help of her cats, Cyrus and Betty.

Sarah’s sudden vulnerability awakens vulnerabilities in Adelaide, Cordelia, Cindy, and Stevie. More than ever each feels the need for succor, attention, support, and sympathy. Talk about how closely we adopt our friends’ pain and experience it as somehow our own. Do you think this is something women experience more than men, a sort of sympathetic engagement in the lives of those we love? Do you think this tendency is something taught or inherent—or, perhaps, both?

Courageous actions come in many forms. Talk about the acts of courage each of the main characters perform. For example: Stevie’s coming out to Cordelia and later, to her parents; Cordelia’s care of Stevie, her habit of standing up to bullies, her willingness to share parts of her true self (Pinky with Stevie and her foolish thoughts about losing her virginity to John Blantyre with Sarah); Sarah’s decision to keep the baby (was her brief attempt to offer him for adoption an act of courage or desperation?); Cindy’s attempts to have a family and her willingness to adopt Henry; Adelaide’s decision to give up her son and then her willingness to welcome him back into her life.

Do you think that Cindy’s refusal to sell the quilts is an act of selfishness? If her original idea of selling them was made in haste, is she justified in changing her mind? The quilts are hers, though their sale would benefit her family. When is one justified in not making a sacrifice for loved ones?

Consider the notion of what it means to “act out of character.” For example, Cordelia tends to underestimate her strengths and abilities, almost playing to an image of the silly young girl. Why do you think she engages in this sort of self-deprecation? How much of it is conscious or chosen? How much of it is the result of an image she has allowed others to create for her? Sarah wonders if she was ever really the responsible person people thought she was, or if she had been like an actor assuming a role written by someone else. Cindy feels resentment at having been placed in her current situation and is surprised to discover there are limits to her willingness to sacrifice for her family. We see mild-mannered Joe express the desire to kill Justin. Does anyone ever achieve a perfect harmony between the person inside and the person perceived? Or is there always tension between two perceived halves—halves that are really one complicated whole?

Adelaide briefly contemplates cutting all ties with her parents. Do you think she would be justified in doing so? After all, she feels she gets nothing positive from the relationship. But how can she really know what (if anything) her mother gets from it—good or bad, conscious or unconscious? When is someone justified in saying, “I appreciate the good things you have done for me, but I cannot forget or forgive the bad things”? Do blood ties require loyalty, or is loyalty a choice?

At one point Jack reminds Adelaide that Cordelia is a typically naive and self-righteous teenager, for whom the world is black and white and actions right or wrong. How do Cordelia and Sarah and Stevie mature (become more nuanced) over the course of the book? After Sarah’s death, Cordelia and Stevie are convinced that they will never be happy again. If they were older, do you think they would feel so sure of a dark future? How does age and experience change the process of grieving and recovery? Consider Cindy. Though devastated by the loss of her older daughter, she knows she has a duty to her remaining daughter, husband, and grandchild—as well as to herself—to carry on. Consider Adelaide’s process of recovery from the loss of her first child. How complete or successful has her recovery been, and how does Sarah’s pregnancy affect her healing?

“No person is an island.” How does Sarah’s pregnancy affect the lives of each of the other main characters, in ways both mundane and psychological or emotional? Is anyone better off for the changes wrought by Sarah’s getting pregnant? Is anyone worse off for having spent the final months of her life by her side? Stevie and Cordelia tell us they see no rhyme, reason, or good having resulted from Sarah’s death. Could an argument be made against that opinion?

Consider Cindy’s keeping secrets from Joe—the call from Mrs. Morrow; her decision to sell the heirloom quilts; and Sarah’s offer to put her baby up for adoption. In the first case, Cindy feels she is protecting her husband from further grief. In the second and third cases, she is afraid that he will oppose her opinions and thwart her will. How do you think Joe would feel if he knew his wife was withholding information, thoughts, and feelings from him? How does stress cause a person to act in unexpected and perhaps less than fully honest ways?

Cindy has trouble remembering that Sarah’s baby is not her own. Adelaide has trouble distancing her remembered teenage self from the pregnant teenage Sarah. Talk about why each woman might have difficulty establishing emotional boundaries in this situation. On a related note, Adelaide, tempted once again to search for the father of her son, suddenly rejects the notion as a betrayal of her relationship with her husband. Do you think this feeling of guilt is justified, given the fact that Jack knows all about her past? Or is something else keeping Adelaide from pursuing her former lover?

How might Sarah’s being pregnant have influenced Stevie’s decision to come out to Cordelia as gay? If Cordelia hadn’t become a friend, do you think Stevie would have been able to come out to her friends from school? Would she have chosen to confide in Sarah instead?