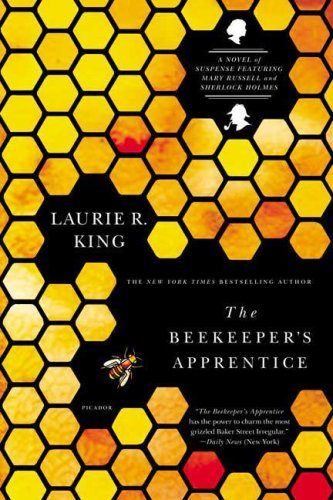 The Beekeeper’s Apprentice is the first in a series of books to follow the adventures of Mary Russell, a gawky, egotistical, recently orphaned young lady who literally falls into the lap of Sherlock Holmes. Though he appears long retired from crime fighting, and is quietly engaged in raising honeybees on his Sussex estate, Russell piques his interest and in short order impresses the detective with her intellect and powers of deduction. Under his tutelage, this very modern twentieth century woman proves a deft protégée and a fitting partner for the Victorian detective, and in this first volume,

The Beekeeper’s Apprentice is the first in a series of books to follow the adventures of Mary Russell, a gawky, egotistical, recently orphaned young lady who literally falls into the lap of Sherlock Holmes. Though he appears long retired from crime fighting, and is quietly engaged in raising honeybees on his Sussex estate, Russell piques his interest and in short order impresses the detective with her intellect and powers of deduction. Under his tutelage, this very modern twentieth century woman proves a deft protégée and a fitting partner for the Victorian detective, and in this first volume, we witness the formative years of a character who will grow and develop over many books to come.

The Beekeeper’s Apprentice also paints a historically accurate picture of what it is like to live as a woman in misogynistic times. Between the strands of the mystery, King threads her own subtle commentary on how war transforms social status, and the mutability of gender roles even under oppressive circumstances. In addition, Beekeeper is a faithful and formally impressive foray into the world of Conan Doyle, one that carefully evokes the voice of Sherlock Holmes while at the same time presenting him with a new foil, and fresh adventure. King revives the literary tradition of Conan Doyle, and all of its pleasures, but from a distinctly different point of view.

In their first case together, they must track down a kidnapped American senator’s daughter and confront a truly cunning adversary–a bomber who has set trip wires for the sleuths and who will stop at nothing to end their partnership. Full of brilliant deductions, disguises, and dangers, this first book of the Mary Russell–Sherlock Holmes mysteries is “wonderfully original and entertaining . . . absorbing from beginning to end” (Booklist).

“A fascinating and often moving account of a friendship so unusual and so compelling that one almost accepts it as being historically real.” —The Denver Post

“Enchanting . . . The Beekeeper’s Apprentice is real Laurie R. King, not faux Conan Doyle, and for my money, it’s better than the original.” —San Jose Mercury News

In an Editor’s Preface, King playfully discloses the “true” origin of the story at hand: that what follows will be the actual memoirs of Mary Russell, which were mysteriously sent to her out of the blue, along with a trunk full of odds and ends. Why does King begin with this anecdote, essentially including herself in the story? Does it bring the world of the novel closer to our own? Have you read any other books (Lolita, for example) which begin with a false-preface, and what effect does this device have on the rest of the novel? Were you fooled?

It is 1915, the Great War is raging through Europe and the men of England are in the trenches. How does this particular period in history allow a character like Mary Russell to take the stage in areas of post-Victorian society usually reserved for men? In what significant ways does she seize these opportunities? Would she have thrived if born into a different, more oppressive social climate, say, one hundred years earlier?

How would you characterize Mary Russell based on her first opinion of bees? Does her disdain for their mindless busy-work and adherence to hive social structure reflect a particular attitude toward the social landscape of England at the time? Do you agree with Mary?

Holmes uses the game of chess to sharpen Mary Russell’s strategic thinking and intuition. How does chess—and, in particular, the Queen—serve as a metaphor throughout the story? In what ways does King herself use the game to comment upon the master-apprentice relationship?

Russell and Holmes don disguises throughout The Beekeeper’s Apprentice, and their work sometimes requires them to cross dress. Discuss each point in the novel where either Russell or Holmes takes cover in the opposite sex; what special access does this method of disguise give them to the other characters? Is gender reversal necessary in order to win the confidence of certain people? How does Mary Russell’s world change when she dresses as a man?

Watson is eternally known as the great detective’s sidekick. Who, in your opinion, is a more effective foil for Holmes, Watson or Russell? What different aspects of Holmes’s personality emerge in the presence of each? What would happen if Holmes were paired with a different partner, one more timid or less tenacious?

At Oxford, Mary Russell concludes that theology and detective work are one and the same. In your opinion, how are the two subjects related?

The art of deduction is constantly at play in The Beekeeper’s Apprentice. Even when Mary notices that Watson has shaven off his mustache, she cares to look closer at the skin and imagine that it was done “very recently.” Is Laurie King training the reader’s perceptions to be more acute throughout the novel? Does every detail of our lives hold a mystery and a story?

What are some crucial differences between the training Patricia Donleavy received from Moriarty and the training Mary Russell received from Holmes? What mental and emotional strengths do both women have in common, and what separates them? Holmes comments: “A quick mind is worthless unless you can control the emotions with it as well.” How does this maxim apply?

At what point in the novel did you suspect that Russell’s adversary was a woman? When you read a mystery, what assumptions do you typically make about the gender of the villain? In what ways does King toy with the reader’s assumptions about gender throughout the novel?