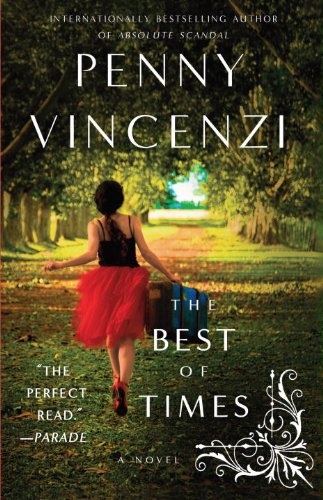 THE BEST OF TIMES

In a matter of seconds, absolutely everything can change …

In this masterfully crafted page-turner, peopled with intense characters and centered on one devastating moment that involves them all, plot-twist queen Penny Vincenzi vividly captures how the actions of one person can dramatically affect many in the blink of an eye.

On an ordinary Friday afternoon, on a major motorway outside of London, a trailer truck suddenly and violently swerves across fives lanes of traffic—careening cars into one another like dominoes and leaving a trail of chaos and confusion.

In a matter of seconds, absolutely everything can change …

In this masterfully crafted page-turner, peopled with intense characters and centered on one devastating moment that involves them all, plot-twist queen Penny Vincenzi vividly captures how the actions of one person can dramatically affect many in the blink of an eye.

On an ordinary Friday afternoon, on a major motorway outside of London, a trailer truck suddenly and violently swerves across fives lanes of traffic—careening cars into one another like dominoes and leaving a trail of chaos and confusion. Within the space of a minute, an astounding miles-long pileup has amassed, and, as the survivors await help, their stories unfold.

Vincenzi expertly maneuvers the plot between the panic-stricken husband trapped in his car with his young mistress, his adultery sure to be discovered; the bridegroom trying frantically to get to the church on time (he won’t); the widow on her way to reunite with the love of her life after sixty years, now forced to ponder whether she’ll ever see him again; the junior doctor waiting to receive the crash victims in the ER … And at the epicenter of this field of destruction lies the truck driver, suffering from memory loss, while the mysterious hitchhiker, the only person who knows what really happened, has fled the scene.

Spellbound by these intimate and evocative tales, we watch as fate takes its powerful course and the far-reaching effects of the crash ripple through the lives of hundreds of people. Written with incredible verve, candor, and wit, Penny Vincenzi reveals human behavior in all its fascinating detail as she challenges her characters to face crisis boldly—and she surprises us with the results at every turn.

Penny Vincenzi is the author of several novels, including No Angel, Something Dangerous, and Into Temptation. Before becoming a novelist, she worked as a journalist for Vogue, Tatler, and Cosmopolitan. She lives in London.

“Penny Vincenzi is poised to fill the gap in the American realm of Cinderella fiction. With so few current writers able to summon the quaint allure of such women’s fiction without stooping to sensationalism, Ms. Vincenzi really is an anomaly.” —Janet Maslin, New York Times

“She’s the plot-twist queen.”
—Adriana Trigiani, author of the Big Stone Gap trilogy and The Queen of the Big Time

The role of chance in our lives is a major theme in this novel. Given the outcomes of the accident for the main characters, how do you interpret the difference between chance and fate in the book? Do you believe in fate?

There are many depictions of women in the novel, both young and old. Did you find the female characters true to life? Who did you relate to most?

The accident is the pivotal moment in the plot when the characters’ lives collide and are changed forever for better or worse. In that moment, which character did you find yourself sympathizing with most and why? Do you have any real anecdotes about traumatic life-altering moments that you’d like to share?

In the beginning, many of the characters such as Jonathan, Toby, and Abi are portrayed as morally ambiguous. Which characters did you find most difficult to categorize and why? Did anyone surprise you by how they changed in the aftermath of the crash?

In many ways, the accident is just as traumatic for those characters who were not on the M4. Did you sympathize with any of them more than with the crash victims?

Penny Vincenzi is known for creating large casts of characters and alternating quickly between them. Did you like the continuously shifting narration? Did you find that this style successfully contributed to the tension and suspense in the novel?

Everyone makes mistakes sometimes, and terrible mistakes play a large role in this novel. When Daisy gets hit by a car, did you agree with how Jonathan responds to his son Charlie’s guilty confession? Do you think it is fair to blame a person for something he/she could never have predicted? Do you think the treatment of the issue of blame is handled well in the novel?

Were you surprised that Georgia fled the scene of the accident? Did this storyline successfully add an element of mystery to the plot for you?

It’s often said that love is a fickle thing. In the case of Barney and Amanda, for instance, how much did chance have to do with their ultimate break-up? Do you think they would have stayed together, if Barney hadn’t met Emma at the hospital?

An allusion to the famous first line of Charles Dickens’ A Tale of Two Cities, the title of this novel could be interpreted as ironic. Do you think some of the characters’ lives were ultimately changed for the better? Was this realistic to you? Do you believe that something good always comes out of something bad?

The final part of the novel is entitled “Moving On”. Were you convinced that each character successfully moved on? Were you unsure how any of the relationships would fare in the future? If so, which one?

The Best of Times is Penny Vincenzi’s sixth novel published in the United States. Have you read any of Penny’s previous books? If so, how does this one compare?