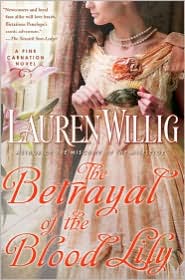 THE BETRAYAL OF THE BLOOD LILY

Whisked away to nineteenth-century India, Penelope Deveraux plunges into the court intrigues of the Nizam of Hyderabad, where no one is quite what they seem. New to this strange and exotic country—where a dangerous spy called the Marigold leaves venomous cobras as his calling card—she can trust only one man: Captain Alex Reid.

Whisked away to nineteenth-century India, Penelope Deveraux plunges into the court intrigues of the Nizam of Hyderabad, where no one is quite what they seem. New to this strange and exotic country—where a dangerous spy called the Marigold leaves venomous cobras as his calling card—she can trust only one man: Captain Alex Reid.

With danger looming from local warlords, treacherous court officials, and French spies, Alex and Penelope may be all that stand in the way of a plot designed to rock the very foundations of the British Empire…

Lauren Willig is the author of six previous Pink Carnation novels. She has a graduate degree in English history from Harvard and a J.D. from Harvard Law School, though she now writes full time. Willig lives in New York City.

“Another strong-willed woman involved with an English aristocrat. Willig hasn’t lost her touch; this outing has all the charm of the previous books in the series.” —Publishers Weekly

Lauren Willig employs nineteenth-century India and modern-day London as the settings for The Betrayal of the Blood Lily. If you had to choose two different places or eras in which to set this book, which would they be?

What did you think of Penelope when she was first introduced? Did your opinion of her change as the novel progressed?

“She hated that name. It was like a shackle around her neck, engraved with the name of her master” [page 53]. Talk about Penelope’s resistance to conventions such as manners, marriage, and mores. Why did she buck authority so much? Why do you think she was attracted to Alex, who appeared to be the personification of tradition and honor?

Which figures in the nineteenth-century story line most resemble some of the modern-day characters, such as Eloise, Colin, or Serena?

Willig created Eloise as a first-person protagonist, but chose to tell Penelope’s story indirectly, through a third-person narrator. As a reader, do you prefer being “in the head” of a character, or would you rather experience their stories through the filter of an outside party? Would the novel have been different if Eloise and Penelope’s perspectives were swapped?

Captain Alex Reid first appears as a mysterious figure. Initially, did you have any clues to what he might have been hiding? What did you think of him as his secrets were revealed?

The portion of The Betrayal of the Blood Lily devoted to Penelope is longer than Eloise’s part. Did you want to read more about Eloise, and/or less about Penelope? Or did you find the balance between the two story lines to be satisfactory?

“When had it become about making Captain Reid jealous?” [page 207]. Answer this question yourself: What was Penelope’s motivation here? Why did she feel compelled to stoke Alex’s protectiveness?

Once the identity of the Marigold was revealed, were you shocked or surprised? What were some hints that might have pointed to who the Marigold really was?

Given his principled nature, was it surprising that Alex worked to construct the cover-up described in Chapter Thirty-One? Why did he work so hard to shield his brother from scrutiny?

Prior to reading The Betrayal of the Blood Lily, what did you know about India in the nineteenth century, and Britain’s interests in the country?

Eloise and Colin, Alex and Penelope: Discuss some of the couples in The Betrayal of the Blood Lily. What did you think of them? Which were the more unlikely pairs?

In its praise for the Pink Carnation series, USA Today has said that “Pride and Prejudice lives on.” Do you agree with this characterization? Can you think of other authors or series to compare to Lauren Willig and her Pink Carnation books?