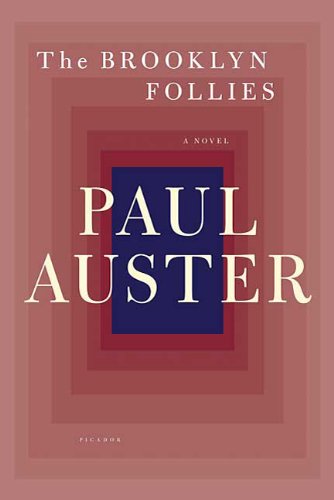 Nathan Glass has come to Brooklyn to die. Divorced, retired, estranged from his only daughter, the former life insurance salesman seeks only solitude and anonymity. Then Glass encounters his long-lost nephew, Tom Wood, who is working in a local bookstore. Through Tom and his charismatic boss, Harry, Nathan’s world gradually broadens to include a new set of acquaintances, which leads him to a reckoning with his past.

Nathan Glass has come to Brooklyn to die. Divorced, retired, estranged from his only daughter, the former life insurance salesman seeks only solitude and anonymity. Then Glass encounters his long-lost nephew, Tom Wood, who is working in a local bookstore. Through Tom and his charismatic boss, Harry, Nathan’s world gradually broadens to include a new set of acquaintances, which leads him to a reckoning with his past.

Paul Auster is the bestselling author of Travels in the Scriptorium, Oracle Night, and Man in the Dark, among many other works. I Thought My Father Was God, the NPR National Story Project Anthology, which he edited, was also a national bestseller. His work has been translated into more than thirty-five languages. He lives in Brooklyn, New York.

“A charming, beguiling story about the terrible beauty of families and the redemptive power of love . . . Auster’s writing is packed with surprises.”—USA Today

“Probably the first authentic attempt to deal with the post–September 11 world . . . It is a multilayered tapestry, with whimsical chapter headings and Dickensian depth.”—San Francisco Chronicle

“Auster has written a sublime soap opera about the ways in which people abandon and save one another. He captures a historical moment, our twisted America, and he offers a message of hope. Love will save us. We will save each other. Auster employs tough-guy talk and funny, believable stories of folly in his search for wisdom and goodness.”—The Boston Globe

What role does redemption play in the novel? Nathan tells us that he returned to Brooklyn because “I was looking for a quiet place to die,” and yet he manages to build a quirky, vibrant life. What are some other examples of redemption in the book?

The need for companionship both causes pain for the characters in The Brooklyn Follies and at the same time offers them fulfillment. What alliances and loves develop which demonstrate this need? How do the need for community and the need for love distinguish themselves or blend into one another?

Nathan claims that he is not the central character of this story. “The distinction of bearing the title of Hero of this book belongs to my nephew, Tom Wood.” In what ways is this statement misleading? In what ways is it accurate? Why would Nathan make such a claim?

Coincidence plays a huge role in The Brooklyn Follies: Nathan finding Tom at the book store, for example, or Nathan’s car breaking down in Vermont and leading to The Chowder Inn. How is both the plot and character development driven by chance, or twist of fate, in this novel?

When Nathan first encounters his nephew Tom, he sees that his favorite relative has become “a sad sight to behold . . . everything about him suggested defeat.” How do Tom’s failures mirror Nathan’s disappoints about his own life, his own fate at the outset of the novel, prior to the revitalization of his life? How do their respective recoveries also reflect one another?

Contemporary American fiction often focuses on the individual; The Brooklyn Follies weaves a tapestry of community. In the suburbs, where Nathan felt isolated, he believed his life was “sad and ridiculous.” He comes to Brooklyn seeking solitude and yet finds kinship almost by accident. What do you see in this commentary on city life versus suburban life?

In this novel, how does Brooklyn act as a fortress of reason vis-à-vis the rest of the country? What damage do we see wrought outside of the city and corrected as a result of a character’s move to the urban environment?

How would you describe Nathan’s style as a narrator? What are the advantages and disadvantages does this style of narration?

The Brooklyn Follies ends forty-six minutes before the attack on the World Trade Center, with Nathan Glass “happy, my friends, as happy as any man who had ever lived,” having just been released from the hospital after his second near-death experience. What do you think Auster is trying to convey to his audience with this reminder of the complicated and dangerous world in which we live? In what ways does the book highlight the differences of pre- and post-9/11 life in America?

“Another ex,” says Harry Brightman. “By the time a man gets to be our age, Nathan, he’s little more than a series of exes.” By the time we have reached the end of The Brooklyn Follies, is this statement still applicable to Nathan’s life? Why or why not?

In reference to Tom’s discovery of pictures of his sister Aurora in a pornographic magazine, Nathan says, “When you’ve lived as long as I have, you tend to think you’ve heard everything, that there’s nothing left that can shock you anymore . . . then, every once in a while, something comes along that jolts you out of your smug cocoon of superiority, that reminds you all over again that you don’t understand the first thing about life.” What are some other occasions during which Nathan experiences this sort of jolt? Do any other characters find themselves jolted as such?

In comparing Poe and Thoreau, Tom Wood has selected two American authors who were very much interested in the idea of sanctuary. How do the spirits of these two authors and the respective sanctuaries they sought infuse Tom and Nathan’s interactions? What other giants of American literature have an influence, direct or indirect, on the characters in The Brooklyn Follies?

“You love life,” says Nathan to Tom, “but you don’t believe in it. And neither do I.” This statement quickly becomes untrue as both men cast off their inertia. To what extent does action create belief for both Nathan and Tom? What obstacles to action do they face and overcome?

“All men contain several men inside them and most of us bounce from one self to another without ever knowing who we are,” says Nathan. While he is a rather self-aware individual, in what ways does Nathan surprise himself with another self?

How is this a book of both happy endings and terrible fates? Cite examples of how Auster intersperses and intertwines these two seemingly irreconcilable states.