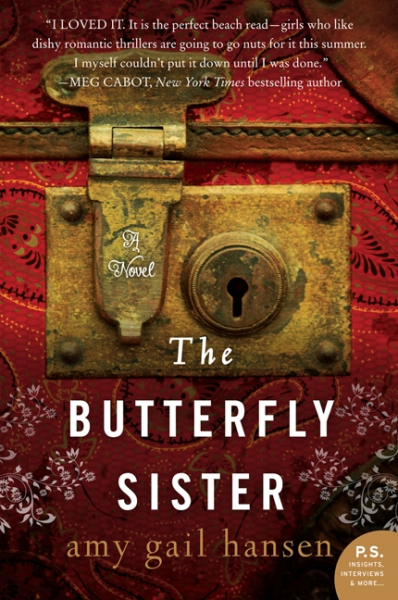 The past just arrived on Ruby’s doorstep . . .

To uncover the truth about a friend’s disappearance, a fragile young woman must silence the ghosts of her past in this moving debut tale that intertwines mystery, madness, betrayal, love, and literature.

“My past was never more than one thought, one breath, one heartbeat away. And then, on that particular October evening, it literally arrived at my doorstep.”

Twenty-two-year-old Ruby Rousseau is haunted by memories of Tarble, the women’s college she fled from ten months earlier, and the painful love affair that pushed her to the brink of tragedy.

The past just arrived on Ruby’s doorstep . . .

To uncover the truth about a friend’s disappearance, a fragile young woman must silence the ghosts of her past in this moving debut tale that intertwines mystery, madness, betrayal, love, and literature.

“My past was never more than one thought, one breath, one heartbeat away. And then, on that particular October evening, it literally arrived at my doorstep.”

Twenty-two-year-old Ruby Rousseau is haunted by memories of Tarble, the women’s college she fled from ten months earlier, and the painful love affair that pushed her to the brink of tragedy.

When a suitcase belonging to a former classmate named Beth arrives on her doorstep, Ruby is plunged into a dark mystery. Beth has gone missing, and the suitcase is the only tangible evidence of her whereabouts.

Inside the bag, Ruby discovers a tattered copy of Virginia Woolf’s A Room of One’s Own, the book she believes was a harbinger of her madness. Is someone trying to send her a message—and what does it mean?

The search for answers leads to Tarble. As Ruby digs into Beth’s past, she has no choice but to confront her own—an odyssey that will force her to reexamine her final days at school, including the married professor who broke her heart and the ghosts of illustrious writers, dead by their own hand, who beckoned her to join their tragic circle.

But will finding the truth finally set Ruby free . . . or send her over the edge of sanity?

A former English teacher, Amy Gail Hansen is a freelance writer and journalist living in suburban Chicago. This is her first novel.

“I LOVED IT. That book is the perfect beach read… girls who like dishy romantic thrillers are going to go nuts for it this summer. I myself couldn’t put it down til I was done, like it was a big fat pina colada.”—Meg Cabot, New York Times bestselling author

“That rare thing, a dark mystery that also works on your heart, ‘The Butterfly Sister’ is a beguiling, terrifying story and Amy Gail Hansen a true find.”—Jacquelyn Mitchard, New York Times bestselling author of The Deep End of the Ocean

At the beginning of the novel, Ruby says, “My past was never more than one thought, one breath, one heartbeat away.” Later, Professor Barnard calls the past “nature’s most underestimated ghost.” What role does the past play in the story’s plot and the characters’ motivation? To what extent does a person’s past define who he or she is at any given moment? How does the past dictate the future?

Fathers are almost nonexistent in the story, since both Ruby and Beth’s dads are deceased. Furthermore, Virginia Barnard’s father is portrayed in a negative light. Think about the role a father plays in a child’s life, especially in regards to girls. How could a woman’s relationship with her father impact her relationships with men?

What circumstances could have caused Ruby to fall so quickly and deeply in love with Mark Suter? Do you feel you would have welcomed or resisted his advances?

How does the death of Ruby’s father impact her characterization? Can the loss of a loved one change who we are? Is the effect always bad, or can it be good? Are those changes irreversible?

Ruby’s thesis rests on the assertion that madness and creativity are linked. Reflect on creative people. Is there a connection between the two?

Ruby’s thesis revolves around the Virginia Woolf quote: “A woman must have money and a room of her own if she is to write fiction.” What do you think Woolf meant by this? Do her words still hold weight today?

Just like many intelligent and successful women, Ruby and Beth are seduced by Mark, thus making an essentially poor decision. Discuss how love can open the door for smart women to make stupid choices when it comes to a partner.

After Mark breaks up with Ruby, she tries to take her own life. What part, if any, did he play in her suicide attempt? In your opinion, did she really want to die, or did she just feel like she didn’t want to live? Is there a difference?

Tarble, a fictitious all-female college in the Midwest, serves as the story’s setting. In what ways does this backdrop supplement the novel’s plot and themes? How might the educational experience at an all-girl college differ from a co-ed school? Is there still a need for women’s colleges today?

Feminine depression is a major theme of the story. Is depression the same for both men and women? How might the depression experience be different for a woman versus a man?

At Tarble, Tia Clark and the other student protesters carry signs with the phrase silence is consent. Is being quiet synonymous with approval? When is it best to speak up, and when is it better to say nothing?

Despite what later transpires, Professor Virginia Barnard proves to be an effective mentor for Ruby during her weekend at Tarble. Reflect on your past school experiences. Which teachers made the biggest impact on your academic, social, and emotional growth? How much of a difference can a teacher make on a student, both positively and negatively?

While chatting with Ruby, Professor Barnard says “knowledge is power,” a quote attributed to English philosopher and author Sir Francis Bacon. Is knowledge power? How does what we know impact what we do?

In the cabin, Professor Barnard wants to punish Mark Suter for crimes of the heart. Should he be punished? And if so, how? Do you have any sympathy for him?

The relationships between women— mothers and daughters, sisters, and friends—is a recurring theme of the novel. What role does female bonding play in a woman’s life?