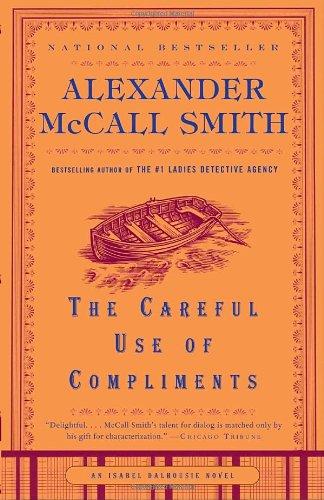 THE CAREFUL USE OF COMPLIMENTS

Full-time philosopher and occasional sleuth Isabel Dalhousie, now the mother of a baby boy, is getting used to the new rhythms of her life, caring for little Charlie with the sometimes unsettling aid of her forthright housekeeper, Grace, having dinners with Charlie’s father, Jamie, and tending as usual to submissions to the Review of Applied Ethics. But Isabel is deeply unsettled when she receives a letter telling her that she is soon to be replaced as editor of the Review by Christopher Dove, an ambitious academic at a London university, and she considers a variety of ways of dealing with this unwelcome news.

Full-time philosopher and occasional sleuth Isabel Dalhousie, now the mother of a baby boy, is getting used to the new rhythms of her life, caring for little Charlie with the sometimes unsettling aid of her forthright housekeeper, Grace, having dinners with Charlie’s father, Jamie, and tending as usual to submissions to the Review of Applied Ethics. But Isabel is deeply unsettled when she receives a letter telling her that she is soon to be replaced as editor of the Review by Christopher Dove, an ambitious academic at a London university, and she considers a variety of ways of dealing with this unwelcome news. And her niece, Cat, who a couple of years before had rejected Jamie and broken his heart, is now furious at Isabel for having stolen him away.

Isabel’s insatiable curiosity—or what Jamie sees as her tendency toward meddling—is peaked when she learns some odd details regarding two paintings by a Scottish artist that have come onto the auction market, and she begins to think that the paintings might be forgeries. Her investigation takes her to the beautiful Isle of Jura, where she finds some recent traces of the painter and learns of his apparent suicide in the fabled whirlpool called the Corryvreckan. A visit to the painter’s widow brings a surprising realization, one that contributes to her musings throughout the story on mothers, fathers, and sons.

Alexander McCall Smith is the author of the international phenomenon The No. 1 Ladies’ Detective Agency series, the Isabel Dalhousie series, the Portuguese Irregular Verbs series, and the 44 Scotland Street series. He is professor emeritus of medical law at the University of Edinburgh in Scotland and has served on many national and international bodies concerned with bioethics.

“Delightful…. McCall Smith’s talent for dialog is matched only by his gift for characterization.” —Chicago Tribune

“Just the right sort of thing to slip into a suitcase for an end-of-summer vacation.”

“Isabel Dalhousie is one of the most irresistible sleuths in modern fiction.” —Tucson Citizen

The novel opens with Isabel and Jamie discussing a philosophical question: out of one hundred people, how many mean well? Isabel is more optimistic about human nature than Jamie is. Is there a character in this story who does not mean well? Whose view of the relative goodness of human nature is more correct—Jamie’s or Isabel’s?

Now that Isabel’s status has changed from that of solitary spinster to that of single mother, she “feels more sensitive to the presence of Grace in the household. In what ways does Grace’s position in Isabel’s life become more complicated now that she helps out with Charlie, and now that Jamie often stays the night?

Just after Jamie’s proposal of marriage, Isabel thinks to herself that the burden of the philosopher was that “one knew what one had to do, but it was so often the opposite of what one really wanted to do”. What she has done is suggested to Jamie that it’s better to wait. Why, if this is not what she wants, does she suggest it? Is she being overly cautious, and if so, why?

At the auction gallery, Jamie asks Isabel, “Just how well-off are you?” She tells him quietly that she has “eleven million pounds. . . . Depending on the value of the dollar”. How might this admission change Jamie’s feelings about his relationship to Isabel and Charlie? Is he right to ask, and is she right to tell him? Why is her money such a sensitive issue?

When in a state of mental conflict, Isabel thinks of Plato’s Phaedrus: “There were two horses in the soul . . . the one, unruly, governed by passions, pulling in the direction of self-indulgence; the other, restrained, dutiful, governed by a sense of shame”. Does it seem true that a person must often choose between these two impulses? Does Isabel’s struggle between the two make the decisions we make in everyday life seem more consequential, more ethical?

A brief conversation with Grace indicates how Isabel worries about her future with Charlie. Grace says, “All boys like their mothers,” to which Isabel answers, “Some mothers suffocate their sons, emotionally.” Isabel’s thoughts about Charlie’s future are affected by her visit to the wife and child of the painter Andrew McInnes, and by her visit to Walter Buie and his mother. What kind of a mother is Isabel likely to be, even if she has to raise Charlie by herself?

Thinking about fictional characters like Madame Bovary and Anna Karenina, Isabel thinks to herself, “She had no author, though. Isabel was real”. Smith has a bit of fun here with the effect of reality he is creating in his fiction; in fact he uses actual Edinburgh streets and auction galleries, actual Scottish painters, and so on, in his stories. What aspects of the Isabel Dalhousie novels make them seem particularly “real”?

Isabel is a person who strives to be perfect in her ethical conduct. Despite the power her inherited wealth might give her, “she would not depart from the code she had set for herself. It was hard, very hard sometimes . . . . Given that she resolves the problem of her position at the Review of Applied Ethics by buying the journal, does she meet her own standard in this regard? In doing so, she maintains control of the journal and her own independence. Is it the perfect solution?

Cat’s jealousy is a serious problem for Isabel. Why is Cat jealous? Is it likely that she really wants Jamie back? Is Cat, as Isabel worries, “fast,”or merely “confused”? Does it seem possible that Jamie would be vulnerable to loving Cat again?

*Spoiler Alert: Do not read past this point unless you want to find out about the mystery.

When she finally meets Andrew McInnes, Isabel tells him of her visit to his wife and son. McInnes believes that the child was fathered by his wife’s ex-lover, but Isabel assures him that the boy looks just like him. Does Isabel do right in speaking to him about such an intimate matter, and to suggest that he has a duty to go and see his wife and son? What motivates her to do so?

When she learns from the intimidating Mrs. Buie that Andrew McInnes is still living, Isabel says, “Disappearing in the first place was rather foolish”. McInnes’s supposed suicide and reappearance under a false identity do seem like very odd behavior. Is it likely that a person would do such a thing? What does he gain by it; what does he lose?

The uncertainty of Isabel and Jamie’s love affair is a source of tension throughout the novel. Isabel, so direct about most things, thinks often about her love for Jamie but doesn’t speak these thoughts to him. What does the final scene, with Isabel’s murmured rhyme about the tattoed man, suggest about possible further developments?