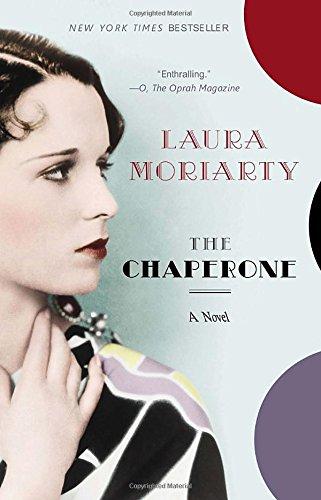 A New York Times bestseller, The Chaperone is a captivating novel about the woman who chaperoned an irreverent Louise Brooks to New York City in the 1920s and the summer that would change them both.

Only a few years before becoming a famous silent-film star and an icon of her generation, a fifteen-year-old Louise Brooks leaves Wichita, Kansas, to study with the prestigious Denishawn School of Dancing in New York. Much to her annoyance, she is accompanied by a thirty-six-year-old chaperone, who is neither mother nor friend. Cora Carlisle, a complicated but traditional woman with her own reasons for making the trip,

A New York Times bestseller, The Chaperone is a captivating novel about the woman who chaperoned an irreverent Louise Brooks to New York City in the 1920s and the summer that would change them both.

Only a few years before becoming a famous silent-film star and an icon of her generation, a fifteen-year-old Louise Brooks leaves Wichita, Kansas, to study with the prestigious Denishawn School of Dancing in New York. Much to her annoyance, she is accompanied by a thirty-six-year-old chaperone, who is neither mother nor friend. Cora Carlisle, a complicated but traditional woman with her own reasons for making the trip, has no idea what she’s in for. Young Louise, already stunningly beautiful and sporting her famous black bob with blunt bangs, is known for her arrogance and her lack of respect for convention. Ultimately, the five weeks they spend together will transform their lives forever.

For Cora, the city holds the promise of discovery that might answer the question at the core of her being, and even as she does her best to watch over Louise in this strange and bustling place she embarks on a mission of her own. And while what she finds isn’t what she anticipated, she is liberated in a way she could not have imagined. Over the course of Cora’s relationship with Louise, her eyes are opened to the promise of the twentieth century and a new understanding of the possibilities for being fully alive.

Drawing on the rich history of the 1920s, ’30s, and beyond—from the orphan trains to Prohibition, flappers, and the onset of the Great Depression to the burgeoning movement for equal rights and new opportunities for women—Laura Moriarty’s The Chaperone illustrates how rapidly everything, from fashion and hemlines to values and attitudes, was changing at this time and what a vast difference it all made for Louise Brooks, Cora Carlisle, and others like them.

Laura Moriarty earned a degree in social work before returning for her M.A. in Creative Writing at the University of Kansas. She was the recipient of the George Bennett Fellowship for Creative Writing at Phillips Exeter Academy in New Hampshire. She lives with her daughter in Lawrence, Kansas.

“The Chaperone is the enthralling story of two women . . . and how their unlikely relationship changed their lives. . . . In this layered and inventive story, Moriarty raises profound questions about family, sexuality, history, and whether it is luck or will—or a sturdy combination of the two—that makes for a wonderful life.”—O, The Oprah Magazine

“In her new novel, The Chaperone, Laura Morirty treats this golden age with an evocative look at the early life of silent-film icon Louise Brooks, who in 1922 leaves Wichita, Kansas, for New York City in the company of 36-year-old chaperone, Cora Carlisle. . . . A mesmerizing take on women in this pivotal era.”—Vogue

“With her shiny black bob and milky skin, Louise Brooks epitomized silent-film glamour. But in Laura Moriarty’s engaging new novel The Chaperone, Brooks is just a hyper-precocious and bratty 15-year-old, and our protagonist, 36-year-old Cora Carlisle, has the not-easy mission of keeping the teenager virtuous while on a trip from their native Kansas to New York City. After a battle of wills, there’s a sudden change of destiny for both women, with surprising and poignant results.”—Entertainment Weekly

“Throughout The Chaperone, her fourth and best novel, Laura Moriarty mines first-rate fiction from the tension between a corrupting coastal media and the ideal of heart-of-America morality. . . . . Brooks’s may be the novel’s marquee name, but the story’s heart is Cora’s. With much sharpness but great empathy, Moriarty lays bare the settled mindset of this stolid, somewhat fearful woman—and the new experiences that shake that mindset up.”—San Francisco Weekly

The Chaperone opens with Cora Carlisle waiting out a rainstorm in a car with a friend when she hears about Louise Brooks for the first time. What do we learn about Cora in this scene? What does it tell us about her and the world she lives in? Why does Laura Moriarty, the author, choose to open the novel this way? Why do you think she waits to introduce us to Brooks?

When we first meet Louise Brooks, she seems to be the complete opposite of Cora, but the two women form an unlikely bond anyway. Are they really so dissimilar? What does Cora learn from Louise? Do you think Louise learns anything from Cora?

When Cora arrives in New York, the city is worlds away from her life in Wichita. How much do you think Cora actually embraces New York? When she returns to Wichita, what does she bring back with her from New York? What parts of her stayed true to Wichita all along?

The limits of acceptable behavior for women were rapidly changing in the 1920s, and both Cora Carlisle and Louise Brooks, in their own ways, push against these boundaries. Discuss the different ways the two women try to change society’s expectations for women. Is one more successful than the other? What are the values involved in each woman’s approach?

Cora becomes frustrated with the hypocrisy of the women in her Wichita circle of friends and yet she herself chooses to keep details about her own life secret. Do you think she should be more open about her life choices? What are the risks for her if she were to be more open?

Cora Carlisle hopes to find the secret of her past in New York City but discovers that the truth doesn’t align with either her expectations or her memory of the past. Why do you think Laura Moriarty has chosen to leave Cora’s history ambiguous? What does this tell you about Cora? How has Cora’s attitude toward her past changed by the end of The Chaperone?

Cora narrates the events of the book from a perspective of many years later. What juxtapositions does this allow her? By placing Cora’s narration at a time of radical social change, what parallels is Moriarty making?

Think about Louise Brooks’s behavior. How much of it would be considered scandalous today? What values has society held on to? In what ways has society changed?