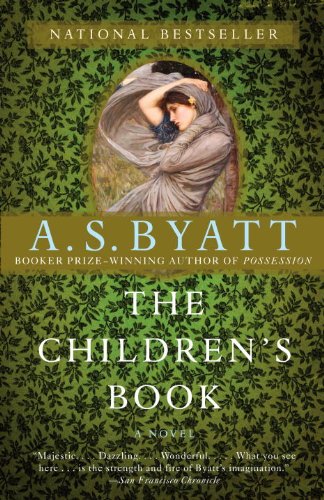 A spellbinding novel, at once sweeping and intimate, from the Booker Prize–winning author of Possession, that spans the Victorian era through the World War I years, and centers around a famous children’s book author and the passions, betrayals, and secrets that tear apart the people she loves.

When Olive Wellwood’s oldest son discovers a runaway named Philip sketching in the basement of the new Victoria and Albert Museum—a talented working-class boy who could be a character out of one of Olive’s magical tales—she takes him into the storybook world of her family and friends.

A spellbinding novel, at once sweeping and intimate, from the Booker Prize–winning author of Possession, that spans the Victorian era through the World War I years, and centers around a famous children’s book author and the passions, betrayals, and secrets that tear apart the people she loves.

When Olive Wellwood’s oldest son discovers a runaway named Philip sketching in the basement of the new Victoria and Albert Museum—a talented working-class boy who could be a character out of one of Olive’s magical tales—she takes him into the storybook world of her family and friends.

But the joyful bacchanals Olive hosts at her rambling country house—and the separate, private books she writes for each of her seven children—conceal more treachery and darkness than Philip has ever imagined. As these lives—of adults and children alike—unfold, lies are revealed, hearts are broken, and the damaging truth about the Wellwoods slowly emerges. But their personal struggles, their hidden desires, will soon be eclipsed by far greater forces, as the tides turn across Europe and a golden era comes to an end.

Taking us from the cliff-lined shores of England to Paris, Munich, and the trenches of the Somme, The Children’s Book is a deeply affecting story of a singular family, played out against the great, rippling tides of the day. It is a masterly literary achievement by one of our most essential writers.

About A S Byatt

A. S. Byatt is the author of numerous novels, including the quartet The Virgin in the Garden, Still Life, Babel Tower, and A Whistling Woman; The Biographer’s Tale; and Possession, which was awarded the Booker Prize. She has also written two novellas, published together as Angels & Insects; five collections of shorter works, including The Matisse Stories and Little Black Book of Stories; and several works of nonfiction. A distinguished critic as well as a novelist, she lives in London.

Shortlisted for the Man Booker Prize

“Easily the best thing A. S. Byatt has written since her Booker-winning masterpiece, Possession . . . A panoramic cavalcade of a novel [and] a work that superlatively displays both enormous reach and tremendous grip.”
—Peter Kemp, The Sunday Times (London)

“Long-listed for the Man Booker Prize, The Children’s Book tells the tale of a Victorian-era children’s book author who takes an artistic runaway into her London home. This act of charity, however, reveals a household that is coming apart at the seams. Byatt takes her characters into World War I, along the way showing how the world both inside and outside their home is disintegrating.”—New York Post

“Byatt returns to the 19th century with The Children’s Book, which centers on English fairy-tale author Olive Wellwood. The novel traces the Wellwoods’ fortunes—and reveals their secrets—as they navigate the tectonic cultural shift from Victorian to modern.”—Time

Why is this novel called The Children’s Book? Discuss the many possible meanings this title suggests.

How are fairy tales important to the novel—both to the story and to the characters themselves? Byatt has said in interviews that fairy tales and the children’s books of the late nineteenth and early twentieth centuries, such as E. Nesbit’s magical stories and The Wind in the Willows, inspired her to write the novel; do you see echoes of any of your favorite children’s stories here?

We follow a huge cast of characters for nearly three decades over the course of the novel; whom did you care about most at the end? Many of the characters are not who they seem; how did your feelings about these characters change as the story developed?

What secrets are the many families in the novel—the Todefright Wellwoods, the Basil Wellwoods, the Cains, the Fludds, and even Elsie and Philip—hiding from each other and from outsiders? Which of the characters’ betrayals did you find most shocking?

From the opening scene, pottery—the craft of it, its history, the contrast between fine art and factory-made pieces—is a recurring presence throughout the novel. Does Olive do the right thing in apprenticing Philip to Benedict Fludd? How does Byatt use the metaphor of clay to enrich the story?

A German puppeteer is a surprise guest at the Wellwoods’ Midsummer party at the beginning of the novel. What role do puppets play in the novel, and what do they represent? How does the relationship between the German and British characters change as the novel unfolds?

What is the significance of the Tree House? What does it mean to Tom—and to his siblings?

Motherhood is a crucial part of the novel, and of Olive’s stories; Olive herself is something of a “Mother Goose,” as in her story “The Shrubbery”. But is Olive a good mother? What about Violet, and the other mothers in the story?

How does the notion of lineage—of knowing who one’s real parents are—affect the children in the novel? Does knowing “the truth” ultimately make much difference to the adults the children grow into—or do the people who actually raise them, and the way they are raised, make more of an impact?

A number of the adult characters are artists in one way or another; many of them—through their art or their actions—cause damage to the other people in their lives. Discuss how the artists in the novel both create and destroy.

Discuss the Fludd family. Why do you think Byatt chose not to divulge the specifics of Benedict’s acts? What do you think he did?

In an essay she wrote for the London Times, Byatt wrote, “There is a strong case to be made that the Edwardians enjoyed school stories, magical tales, and tales of children alone in landscapes—woodland camps, secret expeditions—because they were themselves reluctant to grow up.” How do the adults in the novel reflect this idea? What distinction do the characters make between childhood and adulthood? What distinction is Byatt making through the novel?

Several characters embrace the notion of free love, or of sex outside marriage. What is the result? Is it good for any of them? How do these attitudes resemble, or not, those of the 1960s in the United States?

How is Dorothy—who doesn’t share her mother’s love of stories, who is the serious daughter, and who becomes a doctor—different from her siblings? How does Humphry’s revelation, and his betrayal, change her?

Several characters undergo transformations. Is Charles/Karl’s the most obvious, or the least?

Olive writes stories for each of her seven children, which are bound into their own private books. As the novel unfolds, the story written for her oldest and most beloved son, Tom—”Tom Underground”—becomes more and more important. Why does he cling so tightly to this fairy tale? What does the metaphor of shadow signify? Why does he see the play his mother writes as a betrayal?

Dorothy tells Tom that he’s responsible for Philip’s success. Is this accurate? Why or why not?

What is the significance of the stone with a hole that Tom picks up?

Why does Hedda try to destroy the Gloucester Candlestick? Is it a coincidence that she chose this item? How does the suffragette movement affect her and the other women in the story?

Reread Julian’s poetry. How does it reflect upon the novel itself?

The Children’s Book is a historical panorama that encompasses many political and social movements of the early twentieth century. Were you familiar with the figures and movements Byatt discusses: the Fabian Society, British socialists, women’s rights, etc.? What is your understanding of their purpose in the novel?

The acknowledgments give a glimpse of the research that went into the novel; what subjects did you most enjoy learning about? How does Byatt’s erudition enrich her storytelling?

Reread pages 878–879, the last pages of the novel. Is it a happy ending? What emotions are conjured by this reunion, which takes place in a far different setting than that which opens the novel—and around a bowl of soup?