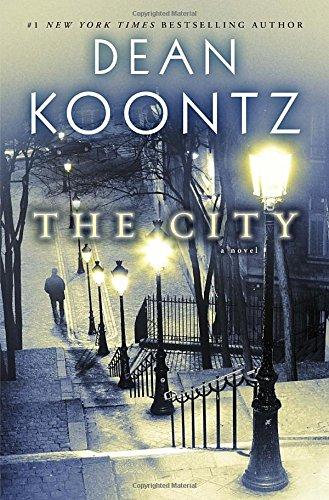 #1 New York Times bestselling author Dean Koontz is at the peak of his acclaimed powers with this major new novel.

Here is the riveting, soul-stirring story of Jonah Kirk, son of an exceptional singer, grandson of a formidable “piano man,” a musical prodigy beginning to explore his own gifts when he crosses a group of extremely dangerous people, with shattering consequences. Set in a more innocent time not so long ago, The City encompasses a lifetime but unfolds over three extraordinary, heart-racing years of tribulation and triumph, in which Jonah first grasps the electrifying power of music and art,

#1 New York Times bestselling author Dean Koontz is at the peak of his acclaimed powers with this major new novel.

Here is the riveting, soul-stirring story of Jonah Kirk, son of an exceptional singer, grandson of a formidable “piano man,” a musical prodigy beginning to explore his own gifts when he crosses a group of extremely dangerous people, with shattering consequences. Set in a more innocent time not so long ago, The City encompasses a lifetime but unfolds over three extraordinary, heart-racing years of tribulation and triumph, in which Jonah first grasps the electrifying power of music and art, of enduring friendship, of everyday heroes.

The unforgettable saga of a young man coming of age within a remarkable family, and a shimmering portrait of the world that shaped him, The City is a novel that speaks to everyone, a dazzling realization of the evergreen dreams we all share. Brilliantly illumined by magic dark and light, it’s a place where enchantment and malice entwine, courage and honor are found in the most unexpected quarters, and the way forward lies buried deep inside the heart.

Dean Koontz, the author of many #1 New York Times bestsellers, lives with his wife, Gerda, and the enduring spirit of their golden retriever, Trixie, in southern California.

“[Koontz] has always had near-Dickensian powers of description, and an ability to yank us from one page to the next that few novelists can match.”—Los Angeles Times

“Koontz is a superb plotter and wordsmith. He chronicles the hopes and fears of our time in broad strokes and fine detail, using popular fiction to explore the human condition.”—USA Today

Jonah recounts his story beginning when he’s eight years old, but in present time, he’s an older man reflecting on and retelling the story of his childhood self. How do you think time and distance have affected Jonah’s retelling of his story? Do you find that the more time you are removed from experiences in your own life, your story—or your view of it—changes? If so, how? What advantages, and challenges, might telling the story from such a perspective bring to an author?

Jonah begins his story asserting: “The last thing I am is a closet pessimist. I’m an optimist and always have been. Life’s given me no reason to expect the worst.” As you read, you learn that Jonah’s life hasn’t exactly been easy and he’s experienced real tragedy. Why do you think he’s such an optimist? Which relationships in his life contribute to that? Do you find that your own difficult life experiences make you more optimistic, or conversely, more pessimistic?

Both Jonah’s grandfather and Mr. Yoshioka serve as father figures to him. How are their ways of relating to him similar? How different? What are the most important lessons and examples that each impart? What scenes best captured these central relationships? Describe Jonah’s relationship with his mother. What makes their relationship so special? What scenes between them did you find most telling? Most affecting? Do you see such a mother-child relationship reflected in other works of literature? In your experience?

Jonah calls his narration an “oral history,” as he’s recording himself “shooting off his mouth.” How do you feel about Jonah as a narrator? Did knowing that his recitation is meant to be more conversational than formal color your relationship with the story in any way? Do you feel more affected by a story told from such an intimate point of view, rather than a story told at a remove, say by an omniscient narrator? How would the story have changed, told from another perspective? Jonah also admits that he plans to edit his recording to “spare the reader all the you-knows and uhs and dead-end sentences, also to make myself sound smarter than I really am.” He says this in jest, but in what ways might we all be guilty of editing our own stories? Consider the way we present ourselves through social media and online profiles. Did this admission make Jonah any less trustworthy as a narrator, considering the things we might leave out of our own narratives? Or did it make him more authentic?

Music is such a powerful, pervasive, magical part of this story, and there’s a scintillating soundtrack in the background, transporting us to another time. How did this contribute to your reading experience? What types of music do you envision might reflect Jonah’s later life? Consider what music means to you. What songs or styles of music might comprise the score for the movie of your life?

Thinking back, Jonah says, “all children are prone to voodoo thinking because they’re essentially powerless and because they lack so much knowledge of how the world works….” Jonah, of course, believes in juju to some extent, deeming his pendant capable of providing the “ultimate protection,” and safeguarding treasured objects in the La Florentine box. Did you have any of your own superstitions as a child? Ones that may seem silly now or that you still cling to in whatever way? Did you have your own “La Florentine box” and if so, what are some of the objects you valued most dearly? How did Jonah’s beliefs play out thematically in the book? Is there a connection between these so-called “childish” beliefs and belief of a deeper nature, as reflected by Miss Pearl?

The “all-seeing eye” is a major theme throughout the novel. There’s the faux eye that must have sprung from a stuffed toy, which Jonah keeps, sensing it has “some ominous significance”; there’s the magazine clipping that Fiona Cassidy contributed to Jonah’s box, having drawn in the eyes with a color that matched her own; and there’s the Fabritius painting, The Goldfinch, the eye of which Jonah feels all of nature peering through, seeing all sides of him and all the lies he’s ever told. In each case, Jonah feels equally unnerved, as though these eyes are portals through which some presence can analyze and judge him. Does he seem to feel the same anxiety when being viewed through each set, or is there an important difference between them? In some ways, do you think he’s attributing his own self-reflection to these “artificial eyes?” Have you ever encountered a set of “eyes” that provoked something in you in the same way? That made you uncomfortable or brought you face-to-face with a truth you wouldn’t have seen otherwise? Can you name similar symbols in other works of literature?

What did you make of the haikus strewn throughout the novel? Were you surprised by how moments of great joy and sorrow are captured so sparingly? How did this help put order and simplicity in Jonah’s world, as he was coming of age during a time of such turmoil? What lessons did they instill? Was there one poem in particular that stood out as especially inspirational or beautiful?

Jonah remarks on the fact that there weren’t many heroes for him to emulate growing up, as most prominent African Americans in pop culture were either sports stars or musicians, never the champions who took down the bad guys, and “taking down bad guys is fundamentally what you want in your model of a hero.” That definition changes for him over time, and the everyday heroes he comes to worship include his mother, his grandfather, Mr. Yoshioka, and Vermeer, to name a few. How do these figures influence the person he becomes, enabling him to persevere in the face of hardships and ultimately inspiring him to maintain his optimism where others might have given up under the circumstances? Do you have your own unsung heroes who’ve inspired you to do the same? In what ways does the influence of such individuals ripple outward, extending beyond their immediate circles to the wider world, in the novel and in reality?

Consider the role of race and identity throughout the narrative, and what it means to different characters. Think about Jonah’s narration as an African American boy coming of age during a time of national unrest, when race riots were the norm. What special insights into the era did you gain from Jonah’s unique perspective? Did anything about his attitude or his family’s attitude about race surprise you? What did you make of Mr. Yoshioka’s Manzanar “posse” and the relationships among them? How did the core values of the various characters inform their approach to this element of their lives?

The question of fate versus free will takes center stage in this novel, with Jonah coming to believe that “There is no fate, only free will.” Consider the instance in which he decided to see for himself who Tilton was eating lunch with at The Royal, and wondered what course his life would have taken if he had followed his instinct to run instead. Have you ever been at a crossroad in your life where events could have gone very differently had you taken the road untraveled? Do you consider the outcome of these instances fate, or like Jonah, do you believe that it was one of the times that you listened to the “small voice” that “wants only what is best for us?” What are other critical moments of decision in the novel? How did you feel about the fates of the various characters? What did you make of Miss Pearl’s special relationship with Jonah and her actions toward him at the end of the novel in terms of the question of destiny?

On the interpretation of art, Amalia says, “when it comes to what it means, no stuffy expert in the world has a right to tell you what you should think about a painting. Art is subjective. What­ever comfort or delight you get from a painting is your business.” Do you agree with this? Do you think there’s a tendency for people to find art intimidating or prohibitive because they’re supposed to take a specific meaning away from it, or arrive at it with some type of context? Is it liberating to embrace this idea that art should stand on its own and that we gravitate toward certain pieces for a reason? Are there works that you’ve found particularly evocative or moving based on your own experience at any given time? Has there been someone in your own life responsible for introducing you to beauty in the same way that Amalia does for Jonah? Do you see the world of art, or music, or architecture, or other forms of artistic expression, any differently because of this story?