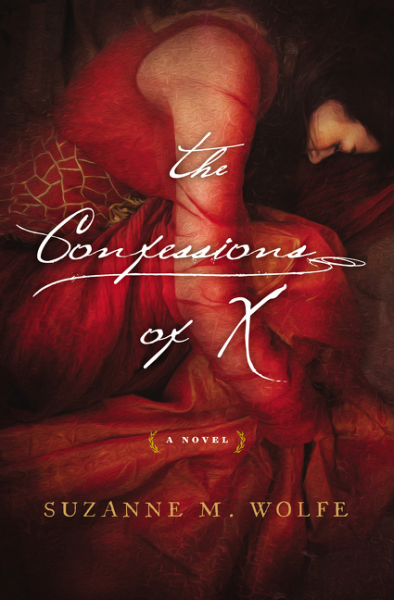 THE CONFESSIONS OF X

Before he became a father of the Christian Church, Augustine of Hippo loved a woman

whose name has been lost to history. This is her story.

She met Augustine in Carthage when she was seventeen. She was the poor daughter of a mosaic-

layer; he was a promising student and with a great career in the Roman Empire ahead of him. His

brilliance and passion intoxicated her, but his social class would be forever beyond her reach.

She became his concubine, and by the time he was forced to leave her,

Before he became a father of the Christian Church, Augustine of Hippo loved a woman

whose name has been lost to history. This is her story.

She met Augustine in Carthage when she was seventeen. She was the poor daughter of a mosaic-

layer; he was a promising student and with a great career in the Roman Empire ahead of him. His

brilliance and passion intoxicated her, but his social class would be forever beyond her reach.

She became his concubine, and by the time he was forced to leave her, she was thirty years old

and the mother of his son. And his Confessions show us that he never forgot her. She was the

only woman he ever loved.

In a society in which classes rarely mingled on equal terms, and an unwed mother could lose her

son to the burgeoning career of her ambitious lover, this anonymous woman was a first-hand

Giving voice to one of history’s most mysterious women, The Confessions of X tells the story of

Augustine of Hippo’s nameless lover, their relationship before his famous conversion, and her

life after his rise to fame. A tale of womanhood, faith, and class at the end of antiquity, The

Confessions of X is more than historical fiction . . . it is a timeless story of love and loss in the

shadow of a theological giant.

A reflection of what it means to love and lose, this novel paints a gripping and raw portrait of

for identity and happiness within very limited circumstances.

University, where she co-founded the Oxford C.S. Lewis Society. She is Writer in Residence at

Seattle Pacific University and has taught literature and creative writing there since 2000. Wolfe

is the author of Unveiling: A Novel (Paraclete Press, 2004) and co-founder, along with her

husband, of Image, a journal of the arts and faith.  Suzanne and Greg have also co-authored

many books on literature and prayer and are the parents of four grown children. They live

“Readers will come to love this daughter of a mosaic layer, who chooses to become the

of Image magazine, which Wolfe helped found, and anyone looking for a stirring tale of love

“Exquisite prose points a poetic biographical sketch of an enigma in early church ancestry. The

“Suzanne Wolfe gives us, in The Confessions of X, the absolutely compelling story of the

mysterious unnamed woman with whom Augustine spent so many formative years of his life.

of love, that between a great man and a great woman, all told in some of the most lyric and

emotionally insightful language I can remember reading. This is a beautiful and worthy book.” –

Bret Lott, author of Jewel and A Song I Knew by Heart

“I hope your whole afternoon is free: you are likely to read this absorbing—truly

engrossing—novel in a single sitting. Because of the captivating prose, and because of the

intimately available characters, you are likely to read it again, a second and third time. And after

you close The Confessions of X, you are likely to pick up Augustine’s Confessions, whether for a

As a woman in the ancient world, X’s options are very limited: not only is she a female and,

thus, without legal status, but she is poor—and not a Roman citizen. Do you think she makes

married Paulinus, the man her aunt chose for her? What would you have done?

Augustine is obviously a restless soul. As he famously said: “Our hearts are restless until they

rest in thee, O, God.” Do you find it believable that the concubine could have loved such a man

given their differences in social status and education? Do you think she shows great courage in

her for her self-sacrifice?

Do you think that X should have been more guarded in her relationship with Monica? Do you

In the ancient world, men and women led much more segregated lives than they do today.

jarring? Do you think the women characters in the novel are diminished because their sphere of

influence is limited to that of the home and family? Do the women in the novel have attributes of

character that may have been lost or forgotten in our contemporary world?

Childbearing and childbirth were the dominant realities for women in the ancient world. Do

and undervalued in our own time?

Does the concubine’s decision to leave her son shock you? Do you think she is a bad

Do you find it believable that X frees her slaves? What would you have done?

One of the recurring themes in the story is the conflict between “flesh” and “spirit.” Augustine

in particular struggles with the nature of the body. Do you think X helps him to change or grow

with regard to these issues?

X states plainly that she neither prays to the Punic gods nor to the Christian God. Her

reasoning is that the Christian God “took too much from me.” Do you consider this a sign of her

integrity or spiritual blindness? When Augustine converts, do you think she should have

followed suit? Do you admire or feel critical of this independence?