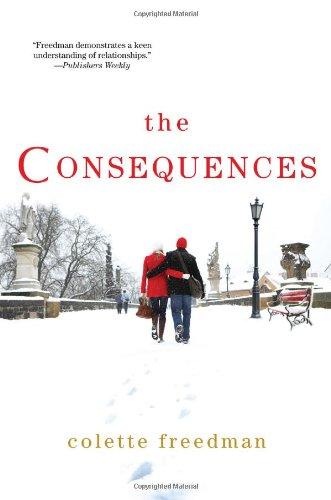 In the riveting follow-up to her acclaimed debut novel, Colette Freedman explores the aftermath of infidelity from three different perspectives–husband, wife, and mistress.

The end of an affair may be only the beginning. . .

Over the course of one tumultuous Christmas Eve, Kathy Walker confirmed her suspicions about her husband’s affair, confronted his mistress, Stephanie, and saved her marriage. She and Robert have eighteen years, two teenagers, and a film production business between them–plus a bond that Kathy has no intention of giving up on. Yet though Robert is contrite, Kathy can’t quite silence her doubts.

In the riveting follow-up to her acclaimed debut novel, Colette Freedman explores the aftermath of infidelity from three different perspectives–husband, wife, and mistress.

The end of an affair may be only the beginning. . .

Over the course of one tumultuous Christmas Eve, Kathy Walker confirmed her suspicions about her husband’s affair, confronted his mistress, Stephanie, and saved her marriage. She and Robert have eighteen years, two teenagers, and a film production business between them–plus a bond that Kathy has no intention of giving up on. Yet though Robert is contrite, Kathy can’t quite silence her doubts.

While Robert reels from his wife’s ultimatum and his mistress’s rejection, Stephanie makes a discovery: she’s pregnant. Her resolve to stay away from Robert wavers now that they could make a real family together. And in the days that follow, Stephanie, Robert, and Kathy must each reckon with the intricate realities of desire, the repercussions of betrayal, and the secrets that, once revealed, ripple through lives and relationships in thoroughly unexpected ways.

Colette Freedman is the author of The Affair and an internationally produced playwright with over 15 produced plays, including Sister Cities, which was the hit of the 2008 Edinburgh Fringe. She has co written, with international bestselling novelist Jackie Collins, the play Jackie Collins Hollywood Lies. In collaboration with the New York Times bestselling author Michael Scott, she has co-written the thriller The Thirteen Hallows.

“Skillfully explores the complex and nuanced landscape of a troubled marriage.”—Kristin Hannah

“An addictive page-turner, as three ordinary people are caught in an extraordinary triangle of love, sex, and commitment.”—Jackie Collins

Stephanie asks herself, “What attracted a thirty-three-year-old,

single, unattached, attractive woman, with her own mortgage

and car, to a man with the ultimate baggage: a wife, two teens,

and a struggling business?” Why do you think she’s attracted

to a man with so many complications? Have you ever been in

her position? What does she see in Robert that makes him so

Stephanie says, “All men lie. But let’s be honest, we wouldn’t

want them to tell us the truth about everything, would we?”

She similarly believes that all women lie as well. When is it

okay to lie to a spouse or partner? Have you ever lied to your

spouse? Can a lie be justified?

As technology changes, so too does the nature of an affair and,

indeed, all relationships. Stephanie checks her e-mail and finds

an urgent message from Robert. She also gets an instant message

from him. How do you think technology has played a role

in affairs? Are relationships stronger or weaker now because

we are almost always connected?

Are you surprised by Stephanie’s coldness when she learns

about Jimmy’s death? Does it make her a bad friend that she

did not immediately console Robert? How would you react if

Should Stephanie tell Robert she is pregnant with his child or

should she keep that information to herself? Why?

Stephanie and Kathy. Yet, do you think the choice is still his to

make? Is it really now the women who are making the decisions

When Kathy confronts Robert, she accepts some responsibility

for what happened. How culpable do you feel Kathy was?

Can you fault her for his affair?

relationship. When trust is broken, how long do you feel it

takes for that trust to be rebuilt? Indeed, is it ever possible for

trust to be rebuilt? Could you trust your partner if he or she

had betrayed you by having an affair?

relationship. Do you think it’s possible? Do you know

any male-female friendships that are completely devoid of sexual

Kathy’s sister Julia immediately rushes to judgment over their

sister Sheila’s affair. Have you ever jumped to a conclusion

about a relationship before hearing both sides of the story?

When the truth about an affair comes out, women usually side

with women and men with men. Have you ever stuck with a

Sheila says, “In an affair, there are no blacks and whites, only

shades of gray.” But is that true? Or is an affair always black

and white and simply wrong? Where are the shades of gray in

Robert and Kathy’s children are present throughout the book

and are a major factor in both Kathy’s and Robert’s thoughts.

We never get to see their side of the story. How perceptive

would teenage children be to a situation like this unfolding

around them? Whose side do you think they would take?

Until Kathy discovers Robert’s ultimate betrayal of lies, she

still has hope that they can rebuild their relationship. Can you

after the betrayal of the affair? Do you agree with her?

At the end of the book, the two women discuss going into

business together. Given that they are very alike in many ways

(Stephanie has acknowledged that she is a younger version of

Kathy), do you think the women would be good business partners?

Statistically, men often have affairs with women who look like

a younger version of their present partners. Women never have

affairs with men who look like their partners. Why is this, and

what does this tell us about the sexes?

Where do you think Robert will be in a year’s time? He is

about to lose his wife and family, his home, and probably his

business. Can he start again or will he end up like Jimmy Moran?

All affairs begin in the mind. But at what point does an affair

begin? Is it with flirtation, a kiss that is more than a peck on