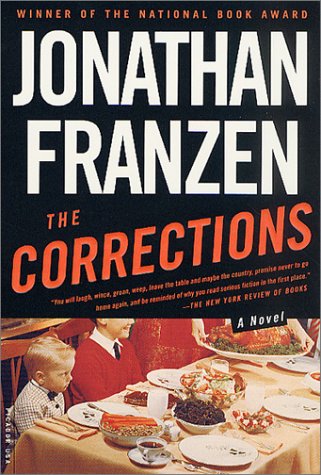 After almost fifty years as a wife and mother, Enid Lambert is ready to have some fun. Unfortunately, her husband, Alfred, is losing his sanity to Parkinson’s disease, and their children have long since flown the family nest to the catastrophes of their own lives. The oldest, Gary, a once-stable portfolio manager and family man, is trying to convince his wife and himself, despite clear signs to the contrary, that he is not clinically depressed. The middle child, Chip, has lost his seemingly secure academic job and is failing spectacularly at his new line of work. And Denise, the youngest,

After almost fifty years as a wife and mother, Enid Lambert is ready to have some fun. Unfortunately, her husband, Alfred, is losing his sanity to Parkinson’s disease, and their children have long since flown the family nest to the catastrophes of their own lives. The oldest, Gary, a once-stable portfolio manager and family man, is trying to convince his wife and himself, despite clear signs to the contrary, that he is not clinically depressed. The middle child, Chip, has lost his seemingly secure academic job and is failing spectacularly at his new line of work. And Denise, the youngest, has escaped a disastrous marriage only to pour her youth and beauty down the drain of an affair with a married man-or so her mother fears. Desperate for some pleasure to look forward to, Enid has set her heart on an elusive goal: bringing her family together for one last Christmas at home.

Jonathan Franzen is the author of The Twenty-Seventh City, Strong Motion, and the essay collection How to Be Alone. He has been named one of the Granta 20 Best Novelists under 40 and is a frequent contributor to The New Yorker and Harper’s. He lives in New York City.

“You will laugh, wince, groan, weep, leave the table and maybe the country, promise never to go home again, and be reminded of why you read serious fiction in the first place.”—The New York Review of Books

“Looms as a model for what ambitious storytelling can still say about modern life . . . Franzen swings for the fences and clears them with yards to spare.”—San Francisco Chronicle

“The novel we’ve been waiting for…a stunning anatomy of family dysfunction…a contemporary novel that will endure.”—Esquire

“This is a spellbinding novel . . . that is both funny and piercing.”
—People

Consider the atmosphere of suburban St. Jude (named for the patron saint of hopeless causes) in comparison to the more sophisticated surroundings of Philadelphia and New York. Why has the Lamberts’ neighborhood evolved into a gerontocratic refuge? “What Gary hated most about the Midwest was how unpampered and unprivileged he felt in it” (p. 178). What negative and positive qualities are attributed to the Midwest? How are the characters shaped by the cities or towns they live in?

What is the significance of “one last Christmas”? Is Enid’s obsession with the holidays predictable for a mother of her generation or is it, as Gary fears, “a symptom of a larger malaise” (p. 148)?

Why does it take so long for the Lamberts to acknowledge the seriousness of Alfred’s illness? Is Al’s deteriorating mental health solely a result of Parkinson’s disease? How are his physical deterioration and mental decline linked? “Irresponsibility and undiscipline were the bane of his existence, and it was another instance of that Devil’s logic that his own untimely affliction should consist of his body’s refusal to obey him” (p. 67). Why are these ailments especially humiliating for Alfred?

Novels written in the nineteenth century often have plots with many characters and story lines. Novels from the 1980s and 1990s often have spare plots with minimalist characters. What is the book’s relation to these two models? Which elements of the book’s style seem especially modern and which more traditional?

What role does corporate America play in this story? Consider the Midland Pacific takeover, Al’s connections with the Axon Corporation, and Brian’s dealings with the W—— Corporation. What are the lessons of Chip’s Consuming Narratives class? Are they accurate and relevant? How should we view Melissa’s critique of them (pp. 42–44)?

What is the source of Gary and Caroline’s marital problems? Whose version of the truth do you believe? Why does Gary feel so alienated from Caleb and Aaron? What draws him to Jonah? Compare this family with the glimpses we have of the young Lamberts. In what ways is Gary different, as a father, from Alfred?

What is your impression of Enid and Alfred’s marriage? Which version of their marriage do you believe—Enid’s image of Al as a pessimistic brooder or Al’s image of Enid as an unrealistic optimist? In what ways do Enid’s capacity for hope and Alfred’s low expectations manifest themselves? How do their temperamental differences play out in the course of the narrative?

“The family was the house’s soul” (p. 269). Analyze the symbolism of the Lambert home in St. Jude. How does its meaning change over the years? Consider Enid’s stockpiles of expired coupons and Al’s catalog of compulsive repairs. Compare this home with the other domestic spaces in the book. How have the Lambert children reacted to the clutter and careful economy of the house they grew up in?

How would you define the members of the Lambert family based on their traits? Which are shared traits and which are specific to an individual? How would these characters describe themselves? If “who a person was was what a person wanted” (p. 539), who are the Lamberts?

Discuss the alliances that formed in the Lambert family after the children left home. What occurrences might account for Denise’s loyalty to Al and for Chip and Gary’s sympathy for Enid? How do these alliances shift during the course of the novel?

Why does Denise choose to lose her virginity to Don Armour? Which qualities of her co-worker simultaneously attract and repel her? Why does Al sacrifice his job for Denise’s privacy?

What is the significance of the title The Corrections? How does the idea of “corrections” play out during the course of the story? What does “What made correction possible also doomed it” (p. 281) mean?

Why is Denise drawn to both Robin and Brian? How attractive are they as characters? How does Denise’s attraction to Robin initially manifest itself? Why is she unable to make a life with Robin?

What is revealed about the dynamics of the young Lambert family during the liver dinner? When Al finds Chip asleep at the dinner table, what upsets him more: concern for his son or disgust with Enid? Do we know the source of Enid’s neglect? “There was something almost tasty and almost sexy in letting the annoying boy be punished by her husband” (p. 263). To what extent are the book’s children shaped by their upbringing, and to what extent is their character predetermined?

How do technology and consumerism infiltrate the lives of the characters? Are cell phones and the spy gad-gets that Caleb craves symptoms of a problem in our society? How does consumerism relate to the problem of what Gary calls anhedonia—”a psychological condition characterized by inability to experience pleasure in normally pleasurable acts” (p. 165)?

What do Chip’s relationships with women reveal about his character? How does his attitude toward women change over the course of the novel? Considering the details of his earlier relationships, does it seem probable that his marriage to Alison Schulman will survive? How did his time in Lithuania prepare Chip to deal with Alfred’s decline and death?

Why does Denise tell Chip not to pay back the money she has lent him? What does the use of the word “forgive” suggest in Denise’s plea to her brother?

How would you describe Franzen’s narrative style? How deeply does he sympathize with his characters? Does the tone of the novel change? Examine the evolution of Enid’s character, from housewife to the liberated woman at the end of the novel who feels that “nothing could kill her hope now” (p. 568). Is there evidence that her liberation is not entirely a good thing?

How does the issue of class play out during the course of the novel? In what different ways does class drive Enid’s behavior on the cruise and propel Denise’s decision to sleep with Don Armour? How does concern over class status affect Gary and Caroline or Brian and Robin?

Is Alfred’s death the key to Enid’s happiness? How does the quality of her life change once Al is hospitalized? What reaction do his children have to his death? Are we meant to believe that their father’s death is the catalyst for their “corrections”? For how much of the unhappiness in the Lambert household was Al responsible?

Are elements of the Lambert family universal characteristics of the American family? How do the world in general and family life in particular change during the half century that the novel spans? In what ways is life better now than when the Lambert children were young? In what ways is it worse?

Which character has undergone the most fundamental change? Is the change positive or negative? Have any of the characters evolved enough for their “corrections” to endure? Are these corrections deliberate, or are they the result of outside occurrences that force the characters to change?

Discuss the different moral codes members of the Lambert family adhere to. Consider Enid’s fear of her children’s “immorality,” Gary’s obsession with Caroline’s dishonesty, Alfred’s refusal to engage in insider trading, Denise’s rage at Gary for having betrayed the sibling code of honor, and Chip’s animus against the W—— Corporation and big business in general. Which of these judgments seem most valid? Does the book favor one moral view over another?

How does America’s long-standing fascination with the notion of progress manifest itself in the story of each character? How does the novel, in its entirety, stand in relation to the American ideas of self-improvement as well as social and technological progress?