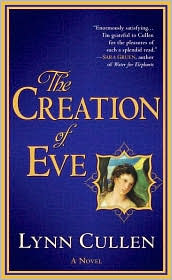 THE CREATION OF EVE

In 1559, a young woman painter flees a scandal involving one of Michelangelo’s students, and is taken to the Spanish court, where she becomes the young queen’s confidante and lady-in-waiting. Through her keenly trained eye, readers watch a love triangle unfold involving the queen, the king, and his half brother-a dangerous gamble that risks the lives of the queen and all those who keep her secrets.

In 1559, a young woman painter flees a scandal involving one of Michelangelo’s students, and is taken to the Spanish court, where she becomes the young queen’s confidante and lady-in-waiting. Through her keenly trained eye, readers watch a love triangle unfold involving the queen, the king, and his half brother-a dangerous gamble that risks the lives of the queen and all those who keep her secrets.

Lynn Cullen is the author of the young adult novel The Creation of Eve, as well as many acclaimed books for children. She lives with her husband in Atlanta, where she is at work on her next novel.

“Cullen richly draws her principal characters and their milieu, effectively transporting the reader back to 16th-century Italy and Spain…. Believable storytelling and wonderfully descriptive writing make The Creation of Eve a must-read for those who love historical fiction, especially if they also love art.”—Newark Star-Ledger

“An intoxicating tale of love, betrayal and redemption. Cullen tackles the contradictions of the Renaissance and captures the dangerous spirit of the Inquisition while handling these vivid characters with prodigious control. The Creation of Eve is a historical romance that teaches as it touches.”—Washington Post

“The Creation of Eve [is a] lavishly detailed, sparkling re-creation. With this suspenseful, evocative tapestry of Renaissance life, art, and royal skullduggery, Lynn Cullen has made a skillful-and, with any luck, permanent-jump into adult fiction.”—Atlanta Journal Constitution

Were you surprised to learn that Sofonisba Anguissola, a Renaissance woman in a male-dominated culture, was a renowned portrait painter? How much of her fame do you think was attributable to her talent, and how much to other factors?

In the novel, we see (to varying degrees) the private lives of a servant, a lady, and a queen. How do their lives differ, and in what ways are their lives defined by their gender or their rank?

How might Sofonisba’s life story have changed if she had married Tiberio Calcagni?

Michelangelo was attracted to men at a time when homosexuality was a crime against the Church, punishable by death. In what ways does Sofonisba’s attitude toward him change over the course of the novel, in part because of what she learns about his personal life, and in part because of the twists and turns of her own fate?

One of the themes in The Creation of Eve is how people make judgments of others and how fallible these judgments can be. The author has stated that she purposely gave her characters both good and bad sides. Did your opinion of any of the characters change over the course of the novel?

Lynn Cullen points out how effectively the Dutch and the English manipulated the historical legacy of Felipe II (as well as their own historical reputations). As a result, slander from the 1500s is still accepted as historical fact. Have you seen examples in your own life in which events as reported on the news differed from a scene you actually witnessed?

When Elisabeth of Valois was growing up in the French court, titillating questions such as “Which is the greater in love, fulfillment or desire?” were debated. Which of those would you champion?

Court intrigue, capable of dooming a queen to death, is a potent force in The Creation of Eve. Certainly, public opinion can affect the lives and careers of public figures today. Are women still more vulnerable than men?

The novel poses the question: How well do we really know those closest to us? Is it sometimes better not to know them too well?

At the end of the book, Sofonisba asks: “Will I ever know why we so often love those whom we cannot possess?” Is what she questions here universal to the human condition?