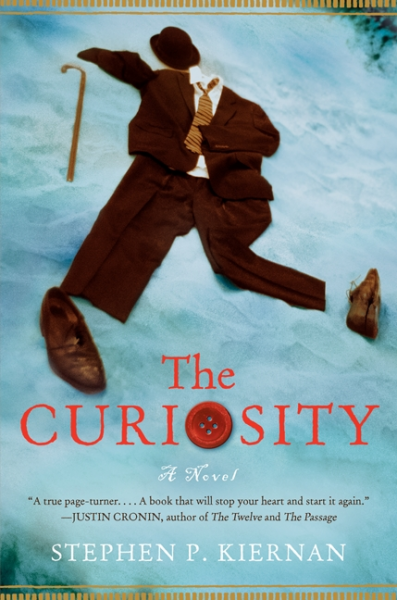 A powerful debut novel in which a man, frozen in the Arctic ice for more than a century, awakens in the present day and finds the greatest discovery is love . . .

Dr. Kate Philo and her scientific exploration team make a breathtaking discovery in the Arctic: the body of a man buried deep in the ice. As a scientist in a groundbreaking project run by the egocentric and paranoid Erastus Carthage, Kate has brought small creatures—plankton, krill, shrimp—back to life for short periods of time. But the team’s methods have never been attempted on larger life-forms.

A powerful debut novel in which a man, frozen in the Arctic ice for more than a century, awakens in the present day and finds the greatest discovery is love . . .

Dr. Kate Philo and her scientific exploration team make a breathtaking discovery in the Arctic: the body of a man buried deep in the ice. As a scientist in a groundbreaking project run by the egocentric and paranoid Erastus Carthage, Kate has brought small creatures—plankton, krill, shrimp—back to life for short periods of time. But the team’s methods have never been attempted on larger life-forms.

Heedless of the potential consequences, Carthage orders that the frozen man be brought back to the lab in Boston and reanimated. The endeavor is named “The Lazarus Project.” As the man begins to regain his memories, the team learns that he was—is—a judge, Jeremiah Rice, and the last thing he remembers is falling overboard into the Arctic Ocean in 1906. When news of the project and Jeremiah Rice breaks, it ignites a media firestorm and protests by religious fundamentalists.

Thrown together by fate, Kate and Jeremiah grow closer. But the clock is ticking and Jeremiah’s new life is slipping away. With Carthage planning to exploit Jeremiah while he can, Kate must decide how far she is willing to go to protect the man she has come to love.

A gripping, poignant, and thoroughly original thriller, Stephen P. Kiernan’s provocative debut novel raises disturbing questions about the very nature of life and humanity—man as a scientific subject, as a tabloid novelty, as a living being: a curiosity.

Stephen P. Kiernan is a journalist and a graduate of Middlebury College, with an M.A. from the Writing Seminars at Johns Hopkins University and an M.F.A. in fiction from the Iowa Writers’ Workshop. He has written two works of nonfiction—Last Rights and Authentic Patriotism—that promote better end-of-life care and civic engagement, and his writing and journalism have been recognized with numerous awards, including the Brechner Center’s Freedom of Information Award, the Scripps Howard Award for Distinguished Service to the First Amendment, and the George Polk Award. He lives in Vermont with his two sons. The Curiosity is his first novel, and film rights have been bought by 20th Century Fox.

“I absolutely loved The Curiosity. It’s as thought-provoking and powerful as Flowers for Algernon and the writing is breathtakingly beautiful. And that ending? Poignant, luminescent, and absolutely perfect.”—Chris Bohjalian, bestselling author of Midwives and The Sandcastle Girls

The book is narrated by four voices: Kate Philo, Jeremiah Rice, Daniel Dixon, and Erastus Carthage. What do these alternating viewpoints bring to the story? What do we learn about each of these characters’ motivations and who they are?

Describe each of the four main characters. Would you call Erastus ethical? What about Kate? Do you think Daniel’s behavior is fairly typical for a journalist? Would the Lazarus Project have been better served with a different media voice? How might they have made it more successful in the eyes of the public?

Think about Kate Why is she a scientist? What rewards does science offer her? Talk about her relationship with her sister. Why does she defy her sister’s challenge for prestige? At the end of the book, is Kate’s choice a step down, or has she finally found the right place for herself? Is she content, or do you think she’s happy? Will she ever find happiness?

Talk about the relationship between Kate and Jeremiah. What attracts them to each other? What do they each learn from the other—about themselves and about life? Do you agree with Kate’s actions? Should she have left Jeremiah in the lab? How might the outcome of the story been different if she had? She and Jeremiah never consummated their love. Should they have? Is love complete without sex?

How does curiosity propel Kate, Erastus, Daniel, and Jeremiah? How much were they driven by curiosity and how much by ambition? Curiosity has led to numerous breakthroughs in human history. Yet can curiosity be a negative influence as well? Explain.

Compare the Lazarus Project experiments with those conducted by the early scientists who helped inspire Mary Shelley’s classic novel, Frankenstein. Early experiments in the study of anatomy—cutting up bodies, and studying them—were considered to be abominable acts. Though we live in the twenty-first century, are we that different in our attitudes to our ancestors?

When he first awakens, what are Jeremiah’s assessments of modern Americans? Is there truth in his observations? Did any of his insights particularly resonate with you? What might he have missed—what would you have shown him or introduced him to? If you have not seen your hometown for a long time, how might you react to visiting it once again?

What does being reborn offer Jeremiah? What is it about Kate that makes him trust her from the moment he is sentient?

Contrast Jeremiah’s life a century ago with his new life today. What have we as a society lost from his time, and what have we gained? Where does the author stand, in your opinion?

Pretend that you are Jeremiah. How would you see the world around you? Describe what you see? Would you be excited? Terrified? Eager to explore and conquer?

How is he treated in the lab? Is he like a zoo animal on display? Why doesn’t Erastus treat him better? Early in the novel, Erastus says that, “once the discovery occurs, science is mostly theater.” Explain how science is “theater.” Do you agree with his thinking?

If it were possible to reanimate life, should we? What are the ethical questions involved in doing so? If you are a religious believer, are these scientists replacing God? Were the protestors justified in their actions? What might Erastus have done to neutralize their influence? A staff physician with the project comments that “what we do today will render the creation myth obsolete.” Is he correct?

The first protestors carry signs that say, “Respect the Dead.” What does it mean to respect the dead? How far should we take this—ban scientific research with corpses? Outlaw cremation?

Carthage believes his project is not only changing our definition of mortality, but that it is “saving humanity.” What is the rational for his thinking? Imagine a world where no one dies. What kind of place would it be? If you could be brought back from the dead would you want to be?

Explain the book’s title. Do you think it is fitting for the story?