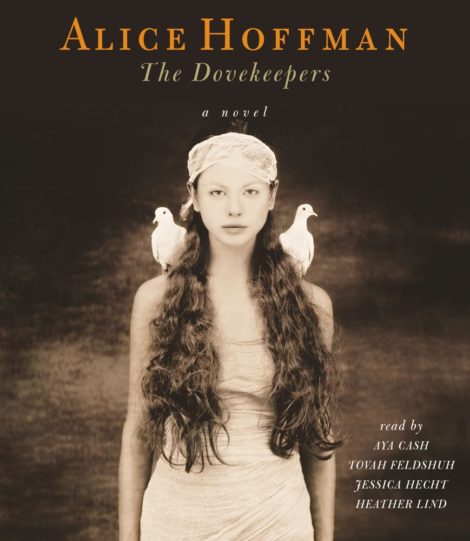 The Dovekeepers is Alice Hoffman’s most ambitious and mesmerizing novel, a tour de force of research and imagination. Nearly two thousand years ago, nine hundred Jews held out for months against armies of Romans on Masada, a mountain in the Judean desert. According to the ancient historian Josephus, two women and five children survived. Based on this tragic and iconic event, Hoffman’s novel is a spellbinding tale of four extraordinarily bold, resourceful, and sensuous women, each of whom has come to Masada by a different path. Yael’s mother died in childbirth, and her father, an expert assassin, never forgave her for that death.

The Dovekeepers is Alice Hoffman’s most ambitious and mesmerizing novel, a tour de force of research and imagination. Nearly two thousand years ago, nine hundred Jews held out for months against armies of Romans on Masada, a mountain in the Judean desert. According to the ancient historian Josephus, two women and five children survived. Based on this tragic and iconic event, Hoffman’s novel is a spellbinding tale of four extraordinarily bold, resourceful, and sensuous women, each of whom has come to Masada by a different path. Yael’s mother died in childbirth, and her father, an expert assassin, never forgave her for that death. Revka, a village baker’s wife, watched the murder of her daughter by Roman soldiers; she brings to Masada her young grandsons, rendered mute by what they have witnessed. Aziza is a warrior’s daughter, raised as a boy, a fearless rider and expert marksman who finds passion with a fellow soldier. Shirah, born in Alexandria, is wise in the ways of ancient magic and medicine, a woman with uncanny insight and power. The lives of these four complex and fiercely independent women intersect in the desperate days of the siege. All are dovekeepers, and all are also keeping secrets—about who they are, where they come from, who fathered them, and whom they love.

Alice Hoffman was born in New York City in 1952 and grew up on Long Island. Hoffman’s first novel, Property Of, was written at the age of twenty-one. She has published a total of twenty-eight works of fiction. Her novel, Here on Earth, was an Oprah Book Club choice. Practical Magic was made into a Warner film starring Sandra Bullock and Nicole Kidman. Hoffman’s work has been published in more than twenty translations and more than one hundred foreign editions. Hoffman is currently a visiting research scholar at the Women’s Studies Research Center at Brandeis University. She lives in Boston.

“I am still reeling from The Dovekeepers—from the history Alice Hoffman illuminates, from the language she uses to bring these women to life. This novel is a testament to the human spirit and to love rising from the ashes of war. But most of all, this novel is one that will never be forgotten by a reader.”—Jodi Picoult, author of Sing You Home

The novel is split into four principal parts, with each of the main characters—Yael, Revka, Aziza, and Shirah—narrating one section. Which of these women did you find most appealing, and why? Were you surprised to find you had compassion for characters who were morally complex and often made choices that later caused guilt and sorrow?

Yael describes her relationship with Ben Simon as “a destroying sort of love” (p. 46). What does she mean by that? Are there other relationships in the novel that could be described in the same way?

From Yael’s setting free the Romans’ lion, to Shirah’s childhood vision of a fish in the Nile, to the women’s care of the doves, animals are an important component in the book. What did animals mean to the people of this ancient Jewish society, and what specific symbolic forms do they take in the novel?

How do spells function in the novel? What is the relationship between Shirah’s Jewish beliefs and her use of magic? If you have read other Alice Hoffman novels that include mystical elements—such as Practical Magic or Fortune’s Daughter—how do they compare to The Dovekeepers and its use of magic?

How do Shirah’s daughters react to the intimate friendship that develops between Yael and their mother? Is Shirah a good mother or not?

What do you make of Channa’s attempt, essentially, to kidnap Yael’s baby Arieh? Is Channa different from the other major female characters in the book? Do you find your opinion of her changes?

“You don’t fight for peace, sister,” Nahara tells Aziza. “You embrace it.” (p. 343) What do you think of Nahara’s decision to join the Essenes? Is she naïve or a true believer? Do you see similarities between the Essenes and the early Christian movement?

Why is the Roman Legion preparing to attack the Jews at Masada? From historical references in the book, as well as your own knowledge of history, explain the roots of the conflict. Do you feel the lives of the women in The Dovekeepers echo the lives of women in the modern world who are experiencing war and political unrest?

Revka’s son-in-law, the warrior known as The Man from the Valley, asks Aziza, “Did you not think this is what the world was like?” (p. 378). Describe the circumstances of this question. After all her training for battle, why is Aziza unprepared for the experience of attacking a village filled with women and children?

In the final pages of the book, Yael sums up those who perished at Masada, remembering them as “men who refused to surrender and women who were ruled by devotion” (p. 478). Do you agree with her description?

For the women at Masada, dreams contain important messages, ghosts meddle in the lives of the living, and spells can remedy a number of human ills. How does their culture’s acceptance of the mystical compare to our culture’s view on such things today? Do mystical and religious elements overlap? How do they compare to your own views?

In the letter below, Hoffman explains that the historical foundation of her story comes from Josephus, the first-century historian who has written the only account of the massacre. How does knowing that the novel is based on history and archeological findings affect your reading of the book?

Women’s knowledge in The Dovekeepers is handed down from mother to daughter, sister to sister, friend to friend. Why do you think it is so difficult to know what the lives of ancient women were really like? Do you see any connection with the way in which your own family stories are handed down through the generations?