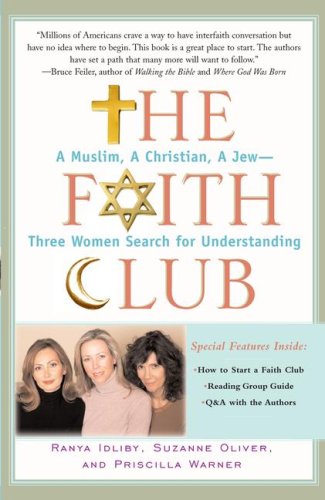 A Muslim, A Christian, A Jew—Three Women Search for Understanding

The Faith Club was started when Ranya Idliby, an American Muslim of Palestinian descent, recruited Suzanne Oliver, a Christian, and Priscilla Warner, a Jew, to write about their three religions. As the women’s meetings began, it became clear that they had their own adult struggles with faith and religion, and they needed a safe haven where they could air their concerns, admit their ignorance, and explore their own faiths.

Ranya, Suzanne, and Priscilla began to meet regularly to discuss their religious backgrounds and beliefs and to ask each other tough questions. As the three women met and talked,

The Faith Club was started when Ranya Idliby, an American Muslim of Palestinian descent, recruited Suzanne Oliver, a Christian, and Priscilla Warner, a Jew, to write about their three religions. As the women’s meetings began, it became clear that they had their own adult struggles with faith and religion, and they needed a safe haven where they could air their concerns, admit their ignorance, and explore their own faiths.

Ranya, Suzanne, and Priscilla began to meet regularly to discuss their religious backgrounds and beliefs and to ask each other tough questions. As the three women met and talked, there were no awkward silences—no stretches of time with nothing for them to say to each other. Honesty was the first rule of the Faith Club, and with that tenet as a foundation, no topic was off limits.

With courage, pain, and sometimes tears, Ranya, Suzanne, and Priscilla found themselves completely transformed by their experience inside the safe cocoon of the Faith Club, and they realized that they had learned things so powerful they wanted to share them with the rest of the world. This is their story.

Ranya Idliby was raised in Dubai and McLean, Virginia. She holds a bachelor of science from Georgetown University’s School of Foreign Service, and earned her MS in international relations from the London School of Economics. She lives in New York City with her husband and two children. Suzanne Oliver was raised in Kansas City, Missouri, and has worked as a writer and editor at Forbes and Financial World magazines. She graduated from Texas Christian University and lives in New York City and Jaffrey Center, New Hampshire, with her husband and three children. Priscilla Warner grew up in Providence, Rhode Island, where she began her interfaith education at a Hebrew day school and then a Quaker high school. A graduate of the University of Pennsylvania, she worked as an art director at various advertising agencies in Boston and New York. She lives with her family in a suburb of New York City.

“More Fight Club than book club, the coauthors pull no punches; their outstanding honesty makes for a page-turning read, rare for a religion nonfiction book…almost every taboo topic is explored on this engaging spiritual ride.” —Publishers Weekly

“Millions of Americans crave a way to have interfaith conversation but have no idea where to begin. This book is a great place to start. The authors have set a path that many more will want to follow.” —Bruce Feiler, author of Walking the Bible and Where God Was Born

How did the book’s format (a three-way memoir written in first person) contribute to the overall feel of the book? At what points did the women write different versions of the same event? (One specific example can be found when Ranya confronts Priscilla about the Israel/Palestinian conflict.) How does each woman’s individual prejudices and religion color her interpretations of the discussions?

How does each woman’s role as a mother influence the direction and tone of the Faith Club? Would the club have been different if it had included mothers as well as women with no children? How did the children play a role in the challenges to each woman’s faith?

To which woman did you most relate, and why? Was it the one you expected when you began the book? If you identified with one of the women because you share her religious beliefs, did you agree with her presentation of your faith? What did you disagree with, and why?

Much of the first half of the book deals with Suzanne’s and Priscilla’s struggles to define anti-Semitism and to confront their prejudices about the other’s faith. Did you feel that Ranya was unfairly relegated to the role of “mediator”, or did she welcome it? “For months, I had to bide my time patiently.” Why do you think Ranya waited to bring up her own struggles with Suzanne’s and Priscilla’s faiths?

Ranya says, “The more that science unravels about the wonders of life and the universe, the more I am in awe of it.” Do you think this combination of science and faith is realistic, or must one ultimately take precedence over the other?

Suzanne’s first sentence speaks of the “cozy, homogeneous community” at her Episcopal church. What is Priscilla’s “comfort zone”? What is Ranya’s? How does each woman step out of her individual, cozy and homogeneous comfort zone, and in what ways does each remain there?

Priscilla wonders if worrying is “a form of gratefulness.” What do you think she means by this? Does Priscilla’s worry ultimately strengthen her faith? How does each woman show gratitude in her life and in her faith?

Craig Townsend tells Suzanne, “The opposite of faith is not doubt, it’s certainty.” What does he mean by this? Is doubt necessary for true faith?

When Priscilla confronts Suzanne about her confession that she was uncomfortable being mistaken for a Jew, Ranya says, “She wouldn’t want to be a Muslim, either.” Do you agree? Why or why not? Is Suzanne’s discomfort an inevitable result of being a member of the majority, of “not [being] forced to accommodate [herself] to the culture, religion, or even friendship of minorities”?

Ranya provides a vivid description of her own method of prayer: “My prayer is essentially a form of meditation in which I singularly apply my limited human physical capacity to try to connect with that omnipresent universal unknown force: God.” (Suzanne’s description of her prayer is on page 162; Priscilla’s is on page 175.) How is each woman’s method of prayer different? How is it similar? How do Suzanne’s, Ranya’s, and Priscilla’s prayer styles reflect the differences and similarities in their childhoods?