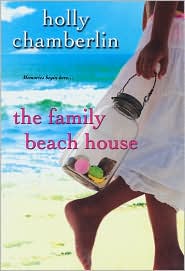 In this poignant, evocative novel, bestselling author Holly Chamberlin sweeps you into the picturesque town of Ogunquit, Maine, where a family in flux explores their ties to a beautiful beach house, and to each other.

Some houses have a personality of their own. Larchmere is that kind of place—a splendid, sprawling home with breathtaking views that open to briny Atlantic air and seabirds’ calls. It’s the place where Tilda McQueen O’Connell grew up and now vacations each year, and where she and her three siblings—Adam, Hannah, and Craig—have gathered to commemorate the tenth anniversary of their mother’s passing.

In this poignant, evocative novel, bestselling author Holly Chamberlin sweeps you into the picturesque town of Ogunquit, Maine, where a family in flux explores their ties to a beautiful beach house, and to each other.

Some houses have a personality of their own. Larchmere is that kind of place—a splendid, sprawling home with breathtaking views that open to briny Atlantic air and seabirds’ calls. It’s the place where Tilda McQueen O’Connell grew up and now vacations each year, and where she and her three siblings—Adam, Hannah, and Craig—have gathered to commemorate the tenth anniversary of their mother’s passing.

But instead of the bittersweet but relaxing reunion Tilda expected, she finds chaos. Her father’s plan to marry a younger woman has thrown the fate of the beach house into uncertainty. For Tilda, the stakes seem the highest. Alone and vulnerable two years after her husband’s death, she sees Larchmere as not just a cherished part of her history, but her eventual refuge from the world. Faced with losing that legacy, Tilda must embrace an unknown future. And all the McQueens must reconcile their shared, sometimes painful past—and learn how to love one another even when it means forging a life apart…

“It does the trick as a beach book and provides a touristy taste of Maine’s seasonal attractions.”—Publishers Weekly

“Readers who enjoy Maine, long passages of description and character introspection should pick up this novel about a family in flux.”—RT Book Reviews

For Bill McQueen’s parents and for himself the salvaging and improving of Larchmere was a labor of love worthy of personal sacrifice. Ruth, while clearly fond of the house, has no interest in inheriting it. Discuss the next generation of McQueens and how they feel about the family home.

Hannah feels that Larchmere itself has a life and a personality, aside from the energies of its inhabitants. Have you ever experienced the sense of a building’s emotional and spiritual power? How might that sense be explained – if, indeed, it can be explained?

Discuss the McQueen siblings’ various concerns about their father’s romantic relationship. Who is being entirely unreasonable and selfish, and who has Bill’s best interests at heart?

Have you witnessed the marginalization or discrimination of a widowed woman, or of a single woman in her middle age? Discuss why in the twenty-first century certain people might still be afraid of or prejudiced against a woman on her own.

Do you think that our increasingly fast paced culture properly respects and allows for the process of mourning?

Tilda argues that one person’s loss cannot and should not be measured against the loss of another. Do you agree?

Tilda feels that with Frank gone, many of her own memories are gone, too. This saddens her but she wonders if “some degree of forgetting was necessary for living in the present and planning for the future.” At one point she also fears that as her memories of Frank fade, so does his legacy, or his presence in the future. Talk about memories of loved ones – burdens or treasures or both? How does nostalgia come to bear?

Though a warm, loving woman, Hannah hesitates to start a family because she fears repeating her mother’s attitude of indifference toward her two younger children. Discuss why Hannah still feels so influenced, even dominated, by a woman who has been dead for ten years.

Hannah sees her mother as primarily concerned with her own self-preservation and has trouble distancing her self from that image. Some, however, might argue that Charlotte’s self-interest was her right as an individual. How much, at the expense of her own well-being and personal fulfillment, does a mother owe her child?

Tilda reflects: “Age and maturity didn’t entirely erase the need for the comfort, the surety of maternal love.” Talk about this in terms of your own experiences.

Kat, Tilda thinks, “is innocent of everything but youth”. What do you think she means by this? Why does Tilda feel less threatened by Kat than by Jennifer? Can you relate to or understand Tilda’s jealousy and fear of Jennifer?

Craig wonders if it’s enough to be a passive and inoffensive person, or if it’s better – even necessary – to be an actively good and productive person. Adam echoes this internal debate when he claims to be someone “who has some real value in the world”, as opposed to his brother. What do you think?

Craig wonders if his fate is “inextricably wound up with the fate” of his family’s home. The thought frightens him; the idea of ‘home’ both appeals to and repulses him. Talk about Craig’s personal struggle in relation to his perception of his place in and value to the family.

Hannah considers Adam a bad parent. Tilda argues that Adam is a loving, if often impatient, parent. With whom do you more agree?

Adam and his father are not at all close. Might Adam’s anti-social behavior be a reaction against what he sees as his father’s indifference to him? Do you think that Adam’s hatred of Bobby might be a disguised jealousy of the men’s relationship? Was there a moment when you felt a bit sorry for Adam?

Do you think Tilda and Hannah were wrong in talking to Kat about her relationship with their brother? If not, why were they justified in their behavior? Were their motives entirely unselfish? Should Tilda have told Adam about Kat’s meeting with another man?

With what character do you most identify? Who is your favorite character? Are they the same?