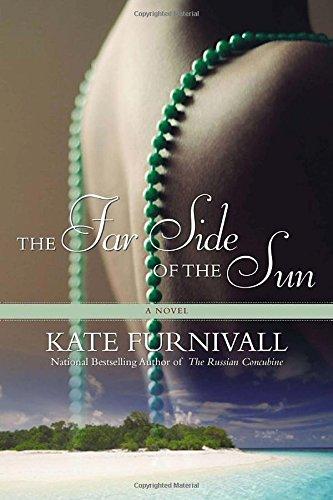 THE FAR SIDE OF THE SUN

The new novel from the author of The Russian Concubine and Shadows on the Nile.

The Bahamas, 1943. Hoping to escape her turbulent past, twenty-three-year-old Dodie Wyatt has fled to Nassau. But the world is at war, and one night the peaceful life she has created for herself is shattered when she discovers a man dying in an alleyway…

Ella Stanford is married to a powerful diplomat who’s been appointed to keep the Duke of Windsor far from his Nazi friends in Germany. And in this city now teeming with danger,

The new novel from the author of The Russian Concubine and Shadows on the Nile.

The Bahamas, 1943. Hoping to escape her turbulent past, twenty-three-year-old Dodie Wyatt has fled to Nassau. But the world is at war, and one night the peaceful life she has created for herself is shattered when she discovers a man dying in an alleyway…

Ella Stanford is married to a powerful diplomat who’s been appointed to keep the Duke of Windsor far from his Nazi friends in Germany. And in this city now teeming with danger, Ella has her own secrets—ones that threaten to tear apart her safe and ordered life…

When Ella’s world collides with Dodie’s, they find themselves caught in the spiral of violence and greed ripping through Nassau. But Dodie falls deeply in love with a mysterious American stranger on the island, and together they fight to uncover the truth behind the bloodshed, while struggling to keep each other alive in this perilous new world…

Kate Furnivall was born in Wales and currently lives in Devon, England. Married and the mother of two sons, she has working in publishing and television advertising. She drew inspiration for The Russian Concubine from her mother’s experiences as a White Russian refugee in China.

“An engrossing read on many levels.”— Publishers Weekly

At the beginning of the novel, Dodie and Ella are presented as complete opposites in character and social status. However, when Flynn is arrested, Ella says to Dodie, “Perhaps I see something in you that’s in myself.” Dodie later wonders if this “something” is a “wildness,” a “glimpse of a storm.” By the end, Ella seems to have embraced this wildness inside her, but Dodie is the one who saves them from the boat. What do you think this says about Ella’s true character? Could she ever be as strong and “wild” as Dodie?

The island presents a unique setting for the story, as it is in both a paradise and an escape, and also in the midst of political turmoil. Further, as a character of sorts, the island is described as a “free spirit” that “flaunted its indifference to any kind of rules.” How does the island, which brings together so many different kinds of people from different backgrounds, echo the various characters? Further, how do you think this environment impacts the behavior of the characters?

Across the island, there is tension between the white people and the black Bahamians. Emerald is an interesting character as she has her foot in both camps: she works for Ella and Reggie and seems to have a respectful bond with them, but she is also a Bahamian. She even takes a jab at Ella when she says, in response to Ella calling her well-fed, “That’s ‘cause us fat black folks will insist on hoggin’ all them dirty low-paid jobs ourselves. Can’t understand it, myself…Can you, Miss Ella?” When push comes to shove, where do you think Emerald’s loyalties truly lie?

Dodie considers herself “unclean” because of her past, but Flynn physically and emotionally cleanses her after she is attacked. Ella on the other hand likes that Dan can see her dirty and muddy after their picnic together. In what ways are these relationships similar and in what ways are they different? Further, what effect does each woman’s romantic relationship have on the friendship between Dodie and Ella?

In Ella’s final scene, she is at the breakfast table with Reggie. Do you think she will ever be happy in her marriage, after her affair with Dan? Do you think she feels any regret for her unfaithfulness?

Throughout the novel, Tilly presents herself as a self-assured, good friend to Ella. But when Dodie speaks with her, she catches a “glimpse of a loneliness that tugged at something in her.” Even at the end, there is some hint of friendship when Tilly comes to visit Ella on the boat to say goodbye. Do you pity Tilly at all? What about Hector, who goes to extreme lengths to protect his wife?

At various points throughout the novel, love is equated with gold, and Hector says that “Everything is always about money…or love.” We are led to believe throughout the novel that the killings are all in pursuit of gold, but that doesn’t turn out to be the case. Do you think the decisions people make out of financial greed are similar to the irrational decisions people make when they are in love?

Throughout the novel, Reggie is described as a good and decent man. At the end of the novel, he seems clearly to have forgiven Ella for her infidelity, even though they don’t speak of it. Do you respect Reggie for this decision? Why or why not?

About Morrell, Dodie thinks “She didn’t want his shoes or clothes or his filthy gold coins, all inanimate leavings, all objects that meant nothing and possessed no trace of him. Of him. Of the man he was under his skin.” Later, Ella says that “As the wife of an MP she would be able to do something positive, influence his policies. She could leave a dent in the world that said Ella Sanford was here.”In the end, how do you think one can accomplish leaving a mark on the world? Do you think that Dodie and Ella have done so by the end of the novel?

When we first see Ella, she is helping Reggie with his cufflinks while wearing an evening gown, seemingly happy with her lifestyle. By the end of the novel, she has thrown herself into an affair with Dan, and has become more outspoken in her search for the truth about what happened to Morrell. Is there one particular moment, or character, in the story that you think first sparks this change in Ella?

As we learn more about Sir Harry Oakes, we find that he had a strong father/son bond with Flynn, and that he was generous with his wealth, but that he was also “a bully.” What is your final impression of Sir Harry?

Dodie calls Morrell a “killer” in front of Flynn, which naturally would extend to Flynn as well. Yet, Dodie has relatively few reservations about Flynn and dives headfirst into a relationship with him. Why do you think she is so trusting of this man?

What purpose does Mama Keel’s character serve in the story? What does her presence say about the island, its culture, and its people?

Why do you think Dodie and Ella are so protective of each other? Is it simply because they are both women, or are there other reasons that they form such a strong bond?

The novel is structured so that chapters are told through the perspective of one character at a time. What purpose does this style of narration serve? How would the novel read differently if it continued to be told through only Dodie’s eyes?