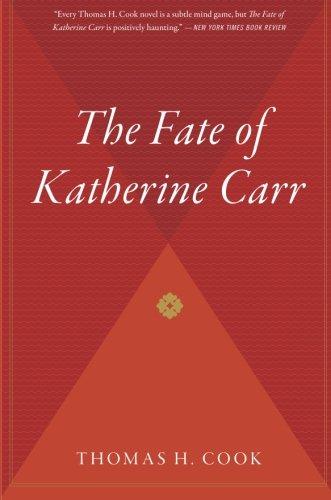 THE FATE OF KATHERINE CARR

George Gates used to be a travel writer who specialized in places where people disappeared—Judge Crater, the Lost Colony. Then his eight-year-old son was murdered, the killer never found, and Gates gave up disappearance. Now he writes for the town paper, stories of redemptive triviality about flower festivals and local celebrities, and spends his evenings haunted by the image of his son’s last day.

Enter Arlo McBride, a retired missing-persons detective still obsessed with the unsolved case of Katherine Carr. When he gives Gates the story she left behind—about a man stalking a woman named Katherine Carr—Gates too is drawn inexorably into a search for the missing author’s brief life and uncertain fate.

George Gates used to be a travel writer who specialized in places where people disappeared—Judge Crater, the Lost Colony. Then his eight-year-old son was murdered, the killer never found, and Gates gave up disappearance. Now he writes for the town paper, stories of redemptive triviality about flower festivals and local celebrities, and spends his evenings haunted by the image of his son’s last day.

Enter Arlo McBride, a retired missing-persons detective still obsessed with the unsolved case of Katherine Carr. When he gives Gates the story she left behind—about a man stalking a woman named Katherine Carr—Gates too is drawn inexorably into a search for the missing author’s brief life and uncertain fate. And as he goes deeper, he begins to suspect that her tale holds the key not only to her fate, but to his own.

Thomas H. Cook was born in 1947 in the Southern town of Fort Payne, Alabama. He received a B.A. at Georgia State College, and graduate degrees from Hunter College and Columbia University. After holding down several jobs as teacher and book reviewer, he began writing full-time. Many of his novels have been nominated for the Edgar and other prestigious awards. Cook is the author of twenty-two novels, including the Edgar-winning The Chatham School Affair. He is married with one daughter, and he and his family divide their time between New York City and Cape Cod.

Throughout the book, George is grieving his son’s death. He has recovered his son’s body, so there’s no hope he’ll be found alive. But hope still remains a potent force in the book: the possibility of hope, the futility of hope, the necessity of hope, the denial of it — the hope for hope itself. On page 21, George says, “fantasy is grief’s nearest companion.” In this passage, George’s fantasy of finding his son’s killer is a hope for justice. Do you agree with his statement about fantasy? Is fantasy the same thing as hope?

Think about the imagery of birds in the book. On page 1, “a hawk circles in the heat”; on page 29, when Arlo tells George about Katherine’s story, a bird takes flight. What are some other examples? Consider the opening line of an Emily Dickinson poem: “Hope is the thing with feathers.” What else could the birds symbolize?

When George goes to meet Alice Barrow, Alice’s nurse says, “People ought to know she was here before she goes” (p. 37). Why does that notion appeal to George? Do you think that people can achieve any kind of immortality through writing — either their own writing or someone else’s writing about them?

Why do you think the author gave Alice the rare disease of progeria? How does Alice’s appearance affect how George sees her? And how the reader sees her?

After reading the first pages of Katherine’s story, George says, “It was a cryptic beginning . . . but not unfamiliar, two men in a bar, engaged in mysterious conversation, the true direction of which would no doubt be revealed in the end” (p. 47). The author plays with the conventions of the mystery novel throughout the book. Can you find other examples of this metatextual commentary on the mystery genre? Do you think The Fate of Katherine Carr conforms to the genre? Is it a typical mystery?

A mysterious woman pops up periodically throughout the novel. She “spoke to no one and . . . no one spoke to her, as if she were visible only to me, a woman created from the shattered remnants of my own unsolved mystery” (p. 56). Having finished the book, do you know who this woman is?

George is fascinated — or haunted — by places that hold sadness, mystery, loss. Do you think that places can be marked by the tragedies that have occurred there? Can you think of places you’ve been to that hold that kind of sadness?

Both Alice and Katherine are outsiders, “freaks,” as the book sometimes refers to them. What do you think makes someone an outcast? Do you see these characters as outcasts?

“Had she been a village freak, I wondered, made one by what an unknown man had done to her?” (p. 70). If everyone knows your story, have you lost control of it? How is our ability to define ourselves, to tell our own story, important? What are the ways that Katherine tries to tell her story? What about Alice, or George? Look at the description of the library on page 71. What does the library imply about the role of storytelling in society?

“We turned onto an unpaved road that wound along a small stream lined with dry reeds. There was no discernible breeze, but they swayed anyway, and a whispery moan rose from them, barely audible, but insistent, like long rows of mourners locked in eternal grief” (p. 79). This description of the reeds as moaning, insistent, is an example of pathetic fallacy, a literary device where inanimate objects are given human emotions or qualities. Are there other examples of pathetic fallacy in the book? Why would the author use it? What are we supposed to learn about the place from the narrator’s description of it? What are we supposed to learn about the narrator?

On page 88, George thinks about why Katherine was writing the story. “What purpose could it serve to imagine a world more hopeful than the real one?” Can you answer that question? Why do you think people write? From another angle, why does the author use this story-within-a-story device? How does it serve the narrative? How does it serve his characters?

“It was nature’s bloody hand that attacked these children, and so in the darkest, deepest sense of things, no one would ever be made to pay for what had been done to them” (p. 108). The book spends a lot of time contemplating the evil things humans do to each other. Yet on more than one occasion the author makes the point that nature itself is dangerous, deadly — possibly even evil. What do you make of these assertions?

George prefers to imagine that Katherine killed herself, “for what end could be better for her than a willful death, carved out in somber sorrow, and with a backdrop of natural beauty?” (p. 119). Why would he prefer this outcome for Katherine? Do you agree? Can a suicide ever be a powerful act?

George dismissively calls Katherine’s ending to her story “supernatural”: “People like to believe crap like that. I went on to describe the weird beliefs of the Buranni, the intervention of the Kuri Lam” (p. 256). What do you think is the role of the supernatural in the book? What do you make of the role the Buranni play at the end of the novel?

In the end, who has George become? Why has he been traveling with Miyawati? Did you think that this frame tale, scant as it was, was effective?