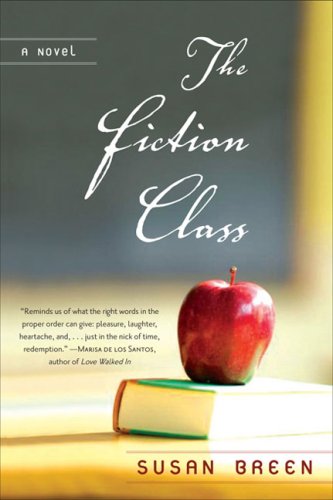 Arabella Hicks helps her students focus on their writing, and she encourages them to nurture the distinctive voice that emerges on paper as a result of that focus. For some of them, it’s the first time any of them have ever had their written work taken seriously.

Unfortunately, it’s becoming increasingly harder for Arabella to practice what she preaches. She’s been writing the same novel for seven years, and lately her time in front of the computer has involved more games of Spider Solitaire than she’d like to admit. Revision consists of considering alternate punctuation. She can’t find an appropriate ending for her novel.

Arabella Hicks helps her students focus on their writing, and she encourages them to nurture the distinctive voice that emerges on paper as a result of that focus. For some of them, it’s the first time any of them have ever had their written work taken seriously.

Unfortunately, it’s becoming increasingly harder for Arabella to practice what she preaches. She’s been writing the same novel for seven years, and lately her time in front of the computer has involved more games of Spider Solitaire than she’d like to admit. Revision consists of considering alternate punctuation. She can’t find an appropriate ending for her novel. Also, she’s distracted. Her mother, ailing from Parkinson’s and living in a nearby nursing home, still has enough energy in her to leave Arabella feeling angry and depleted each time she visits. And these visits, every Wednesday evening after Arabella’s fiction class, are becoming more and more important. As her mother’s health begins to decline rapidly, Arabella must find a way to move their relationship past its previous obstacles and into a place where both women can feel comfortable admitting they need—and love—one another.

Susan Breen’s The Fiction Class is a work of wit and intelligence with a hefty emotional weight, a narrative that teaches us as much about the craft of writing fiction as it does the power of memory, love, and compassion.

Susan Breen teaches fiction classes for Gotham Writers’ Workshop in Manhattan. Her short stories have been published by a number of literary magazines, among them American Literary Review and North Dakota Quarterly. She is also a contributor to The Writer and Writers’ Digest. She lives in Irvington, NY with her husband, children, two dogs and one cat.

“The Fiction Class reminds us of what the right words in the proper order can give: pleasure, laughter, heartache, and, on rare and stunning occasions and just in the nick of time, redemption.” —Marisa de los Santos, author, Love Walked In

In “First Class: Getting Started,” we meet all of the members of Arabella’s ten-week writing course. Who, out of the twelve students, surprised you the most in terms of character development? For those who have taken any kind of community workshop, discuss Breen’s ability to create characters that reflect the types of people who enroll in these classes. How well does she avoid making them stereotypes or clichés?

Discuss and evaluate the structure of the novel. How do Arabella’s class lectures and writing assignments reflect, highlight, or provide insight into her personal life? How do they work as vehicles for flashback and foreshadowing? What keeps the lecture/classroom scenes from becoming formulaic?

Similarly, consider the ways in which Breen uses setting to parallel Arabella’s state of mind and/or reveal meaning. How accurately does she portray the atmosphere of a nursing home? How vividly could you picture the nursery school classroom in which the fiction class takes place?

Arabella isn’t always a sympathetic character. We see her typecasting and criticizing her students rather ruthlessly, and in the beginning of the novel she fails to see how she might be culpable for the rift in her relationship with her mother. What keeps us interested in Arabella as a character? What allows us to keep reading about her until the end of the book?

Discuss how Breen writes about the effects of diseases like multiple sclerosis and Parkinson’s. What does her writing reveal to you about the lives of people with these diseases and the lives of their caretakers?

Is there anything ironic about Chuck’s place as the romantic hero? How does he fit the role, and in what ways does he not? Do you think his relationship with Arabella will last? Does he change much in the novel, or is it simply Arabella’s perspective (of him, and others) that changes?

How did you feel that Arabella could never answer her mother firmly about her own beliefs about God, fortune-tellers, and miracles?

Before Arabella reads her mother’s short story, we see parts of the narrative interspersed between chapters. How, in these early stages, did the story about Joan and her hoped-for miracle work as a parable for what was happening in Arabella and Vera’s life? What did Vera’s story reveal—not only about her relationship with Arabella, but about her perspective before and after her husband’s multiple sclerosis diagnosis?

Like all good literature, The Fiction Class contains symbols that reinforce the theme(s) of the novel. Perhaps the most obvious of these symbols is the perfect apple, which Chuck gives to Arabella early in the semester. Arabella considers various possibilities for the apple as a symbol, but how do you think it works to support the novel’s thematic development? What other symbols did you notice, or consider, when reading the book? What or who did these images and items symbolize?

The Fiction Class is a highly reflexive novel in that it contains or employs many of the devices Arabella talks about in her lectures. Did this make the novel more or less enjoyable to read? Were you conscious of the narrative’s plot development, pacing, character development, dialogue, and thematic development as you read the book? Did you learn anything from Arabella’s lectures? Did her lectures inspire you to try writing on your own?

Do you think that Vera’s vision of her husband (as described in Marvel’s letter) qualified as a miracle? Does it work as a plot device, connecting Vera’s short story with Arabella’s real life experience more solidly, or does it detract from the novel, and make it seem less realistic and genuine? Why do you think unhappy endings—or, at the very least, endings that are neither happy nor sad—are preferred in literary fiction?