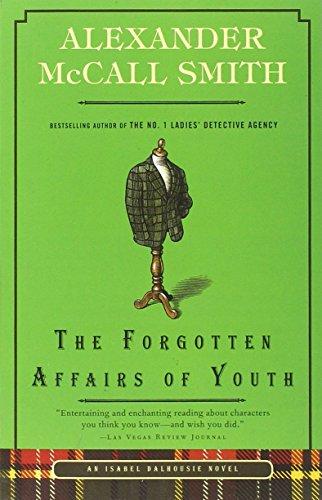 THE FORGOTTEN AFFAIRS OF YOUTH

Isabel and her fiancé know who they are and where they come from. But not everybody is so fortunate. Jane Cooper, a visiting Australian philosopher on sabbatical in Edinburgh, has more questions than answers. Adopted at birth, Jane is trying to find her biological father, but all she knows about him is that he was a student in Edinburgh years ago. When she asks for Isabel’s help in this seemingly impossible search . . . well, of course Isabel obliges.

But Isabel also manages to find time for her own concerns: her young son, Charlie, already walking and talking;

Isabel and her fiancé know who they are and where they come from. But not everybody is so fortunate. Jane Cooper, a visiting Australian philosopher on sabbatical in Edinburgh, has more questions than answers. Adopted at birth, Jane is trying to find her biological father, but all she knows about him is that he was a student in Edinburgh years ago. When she asks for Isabel’s help in this seemingly impossible search . . . well, of course Isabel obliges.

But Isabel also manages to find time for her own concerns: her young son, Charlie, already walking and talking; her housekeeper, Grace, whose spiritualist has lately been doubling as a financial advisor; her niece Cat’s latest relationship; and the pressing question of when and how Isabel and Jamie should finally get married.

Should the forgotten affairs of youth be left in the past, or can the memories help us understand the present? In her inimitable way, Isabel leads us to a new understanding of the meaning of family.

Alexander McCall Smith is the author of the beloved bestselling No. 1 Ladies’ Detective Agency series, the Isabel Dalhousie series, the Portuguese Irregular Verbs series, the 44 Scotland Street series, and the Corduroy Mansions series. He is also the author of numerous children’s books. He is professor emeritus of medical law at the University of Edinburgh and has served with many national and international organizations concerned with bioethics. He was born in what is now known as Zimbabwe and taught law at the University of Botswana. He lives in Scotland.

“No matter the philosophical twist [Isabel] puts on her actions, it comes back to doing the right thing. McCall Smith has produced an endearing, intelligent and kindly character, which leads a reader to imagining him as having similarly charming traits, both human and literary.”—Charleston Post and Courier

“Because both Isabel and Jane are philosophers, discussions on the nature of truth also arise—especially when that elusive creature seems to be antithetical to love. In McCall Smith’s trademark voice, these conflicts play out in civil conversation, delivered in a naturalistic style that conveys both these women’s priorities. . . . Readers get to soak up the cozy atmosphere of this Scottish university town and McCall Smith’s gentle good will. . . . Isabel once again proves herself civilized company for cold winter nights.”—The Boston Globe

“This totally absorbing novel has as its primary focus the grip of the past, as Isabel helps a woman given up for adoption find her biological father. Isabel is everything you’d want in a philosopher, but she is also quirky and witty and made more human by the longing she still sometimes feels for a beautiful but bad love in her past. Far from being Utopian, The Forgotten Affairs of Youth is filled with both spires and spikes, like Edinburgh itself.”—Booklist (starred review)

“You needn’t be a series-long admirer of Isabel Dalhousie to be beguiled by this curious philosopher and casual sleuth . . . Isabel believes only the examined life is worth living, and fearlessly so . . . It makes [her] a heroine worth following, even through this quiet, more reflective foray.”—Publishers Weekly

Spoiler Alert: Do not read further if you want to discover the plot twists on your own. Cat and Isabel talk about whether they find their occupations worthwhile. Isabel admits that she wonders about it all the time, and Cat says that she does not. “I sell cheese and Italian sausages…I don’t have time to think. Most people don’t. They do what they have to do because they need to eat” (24). How does this exchange point to the differences between aunt and niece? What does it suggest about their approaches to life?

Isabel and Jane have an immediate rapport: “Their conversation had started in the deep end, unlike most conversations, which launched themselves into the shallowest of shallows” (38). What experiences and ideas does Isabel share with Jane, although they have just met? Do you agree with Isabel’s statement about the need for a spiritual dimension in one’s life (40-41)?

Though he often feels that Isabel should stay out of other people’s troubles, Jamie feels strongly that she should help Jane find her father. Is Jamie becoming more tolerant, or is there something more than usually poignant about Jane’s situation?

As they lie in bed, Isabel and Jamie discuss Jane’s situation, and Isabel’s mind wanders, as it often does, on various “odd tangents” (45). He says to her, “You think these things—these curious things come into your mind—and then you just say them. I love it. Listening to you is like reading an amazing book” (56). Do you enjoy the digressions of Isabel’s thoughts as much as Jamie does? What does Jamie’s statement tell us about the kind of closeness and affection they share?

In her first conversation with Isabel, Catherine Succoth is guarded, though Isabel guesses at once the nature of her relationship with Alastair Rankeillor (93-101). What is the reason for the different mood of their second conversation? What experience do the two women share (239)?

As Isabel leaves the hospital after being sickened by eating wild mushrooms, she stops and speaks to a young man who has attempted suicide. If you were in his position, how would you feel about Isabel’s words with you (118-19)? Is it intrusive to speak to him, or is it an important act of kindness?

Cat’s new employee, Sinclair, is the sort of person Isabel can’t get along with. What is at the heart of their conflict when they work together in the store (129-135)? What does their interaction, and Isabel’s annoyance with him, tell us about Isabel’s ideals of human behavior?

Recalling a conversation with a friend who commented that in a country village people say good morning to strangers, Isabel thinks, “But we are not moral strangers to those we see in the street” (143). Do you agree with Isabel’s principle of “moral proximity”? How would life be different if most people thought about moral issues as Isabel does?

Visiting Rory Cameron’s village, Isabel passes by some cows poking their head through a gate. “‘I’m sorry, I have nothing for you,’ she muttered.” Then she thinks, “It’s come to this at last: I’m talking to cows”(161). How would you describe Isabel’s sense of humor? In what kinds of situations do you find comedy in this novel?

What is striking about Rory Cameron’s reaction to the news that he is a father? Why is it important for our understanding of the importance of this revelation that he is described as a disappointed man (170-73), a person “with an air of unhappiness about him” (159)?

Do you agree with the way Isabel handles the news that Grace has lost her savings by investing in West of Scotland Turbines (184)? Is she right in compensating Grace for her loss? What does Isabel’s remark, “Carry on being who you are,” tell us about the importance of their relationship (185)?

Isabel believes that Rory is not Jane’s biological father, and that Alastair Rankeillor probably is. Catherine Succoth had suggested that Rory was the person Jane was looking for, but she confirms Isabel’s hunch when they meet again and she apologizes for having been misleading (241). But now that Jane and Rory have struck up such a strong bond, Isabel doesn’t know how to proceed. What is the right thing for Isabel to do in this situation?

In The Careful Use of Compliments, Jamie proposed to Isabel and Isabel suggested that it was better to wait. What happens, or what changes, to convince Isabel that it’s time to marry Jamie? Why do Isabel and Jamie decide to have a very small wedding?

When they next meet, Jane admits that Georgina told her that Rory cannot be her father, because he’s infertile. Georgina hasn’t told him the truth about why they haven’t had children: “she decided to protect him from the psychological burden of the knowledge of his infertility” (251). Given that Rory is a sensitive and disappointed man, are Georgina and Jane right in protecting him from the knowledge that Jane isn’t his daughter?

Is Jane right in arguing that it’s the happiness gained, and not the authenticity of the relationship, that matters (251-54)? Why does Isabel then feel uncomfortable about the outcome?