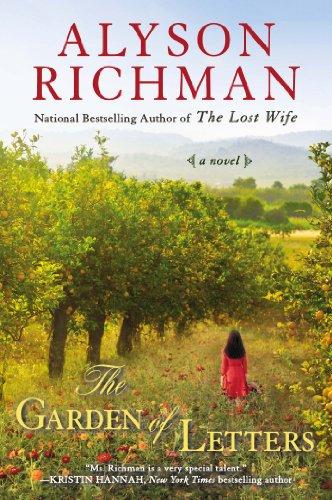 THE GARDEN OF LETTERS

Set against the rich backdrop of World War II Italy, The Garden of Letters captures the hope, suspense, and romance of an uncertain era, in an epic intertwining story of first love, great tragedy, and spectacular bravery.

Portofino, Italy, 1943. A young woman steps off a boat in a scenic coastal village. Although she knows how to disappear in a crowd, Elodie is too terrified to slip by the German officers while carrying her poorly forged identity papers. She is frozen until a man she’s never met before claims to know her. In desperate need of shelter,

Set against the rich backdrop of World War II Italy, The Garden of Letters captures the hope, suspense, and romance of an uncertain era, in an epic intertwining story of first love, great tragedy, and spectacular bravery.

Portofino, Italy, 1943. A young woman steps off a boat in a scenic coastal village. Although she knows how to disappear in a crowd, Elodie is too terrified to slip by the German officers while carrying her poorly forged identity papers. She is frozen until a man she’s never met before claims to know her. In desperate need of shelter, Elodie follows him back to his home on the cliffs of Portofino.

Only months before, Elodie Bertolotti was a cello prodigy in Verona, unconcerned with world events. But when Mussolini’s Fascist regime strikes her family, Elodie is drawn into the burgeoning resistance movement by Luca, a young and impassioned bookseller. As the occupation looms, she discovers that her unique musical talents, and her courage, have the power to save lives.

In Portofino, young doctor Angelo Rosselli gives the frightened and exhausted girl sanctuary. He is a man with painful secrets of his own, haunted by guilt and remorse. But Elodie’s arrival has the power to awaken a sense of hope and joy that Angelo thought was lost to him forever.

Alyson Richman is the national bestselling author of the The Lost Wife, as well as three other critically acclaimed novels: The Mask Carver’s Son, The Rhythm of Memory, and The Last Van Gogh. Her novels are published in more than fifteen languages. She is currently working on a novel about the nineteenth century courtesan, Marthe de Florian, and her Paris apartment that remained untouched for seventy years. Alyson lives in New York with her husband and two children.

“Richman seamlessly weaves together the languages of music and love, reaching into the heart of the reader with artful portraits of heroism, sacrifice and redemption. Fans of  The Lost Wife will again savor Richman’s ability to tell a remarkable story about people who are unforgettable and real.”

“The Garden of Letters demonstrates artistry of the highest order. Lyrical and compelling, Alyson Richman’s novel of a cellist coming of age in wartime Italy is as layered as a symphony. Exquisite.” —Erika Robuck, author of Fallen Beauty

“A brilliant novel that will haunt me for years to come.” —Kristina McMorris, bestselling author of The Pieces We Keep

“Alyson Richman crafts a transportive novel vivid with history and fragile with hope.” —Jessica Brockmole, author of Letters from Skye

The book moves between several time periods, weaving together Angelo’s and Elodie’s pasts, as well as their present together. How does this enrich the storytelling?

A major theme of the novel is how we communicate without words, most notably through the power of music. How else do the characters communicate nonverbally?

How do Elodie’s feelings about music change throughout the book? How does this reflect her shifting worldview?

Elodie’s father tells her that “you sense what’s hidden beneath the music.” How does this foreshadow her work for the resistance movement? How else is foreshadowing used in the novel?

Elodie often says that her extremely precise memory is “the Venetian in me.” Do you think it’s possible to inherit traits from your ethnicity?

Lena seems more alive after attending the resistance meetings, and later on, Elodie observes the same in her mother as she aids in the fighting. Why does this happen?

Do you think that Elodie, on some unconscious level, purposefully leaves the Wolf’s code out of the cadenza during her concert at the Bibiena? Or is she truly lost in the music? How might the events that follow have changed if she had performed the code?

As the Germans enter Verona, average citizens step up to fight: “‘Tell us what to do!’ one of the women shouts. She is not a staffetta, but a matron eager to be useful.” Would you have joined the resistance if you lived in wartime Italy?

The account of the Wolf’s ransacked apartment—“The silk panels were slashed and cut open. The strings of the grand piano had been severed and brutally pulled out like weeds.”—is disturbing, despite its describing only objects. Why? What do you think ultimately became of the Wolf and his wife? Could they have survived?

Why does Angelo gravitate toward things that need extra care? Considering his history with Dalia and Nasai, has he always done so?

Valentina can find beauty and value in items that others see only as trash. What are the parallels between her and Venice itself, a city where “beauty and decay seemed to coexist?”

Why does Dalia paper the room with Angelo’s letters? Why does Angelo leave them intact “like an ancient tomb”? And why does Elodie add to them? What does the “garden of letters” represent to each of them?

The characters often refer to passages from The Little Prince: “It’s only with the heart that one can see rightly; what is essential is invisible to the eye.” What is the significance of these passages? How does it apply to Elodie’s life in Verona, and later on, in Portofino?