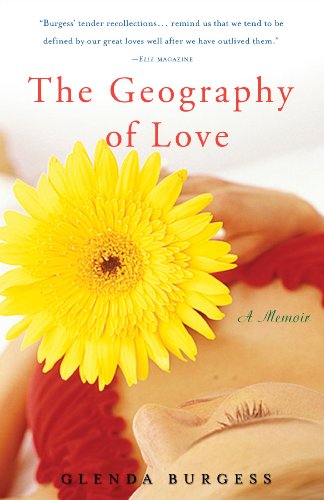 THE GEOGRAPHY OF LOVE

“If I had given it much thought, I might have hesitated to marry a man for whom at the age of 45 much of the past was too painful to consider—for either of us. Truthfully, thought had little to do with it. Instinct did—the instinct to seize a sure and ebullient happiness or go down trying.”

Falling in love is arguably the greatest risk and leap of faith any of us take. There’s no guarantee for future happiness, no protection from the ugly scars of the past, no shield from tragedy—this powerful memoir reminds us why we bother.

“If I had given it much thought, I might have hesitated to marry a man for whom at the age of 45 much of the past was too painful to consider—for either of us. Truthfully, thought had little to do with it. Instinct did—the instinct to seize a sure and ebullient happiness or go down trying.”

Falling in love is arguably the greatest risk and leap of faith any of us take. There’s no guarantee for future happiness, no protection from the ugly scars of the past, no shield from tragedy—this powerful memoir reminds us why we bother.

At a lakeside café in the summer of 1988, 31-year-old Glenda Burgess is sitting across from 44-year-old Kenneth Grunzweig and falling in love. Then Ken confesses that he has already been widowed twice, under harrowing circumstances. This tragic past, the age difference, Ken’s emotionally scarred teenage daughter—all might be enough to send anyone running, but Glenda believed in her instincts, believed more than anything that this lovely, generous man would shape her life. And Ken, who with his heartbreaking losses had long said that he’d given up on love, came to share a sense of their romantic destiny. The two embark on the sort of love affair that many of us don’t believe exist anymore—a grand romance that buoys them through the birth of two kids and fifteen magical years of marriage until tragedy strikes again in the form of a shadowy spot on Ken’s lung. The journey that follows will test their resilience and strengthen their devotion. The Geography of Love is a book about believing in first instincts and second chances.

It is a poignant exploration of the depths of the human heart and our ability to love and to trust no matter the obstacles. It is a reminder that “real” life is always richer, stranger, and more extraordinary than fiction.

Glenda Burgess is the author of two novels, Exposures and Loose Threads. She lives in Spokane, Washington.

“The Geography of Love means than many others can indeed share in [Burgess’s] memories, be inspired by them, reflect on what this one shining marriage teaches about love and happiness, trust and instinct, faith and loss.” —Seattle Post-Intelligencer

“Burgess lyrically and perceptively explores how the body, emotions and experiences are connected, how love and misfortune affect that landscape…Wrenchingly painful, but intensely affecting.” —Kirkus

“Burgess’ tender recollections…remind us all that we tend to be defined by our great loves well after we’ve lived them.” —Elle Magazine

In her memoir’s prologue, Glenda Burgess recalls the child-friendly explanation her father gave for shooting stars: “Just a bit of chance and chaos, Sunshine. Atoms that dance.” How do these images apply to love? Did this description of the universe prove true in her life?

Discuss the memoir’s title. What does it mean to create a geography of love, mapping and describing its features? Where was love “located” for Glenda and Ken, both emotionally and on a map of the world? Which places and people have contributed most to your own geography of love?

What did Glenda’s parents teach her about being a spouse and a parent? How did her father’s downward spiral and her mother’s withdrawal affect her expectations of life?

What accounts for the instincts that helped Glenda know Ken was her soul mate? What is the best way for a couple to know whether they are compatible? Should age differences matter? Besides chronology, how can age be measured in other ways, such as maturity and wisdom, or whimsy and innocence?

In what ways were Glenda and Ken both wounded souls when they met each other? What enabled them to forge such a deep trust? Is intense love always tempered by the equally intense risk of losing someone who means so much?

How did your impressions of Ken evolve throughout Geography of Love? How did the author’s storytelling style create a vivid portrait of herself and of her beloved? Which scenes from your life would best create a portrait of you and those you love?

What turning points were marked when Beckah’s true killer was identified? How had the lives of Ken, Jordan, and Glenda been affected by the shadow of that violent night, and the fact that the crime went unsolved for so many years? What theories had you formed about the murder while reading the memoir’s initial chapters?

What was your first reaction to Ken’s illness and diagnosis, as well as that of Glenda’s mother, Louise? How did their experiences compare to that of other cancer patients you have known about? What did Ken’s and Louise’s stories reveal to you about the wrenching imprecision of treating this disease?

Did Glenda’s siblings have anything in common with Ken’s? What role did extended family play in creating stability as well as instability on both sides? What is the best way to navigate the tensions and the sometimes overwhelming generosity of extended family that often arise in the midst of a severe health crisis?

Were you surprised to hear Louise’s version of events as she recalled her marriage? How did her perception of her past and her life compare to Glenda’s images of growing up? Who “owns” the truth in the re-telling of a life?

Compounding the stress of Ken’s illness was the issue of health-care costs and insurance. As Glenda described the frantic tabulations regarding her husband’s coverage, what thoughts did you have about the economics of healthcare in America?

“I had learned to pray all wrong,” the author writes in “Ever You Fall.” “Real prayer, I understood, functioned in a unity of situation and awareness, a commune between the head and the heart.” How does her experience of spirituality shift throughout the book? What do she and Ken express about spirituality and its relationship to the physical world?

Louise and Ken chose opposing forms of treatment for their cancer, debating these approaches at a diner when they gathered after weeks of estrangement. Which treatment approach would you have favored? What are the limits and benefits of modern medicine?

As his illness progressed, Ken saw the ghost of his first wife, Diana. How did you interpret that scene? What are your beliefs about the process of departing from life, and the potential for interaction with those who have died? What did it mean to Ken to see his first love again after so many years? How had he processed the experience of loving three very different women, at three very different points in his life?

How do the memoir’s closing images echo the words of the poem that forms the book’s epigraph? What did Campbell McGrath’s words signify to you?