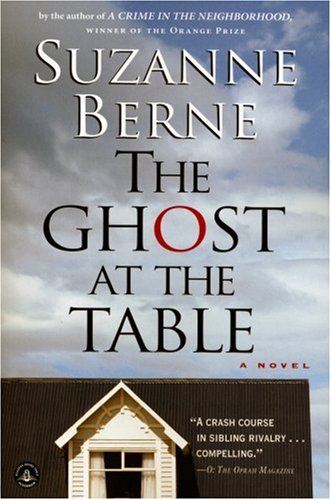 THE GHOST AT THE TABLE

Strikingly different since childhood and leading dissimilar lives now, sisters Frances and Cynthia have managed to remain “devoted”—as long as they stay on opposite coasts. When Frances arranges to host Thanksgiving at her New England farmhouse, she envisions a happy family reunion, one that will include the sisters’ long-estranged father. Cynthia, however, doesn’t understand how Frances can ignore the past their father’s presence revives, a past that includes suspicions about their mother’s death twenty-five years earlier. As Thanksgiving arrives, with a houseful of guests, the sisters continue to struggle with different versions of a shared past, their conflict escalating to a dramatic,

Strikingly different since childhood and leading dissimilar lives now, sisters Frances and Cynthia have managed to remain “devoted”—as long as they stay on opposite coasts. When Frances arranges to host Thanksgiving at her New England farmhouse, she envisions a happy family reunion, one that will include the sisters’ long-estranged father. Cynthia, however, doesn’t understand how Frances can ignore the past their father’s presence revives, a past that includes suspicions about their mother’s death twenty-five years earlier. As Thanksgiving arrives, with a houseful of guests, the sisters continue to struggle with different versions of a shared past, their conflict escalating to a dramatic, suspenseful climax.

Suzanne Berne is the author of two novels, A Crime in the Neighborhood, which won Great Britain’s Orange Prize and was a finalist for both the Los Angeles Times and Edgar Allen Poe first fiction Awards, and A Perfect Arrangement, a New York Times Notable Book.

“Berne’s novel is perfect reading. . . .Perfect if you like compelling characters, acerbic insights and a gimlet-eyed look at the intense bonds between siblings. Berne explores how memory shapes family members in a very different ways. –USAToday

“A witty, moving and psychologically astute story about siblings and the disparate ways they remember common experiences from childhood. . . .Wholly engaging, the perfect spark for launch a rich conversation around your own table once the dishes have been cleared.”
–The Washington Post Book World

In the first few pages, Cynthia freely admits that she and Frances have a strained relationship, though she also says that “of all the people in the world I probably love Frances best” (page 1). Now, however, after many years of refusing Frances’s invitations to come visit during the holidays, Cynthia decides to fly back east for Thanksgiving. What do you think changes her mind? Why is it so important to Frances to have Cynthia come to her house for the holiday?

In addition to Frances’s family, Arlen, Wen-Yi, the Fareeds, and Frances’s assistant, Mary Ellen, come to Frances’s house for Thanksgiving. With such a guest list, Jane goes so far as to call it “Thanksgiving at the UN” (page 30). How have all these outsiders to the family come to the table, and what impact do they have on shaping the events of the evening?

At the Thanksgiving table, Frances’s daughter Sarah proposes that they take turns describing what they are most proud of having done for someone else (pages 207–11). Compare the answers of each sister. Why does Cynthia find Frances’s answer so difficult to hear?

The Ghost at the Table opens with a quotation from The Autobiography of Mark Twain, “a person’s memory has no more sense than his conscience.” How does this statement pertain to each sister? To what degree does it explain Cynthia’s and Frances’s different recollections of the past?

Both Cynthia and Frances have very different views of their childhood. More specifically, they have opposing accounts of what happened to their mother. Whose version is more credible, and why? Discuss the possibility that both sisters’ recollections are accurate.

Frances is an interior decorator; Cynthia writes inspiring history books for girls about domestic life. Why do you think they’ve chosen those professions? How do their jobs provide a comment on who they are or aren’t?

What role do you think Mrs. Jordan plays in the story?

At one point, Cynthia remembers her sister Helen asking their mother what the mother looked like when she was a girl. Instead of listening to her mother’s answer, Cynthia is struck “by an appalling, fascinating thought: What if you looked into the future and didn’t recognize yourself? What if you saw someone else looking back at you instead?” (page 131–32). Do you think Cynthia the child would recognize Cynthia the adult? Would your childhood self be able to identify the adult you’ve become?

In Cynthia’s mind, Frances’s daughters, Sarah and Jane, roughly correspond with Frances and herself when they were younger. Is Cynthia simply projecting? In what ways does the past continue to influence the characters’ perceptions of the present?

Soon after her mother’s death, Cynthia implies that her father played a hand in it. She then goes on to tell Frances that Frances unknowingly helped him (pages 155–57). A few days later, though, she retracts the accusation. Do you think she was being honest or dishonest in either case?

The day after Thanksgiving, Frances insists that she and Cynthia visit Mark Twain’s house in Hartford, with their father in tow. When they discover that the Mark Twain House is closed, they proceed to visit the house they grew up in. What do they find at these houses? What are they hoping to find?

Who, or what, does the ghost of the title refer to, and why?

Who are Sarah and Arlen really discussing when Cynthia overhears them on the baby monitor (page 240)? How do your feelings about Cynthia begin to shift at this point?

When Cynthia wakes up after falling asleep alone in the living room, she sees a pillar candle overflowing with wax. As the organ catches fire, she sits silently watching (page 242). Why, at first, does she do nothing to stop it?

Although Cynthia and Frances’s father is unable to speak, he makes his presence known in the house. Discuss each sister’s behavior towards him and his reaction to both.

What motivates Cynthia to check in on her father when everyone is asleep (pages 287–91)? Do you think she should have called Frances when she discovered he was having trouble breathing? Why didn’t she? In the end, how would you describe what happens between Cynthia and her father?

Cynthia says, “It has been mostly for Jane’s benefit that I have set down this record of what happened over Thanksgiving” so that “my version of those few days in November will stand as an argument for the unreliability of memory” (page 293). How do you think Jane would respond to this record? Although this is Cynthia’s story, did you find yourself identifying with one sister over the other? Who in the story did you have the most empathy for, and why?