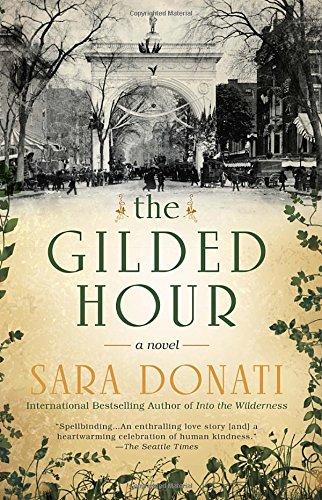 The international bestselling author of Into the Wilderness makes her highly anticipated return with a remarkable epic about two female doctors in nineteenth-century New York.

The year is 1883, and in New York City, Anna Savard and her cousin Sophie—both graduates of the Woman’s Medical School—treat the city’s most vulnerable, even if doing so puts everything they’ve strived for in jeopardy…

Anna’s work has placed her in the path of four children who have lost everything, just as she herself once had.

The international bestselling author of Into the Wilderness makes her highly anticipated return with a remarkable epic about two female doctors in nineteenth-century New York.

The year is 1883, and in New York City, Anna Savard and her cousin Sophie—both graduates of the Woman’s Medical School—treat the city’s most vulnerable, even if doing so puts everything they’ve strived for in jeopardy…

Anna’s work has placed her in the path of four children who have lost everything, just as she herself once had. Faced with their helplessness, Anna must make an unexpected choice between holding on to the pain of her past and letting love into her life.

For Sophie, an obstetrician and the orphaned daughter of free people of color, helping a desperate young mother forces her to grapple with the oath she took as a doctor—and thrusts her and Anna into the orbit of anti-vice crusader Anthony Comstock, a dangerous man who considers himself the enemy of everything indecent and of anyone who dares to defy him.

With its vivid depictions of old New York and its enormously appealing characters, The Gilded Hour is a captivating novel by an author at the height of her powers.

Sara Donati is the pen name of Rosina Lippi, a native of Chicago. She lives with her husband, daughter, and various pets between Bellingham Bay and the Cascade Mountains in the Pacific Northwest.

“Each time you open a book, you hope to discover a story that will make your spirit of adventure and romance sing. This book delivers on that promise.”—Amanda Quick, New York Times bestselling author

From the very first pages of the novel, Sister Mary Augustin’s observations of Dr. Anna Savard give readers a sense of how different Anna is from her contemporaries. Discuss these differences about Anna, with regard to her profession, her dress, and her attitudes. Do these traits make her a sympathetic character, or not?

Anna and Sophie Savard are descendants of Nathaniel Bonner, the patriarch in Sara Donati’s “Into the Wilderness” series. If you have read that series, how do you think the women in The Gilded Hour have evolved from their ancestors? What personality traits do you see have been passed down through the generations, and what is different about the Savard women in 1883? How are Anna and Sophie alike and different?

Although she met many orphans in Hoboken, why is Anna immediately sensitive to Rosa Russo’s situation? How does Rosa’s plight resonate with her? Why does she feel responsible to find Rosa’s brothers?

The setting of New York City plays a major role in the story. What surprised you the most about New York in 1883? How would this story have differed if it was set in the South? A rural town? A European city?

The Gilded Hour frequently juxtaposes the very rich with the very poor, such as when Anna and Cap attend an extravagant costume ball at Alva Vanderbilt’s house, while thousands of orphans spend the night homeless. What other passages, characters, or settings illuminate the class disparities existing in New York at the time?

Sophie identifies as a “free woman of color.” How does this shape and inform her actions and thoughts throughout the story?

Why is Anna drawn to Jack? What makes them a good match, and how does the romance change Anna, if at all?

A theme that works throughout the novel is the rejection of society’s expectations. Discuss how several of the protagonists—Anna, Sophie, Jack, Aunt Quinlan, Cap—exemplify this theme. Are there characters who embrace society’s unspoken rules or stereotypes? How are those characters portrayed?

Sophie agrees to marry Cap despite his deteriorating health condition, and to accompany him to the clinic in Switzerland. How hard is this decision for her? Could you marry someone, knowing they will likely be gone within a year?

Were you surprised by the treatment and attitudes toward women during the 19th century? Discuss the idea of women as the “weaker sex” that permeated society during this time, particularly as portrayed by Archer Campbell and Anthony Comstock. Do you think most women were unhappy during this time?

When discussing the Campbell case with Anna, Aunt Quinlan poses the question “Ubi est morbus?” or “Where is the disease?” What does she mean by this? How would you answer her? How does it help Anna interpret the case?

Why do you think Anna agrees to let Mabel Stone take the four Campbell boys away from their father to Rhode Island, while at the same time remaining conflicted about the adoption of Vittorio Russo in Staten Island? What is the difference between the two cases? Do you believe they did the right thing in either case?

Elise Mercier finds the pressed roses that Anna kept from one of her first conversations with Jack, and realizes that Anna can be both an educated, strong woman, and also sentimental. Why is this duality so surprising to Elise, and what does it say about the importance of love and relationships in these women’s lives?

What evidence do Jack and Oscar have to support their suspicions of Neill Graham? What are your thoughts about him, his family, and his connection to the crimes being investigated?

In the movie version of this story, what actors would you cast to play each role, and why?

When looking at the many social issues highlighted in the novel, including race, class, women’s rights, abortion, crime, immigration, and health care, what idea or argument do you think the author is trying to get across? Compare the issues she presents in 1883 to those same issues in present day. What has changed? What has stayed the same?