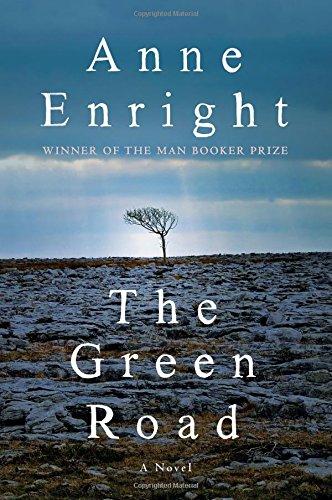 Available now in hardcover and ebook. Coming to

Enright comes a shattering novel set in a small

is a tale of family and fracture, compassion and

selfishness—a book about the gaps in the human

heart and how we strive to fill them.

of the Madigans, a family on the cusp of either coming together or falling

Available now in hardcover and ebook. Coming to

Enright comes a shattering novel set in a small

is a tale of family and fracture, compassion and

selfishness—a book about the gaps in the human

heart and how we strive to fill them.

of the Madigans, a family on the cusp of either coming together or falling

irreparably apart. As they grow up, Rosaleen’s four children leave the west

of Ireland for lives they could have never imagined in Dublin, New York,

and Mali, West Africa. In her early old age their difficult, wonderful mother

announces that she’s decided to sell the house and divide the proceeds. Her

adult children come back for a last Christmas, with the feeling that their

childhoods are being erased, their personal history bought and sold.

the relationships they’ve lost and forge the ones they never had, The Green

Road is Enright’s most mature, accomplished, and unforgettable novel to

Anne Enright was born in Dublin, where she now

lives and works. She has published three volumes of stories, one book of

nonfiction, and five novels. In 2015, she was named the inaugural Laureate

for Irish Fiction. Her novel The Gathering won the Man Booker Prize, and

her last novel, The Forgotten Waltz, won the Andrew Carnegie Medal for

“With language so vibrant it practically has a pulse, Enright makes an

exquisitely drawn case for the possibility of growth, love and transformation

“Enright…is a master of emotional excavation. …Through her wise

and majestic book, [she] shows us the beauty even in life’s harsh terrain.

All of the children move out of Rosaleen’s orbit and

establish their own lives elsewhere. How does their

Rosaleen writes distinct Christmas cards to each of her

children. What does her card to each child tell you about

their relationship? What do the cards tell you about her?

After Dan announces his decision to become a priest, Rosaleen says, “I

What role does dislike play in her relationship with Dan?

Enright writes, “Emmet . . . was drawn to suffering—it was, after all,

his job” (page106). Is his interest in suffering heroic or self-absorbed?

Dan, Hanna, Constance, and Emmet all have aspects of their private

lives that they do not share with one another. What do they hide from

one another, and why?

required” (page 249). From Dan during the AIDS crisis in New York to

Rosaleen on the green road, how are helplessness and love portrayed

as related in the novel?

Toward the end of the novel, Enright describes Rosaleen on the green

road: “there were gaps between things, and this frightened her. This

is where Rosaleen was now. She had fallen into the gap” (page 266).

Pat Madigan is largely absent throughout the narrative. How does his

is compassion. How do members of the Madigan family show

compassion to one another?

Of Rosaleen, Enright writes, “her life was one of great harmlessness”

novel. How have Rosaleen’s children chased, established, or resisted

establishing their own homes?