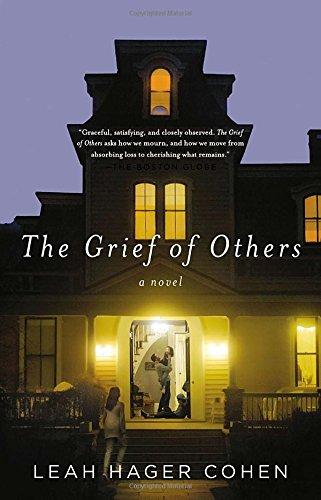 THE GRIEF OF OTHERS

In the tradition of The Memory Keeper’s Daughter, a gripping, generous, and provocative novel chronicling the grief that follows the death of a newborn—and leads to a family’s emotionally reawakening. Unable to express their grief over the loss of their newborn baby, John and Ricky Ryrie struggle to regain a semblance of normalcy for themselves and for their two older children. They pretend not only that little has changed, but that their marriage and their family have always been intact. Yet long suppressed uncertainties about their relationship come roiling to the surface, and a dreadful secret emerges with unexpected reverberations.

In the tradition of The Memory Keeper’s Daughter, a gripping, generous, and provocative novel chronicling the grief that follows the death of a newborn—and leads to a family’s emotionally reawakening. Unable to express their grief over the loss of their newborn baby, John and Ricky Ryrie struggle to regain a semblance of normalcy for themselves and for their two older children. They pretend not only that little has changed, but that their marriage and their family have always been intact. Yet long suppressed uncertainties about their relationship come roiling to the surface, and a dreadful secret emerges with unexpected reverberations.

Moving, psychologically acute, and gorgeously written, The Grief of Others is Leah Hager Cohen at the height of her powers, one that forces readers to ask themselves: what would I have done? The Grief of Others exposed the paradox that facing the unbearable together can awaken us to our better selves and take us from fear to a place of hope.

Leah Hager Cohen is the author of four nonfiction books, including Train Go Sorry and Glass, Paper, Beans, and three novels, most recently House of Lights. Four of her books have been named notable Books of the Year by The New York Times. She is a frequent contributor to The New York Times Book Review and lives in Belmont, MA.

“Leah Hager Cohen is one of our foremost chroniclers of the mundane complexities, nuanced tragedies and unexpected tendernesses of human connection.”—The New York Times Book Review

“Cohen creates gorgeous, uncommon descriptions that sound like grace notes on her pages . . . There’s pain in reading this book, but there’s another thread running through it,

too, gleaming with all the vibrancy of Cohen’s prose: hope.”—The Washington Post

The book’s prologue opens with the physical description of a beautiful newborn baby and his mother’s intimate emotional connection to him, despite what she knows of his fate. What does the author achieve with this opening? Did it make you more invested in the plight of the mother, or the loss of the baby? Did it affect your feelings about the mother later in the book, when you gained a fuller understanding of what led up to this point?

Eventually, it is revealed that Ricky kept something deeply important from her husband. What do you think of her decision? Is it understandable? What are her motivations? How do you think you would have acted in that situation?

When her husband learns the truth about what Ricky has kept from him, he equates it with infidelity. She says, “Please. I kept a secret. I thought it was the right thing. It wasn’t right, but I thought it was. It was hard on me. I didn’t cheat on you. It’s not like an affair.” And he responds, “It’s exactly like an affair…. It’s worse than when you had the affair.” What do you think? How does Ricky’s deceit compare to having an affair? Are they comparable?

In addition to the nuclear Ryrie family, the book also focuses on Jessica, John’s daughter from a previous relationship, and Gordie, a neighbor dealing with the loss of his father. Why do you think these two characters were included? What perspectives do they add for the reader? How do interactions with them affect the Ryries?

The story is also told from the perspectives of the children, Biscuit and Paul. What does this offer to the book as a whole? How do Biscuit and Paul’s experiences of this time period differ from those of their parents? How do the children’s responses differ from one another? How much of this has to do with their respective ages, do you think, and how much is about their personalities? Do you think the children would have suffered less if the parents had behaved differently?

John and Ricky try very hard to be good parents. Why don’t they notice how much their children are suffering? What opens their eyes finally? How do they try to correct their behavior?

Think about times when you yourself have grieved. Which Ryrie did you behave the most like? How did you move past that time of loss?

Part of why the Ryrie family is suffering so deeply is because the loss of baby Simon was so soon after his birth. The author herself says that her inspiration for this book came from her own miscarriage. Think about types of losses that people are encouraged to keep to themselves or “get over.” How does that grief get expressed? Would it be healthier if there were more public acknowledgment of that grief? How can we make a place for that in our lives?

In addition to the main narrative, there are substantial flashbacks in the novel, including the one to the lake vacation. Why do you think the author chose to tell these parts of the story? What perspective do they add? How do they change how you feel at the end?

The Grief of Others opens with the death of baby Simon, but many of the problems facing the Ryrie family existed before his birth. What were they? How were those more every-day issues affected by the sudden traumatic events? Do you think John and Ricky’s marriage would be in a similar place, ultimately, if they had not experienced the loss of the baby and all that followed? Why or why not?

Think about grief itself. We often try to stigmatize it as a dark emotion that should not be indulged. How is grief good for a person? For a family? What is the benefit of sharing?