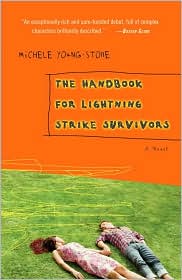 THE HANDBOOK FOR LIGHTNING STRIKE SURVIVORS

When lightning strikes, lives are changed.

On a sunny day in Chapel Hill, North Carolina, eight-year-old Becca Burke was struck by lightning. No one believed her—not her philandering father or her drunk, love-sick mother—not even when her watch kept losing time and a spooky halo of light appeared overhead in photographs. Becca was struck again when she was sixteen. She survived, but over time she would learn that outsmarting lightning was the least of her concerns.

When lightning strikes, lives are changed.

On a sunny day in Chapel Hill, North Carolina, eight-year-old Becca Burke was struck by lightning. No one believed her—not her philandering father or her drunk, love-sick mother—not even when her watch kept losing time and a spooky halo of light appeared overhead in photographs. Becca was struck again when she was sixteen. She survived, but over time she would learn that outsmarting lightning was the least of her concerns.

In rural Arkansas, Buckley R. Pitank’s world seemed plagued by disaster. Ashamed but protective of his obese mother, fearful of his scathing grandmother, and always running from bullies (including his pseudo-evangelical stepfather), he needed a miracle to set him free. At thirteen years old, Buckley witnessed a lightning strike that would change everything.

Now an art student in New York City, Becca Burke is a gifted but tortured painter who strives to recapture the intensity of her lightning-strike memories on canvas. On the night of her first gallery opening, a stranger appears and is captivated by her art. Who is this odd young man with whom she shares a mysterious connection? When Buckley and Becca finally meet, neither is prepared for the charge of emotions—or for the perilous event that will bring them even closer to one another, and to the families they’ve been running from for as long as they can remember.

Crackling with atmosphere and eccentric characters, The Handbook for Lightning Strike Survivors explores the magic of nature and the power of redemption in a novel as beautiful and unpredictable as lightning itself.

Michele Young-Stone earned her MFA in fiction writing from Virginia Commonwealth University. Once, many years ago, she was struck by lightning in her driveway. She survived. Michele resides in Richmond, Virginia with her husband and son and a community of great friends.

“Each character in this startlingly mature debut novel, from Becca’s self-absorbed father and self-destructive mother to Buckley’s evangelical stepdad, is complicated, nuanced, and sympathetic. Young-Stone’s writing style is crystal clear and shot through with lightning-like flashes of description so vivid that readers might think that they are watching a movie. VERDICT: It’s not often that this reviewer regrets a book ending, but that’s what happened here. The sense of melancholy, tempered by the resilience and heart of the characters, makes this ripe for Oprah or fans of Elizabeth Berg or Anne Tyler.” —Library Journal (starred review)

“Young-Stone tells parallel stories that hurdle storm after storm headlong into one another. . . . [She] is a very fine writer who has created a host of endearing losers—young, old, literate, and simple, all full of longing. What she does best is portray the incredulousness of the unlucky.”
—Publishers Weekly

“[N]othing in this novel is predictable, which is one of many reasons that it’s a delight. Young-Stone has written an exceptionally rich and sure-handed debut, full of complex characters, brilliantly described. . . . [H]er style certainly has an electric immediacy.” —Boston Globe

“Luminescent . . . Becca and Buckley’s parallel stories, as well as curiosity about how their paths finally converge, will keep the pages turning, while the complex, colorful characters, and the deep bonds that form between them in spite of and even because of the tragedies they survive, will live on in readers’ minds long after they reach the end of this powerful, beautiful novel.”
—Booklist (starred review)

How important was Becca’s friendship to Carrie? Do you fault Carrie for believing Mike’s story over Becca’s, or did Carrie have just cause to blame Becca?

Did you feel that Mary Burke was an empathetic character? Could you forgive her flaws after learning about her relationship with her own father?

Rowan Burke’s philandering played a significant role in the early part of the novel. How did his behavior later impact Becca’s relationships with men?

What significance did the Book of Job play in the novel? Who might be considered a Job figure and why?

When the author refers to “this god” and “that god,” how are these gods different from Buckley’s understanding of God?

Why do you think certain chapters like St. Patrick’s Day were written in the present tense?  What might be the significance?

Do you think Rowan Burke got what was coming to him? Do you think Becca should give him a second chance? Why or why not?

Mary Wickle Burke thinks, It’s never too late. Do you agree or disagree with this statement? Explain

In what ways does Buckley change while in Galveston? What might be the reasons for these changes?

In what ways does Becca change while in New York? Discuss her transformation from art student to pharmacy clerk.

After going to dinner with her father in New York, Becca goes to Tripp’s apartment and discovers, “…I can’t feel anything.”  What is the significance of being numb?  What do you think she finally comes to understand?

What is the significance of The Thin Man? How did the shooting death of Carmine Damici and Buckley’s subsequent actions change Buckley’s future/destiny?

There are multiple turning points in The Handbook for Lightning Strike Survivors. Discuss how each of the following events affected the character for good or ill.
* Bo’s death
* Claire’s suicide attempt
* Patty-Cake’s appearance at Barnacle Bob’s
* Abigail’s death
* Buckley’s friendship with Mia
* Buckley lying to the police

The relationships between parents and children play major roles in the novel. Discuss the relationships between the two main characters and their parents.  In what ways was Rowan an absent father? Do you think Mary was an absent mother? What about Edna and Winter? Through Mary, Becca and Buckley, the novel expresses that blaming one’s parents won’t solve a person’s problems. Instead, the resentment creates more problems. Discuss this message.  How difficult is it to let go of blame?

Throughout the novel, the narrator occasionally draws attention to herself.  For example, the narrator states:  If you’ve never seen the ocean, board a plane, train, bus or car and go, now, today.  If you’ve seen the ocean and walked a sandy beach or rocky cliff, you’ll be familiar with the ocean’s powers, how it washes things away;…  What do you think about this technique?  What purpose might it serve?

How did The Handbook excerpts contribute to each character’s story and their joint story? Were there any excerpts in particular that resonated with you? Discuss their importance.

If you had to designate one main character for this book, who would it be, Becca or Buckley? Why?

One major theme in the novel is that whether we believe in God or not, we as human beings are connected, having the ability to save one another. The Handbook for Lightning Strike Survivors is an epic novel taking place in multiple locations and spanning decades. How did the book’s epic nature contribute or detract from this particular theme of connectedness?

Another theme is salvation through art. Where throughout the book was this particular theme present? Discuss Colin’s work with the children’s art from Terezin and Anya in relationship to this theme.

Since completing the novel, the author has been “struck” by the number of people, just like her, who have been affected by lightning. Do you know of anyone who’s been a lightning strike victim? Discuss how actual victims’ stories you’re familiar with compare to Becca and Buckley’s experiences.