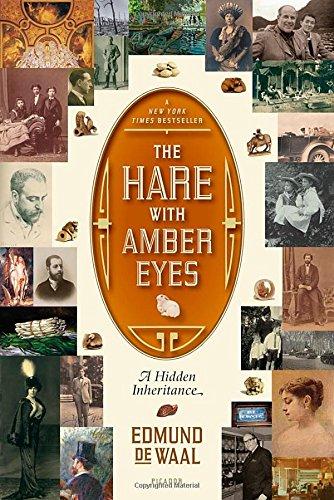 THE HARE WITH AMBER EYES

beautiful pots—which are then sold, collected, and handed on—he has a

particular sense of the secret lives of objects. When he inherited a collection of

who had touched and held them, and how the collection had managed to survive.

and of his family,

beautiful pots—which are then sold, collected, and handed on—he has a

particular sense of the secret lives of objects. When he inherited a collection of

who had touched and held them, and how the collection had managed to survive.

and of his family, the Ephrussis, over five generations. A nineteenth-century banking dynasty in Paris and Vienna, the

Ephrussis were as rich and respected as the Rothchilds. Yet by the end of the World War II, when the netsuke were

hidden from the Nazis in Vienna, this collection of very small carvings was all that remained of their vast empire

Edmund de Waal’s porcelain has been displayed in many museum collections around the world, and he has recently made an installation for the dome of the Victoria and Albert Museum. He was apprenticed as a potter, studied in Japan, and studied English at Cambridge. He is Professor of Ceramics at the University of Westminster and lives in London with his family.

“A family memoir written with a grace and modesty that almost belie the sweep of its contents: Proust, Rilke, Japanese art, the rue de Monceau, Vienna during the Second World War. The most enchanting history lesson imaginable.”— The New Yorker

“An extraordinary history…A wondrous book, as lustrous and exquisitely crafted as the netsuke at its heart.”—The Christian Science Monitor

Charles, like the rest of Paris, became swept up in the fad of “japonisme”, which led to the original purchase of the netsuke. What did these objects represent to their collectors in the Belle Epoque?

In addition to his passion for Durer and the Old Masters and Japanese art, Charles radically embraced the Impressionists. What did he love about that new style? Which of these art spheres seems most quintessentially “Charles”?

Did you develop any new impressions of the major French art figures–Degas, Renoir, Proust–in light of their interaction with Charles?

How did the relationship between collector, patron, and artist evolve from Charles’s Paris to Viktor’s Vienna to Iggie’s Tokyo? Where does Edmund fall in these roles?

The word “insatiability” was used by anti-Semites as a way to propagandize against Jewish families’ material success. Why does this word become such a slur? How might the term apply more positively to collectors of things — and stories?

Why did Charles give away his beloved netsuke to Viktor and Emmy?

Edmund remarks on the coldness and lack of texture in the Palais at Vienna. What do the differences between Charles’s salon in Paris and Viktor’s grand Palais say about the two men?

Do you agree with Edmund’s assessment that the netsuke need not go back to Japan; that their travels and stories have given them an identity of their own?

Are stories more important than objects in a family legacy? How are they related?

The Ephrussi patriarch Charles Joachim had a vision for his family, but it was dependent upon the future generations’ aptitude and willingness. How do the Ephrussi childrens’ responses to their “calling” vary? How does Edmund’s book fit into the Ephrussi legacy?

You’ve likely read many accounts of Nazi raid and Jewish persecution at the start of the occupation, but did anything surprise you or stand out in this account of the takeover of the Palais?

Viktor and Emmy received vague warnings about the coming threats and were encouraged to flee their home. Would you have been able to walk away from such history and treasures without knowing what was ahead?

Viktor essentially sacrificed the Ephrussi dynasty for the sake of his new home country, Austria. Do you think anti-Semetic pressure drove him to become a perfectly loyal citizen, or did Viktor’s allegiance represent his true feeling?

Edmund originally thought that all the Ephrussi “vagabonding” stemmed from a desire to develop culturally and grow from the provincialism of Odessa. But he realized that Odessa itself was a very culturally rich city. Why do you think it was so important for the Ephrussis to send tendrils of their families to different cities?

Why do you think Iggie renounced his American citizenship, a purely symbolic act?