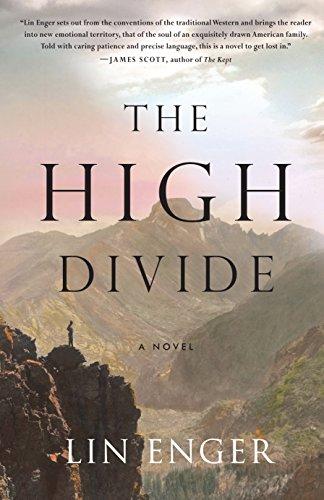 “This remarkable novel deserves to be read more than once. The High Divide proves Enger’s chops as a masterful storyteller.” —Ann Weisgarber, author of The Promise

“The High Divide, a novel about a family in peril, is haunting and tense but leavened by considerable warmth and humanity. Lin Enger writes with durable grace about a man’s quest for redemption and the human capacity for forgiveness.” —Benjamin Percy, author of Red Moon

In 1886, Gretta Pope wakes one morning to discover that her husband is gone.

“This remarkable novel deserves to be read more than once. The High Divide proves Enger’s chops as a masterful storyteller.” —Ann Weisgarber, author of The Promise

“The High Divide, a novel about a family in peril, is haunting and tense but leavened by considerable warmth and humanity. Lin Enger writes with durable grace about a man’s quest for redemption and the human capacity for forgiveness.” —Benjamin Percy, author of Red Moon

In 1886, Gretta Pope wakes one morning to discover that her husband is gone. Ulysses Pope has left his family behind on the far edge of Minnesota’s western prairie with only the briefest of notes and no explanation for why he left or where he’s headed. It doesn’t take long for Gretta’s young sons, Eli and Danny, to set off after him, following the scant clues they can find, jumping trains to get where they need to go, and ending up in the rugged badlands of Montana.

Gretta has no choice but to search for her sons and her husband, leading her to the doorstep of a woman who seems intent on making Ulysses her own. Meanwhile, the boys find that the closer they come to Ulysses’ trail, the greater the perils that confront them, until each is faced with a choice about whom he will defend, and who he will become.

Enger’s breathtaking portrait of the vast plains landscape is matched by the rich expanse of his characters’ emotional terrain, as pivotal historical events—the bloody turmoil of expansionism, the near total demise of the bison herds, and the subjugation of the Plains Indians—blend seamlessly with the intimate story of a family’s sacrifice and devotion.

Lin Enger is an Iowa Workshop graduate, the author of the novel Undiscovered Country, and the recipient of a James Michener Award and a Minnesota State Arts Board Fellowship. His short stories have appeared in Glimmer Train, Ascent, Great River Review, Wolf Head Quarterly, and other journals. He teaches at Minnesota State University Moorhead.

“[A] masterfully told Western reinvention of Homer’s Odyssey . . . set against a backdrop of beauty and danger.” —Publishers Weekly, starred review

“A gripping story . . . Enger is an author worth watching.” —Booklist

“Lin Enger sets out from the conventions of the traditional Western and brings the reader into new emotional territory, that of the soul of an exquisitely drawn, American family. Told with caring patience and precise language, The High Divide is a novel to get lost in.” —James Scott, author of The Kept

Which one of the four members of the Pope family do you see as the novel’s main character? Why?

Why do you think Eli goes off in search of his father instead of staying home to help his mother as she asks him to do?

How does the relationship between Danny and Eli change as the two of them travel west to find their father?

Which, if any, of the novel’s characters seem to have seen through Ulysses’s veneer to the man he really is?

What does Gretta learn about herself in the course of her trials and travels? At what points in the story does she seem most able to tap her own strengths and affect her and her family’s future?

How would you characterize Mrs. Powers? Is she merely opportunistic? Would you consider her admirable in any sense?

After listening to the startling information that Ulysses has come to tell him, why does Magpie allow Ulysses to simply walk away?

Why does Eli sneak away from his father and return to Magpie, Bull Bear, and Leathertop’s camp? In doing so, what does he accomplish?

In what ways does Danny manage to change the course of his family’s history? How might you explain his apparently renewed health at the story’s end?

To what degree does Ulysses finally experience the catharsis he is seeking with his journey to the West and into his past?

In the kitchen Eli peeled and grated three large potatoes into a bowl, added a palmful of mustard seeds, a heavy pinch of dried dandelion, a tablespoon of ground pepper, and just enough water and flour to make a sticky ball. His hands worked on their own, his mind given over to the letter in his pocket, the sweet smell it carried, and the new fears he had now because of it. He was lucky it arrived today, though—he knew that. The regular postman, Smith, was down with a fever, and a man from Moorhead had come out to handle the mail. Smith, of course, would have noted the feminine hand on the envelope and made sure to deliver it in person to their house.

By the time Eli started back to the store, Danny had been tucked into bed, their mother’s, and all the shades had been drawn. The poultice covered his forehead and eyes. Eli took the long way back, stopping to climb the half-dead cottonwood that leaned out over the river, its wide trunk offering a saddlelike seat that Eli leaned back against, trying to calm himself. His heart was beating inside his ears and pulsing in his neck. His hands were weak. He forced himself to take long breaths, and when his heart slowed, he took out his jackknife and sliced open the envelope, careful not to damage the letter inside, which was written in the same hand, though the ink was a different color, not black but a shade of purple that made Eli think of the veins on the tender side of a woman’s wrist. In the upper left-hand-corner was the return address, 1020 5th Avenue North, Bismarck, Dakota, and in the upper right, the date, September 10th, 1886.

I trust this letter finds you healthy and rested from what must have been a difficult journey. It would have meant so very much to Jim that you came, and for me your visit, I hope you know, was a burst of sun in a long gray season.

Eli scanned down the page, registering her mention of a garden—ripening pumpkins and late tomatoes—house painters, a new pastor at church, pleasant weather. Then, toward the bottom of the page, her words caught him up again:

Although I wouldn’t wish upon you or anyone else the loneliness I know, at least I can say now that my heart is capable of human feeling again. Thank you. And if future travels bring you this way, you would be more than welcome. But you know as much already.

For half a minute the interior of Eli’s skull was sparkly and white, like his mother’s kitchen on baking days when the air was full of flour, the sun pouring in through the window. Then his head cleared. Above the river a mallard set its wings, tilted in a fast drop to the water, and skated into the calm pool inside the river’s bend. Eli’s stomach twisted inside him. His parents had always been happy together, hadn’t they—except for that fight over the promissory note? Hadn’t they made a habit of taking walks in the evening, holding hands? Hadn’t he spied them kissing sometimes, early mornings down by the outhouse, or after dark beneath the drooping branches of the old birch? Or was that long ago now? He thought about last winter, not even a year past, when his father managed to offend the entire congregation of Our Savior’s, and soon after, lose most of his carpentry jobs, notably the schoolhouse contract. He remembered, too, watching his father pummel a man at the train depot and lose that job also—justified though he had been. All of this leading to their money problems, and finally his leaving. Something had happened with his father, that was certain, something Eli didn’t understand. Yet he was just as certain—or at least determined to be—that one day everything would be set straight.

But who was this Laura Powers from Bismarck, and how had his father come to know her? Why would he go and visit her? What did she have to do with anything related to their family? And what did that mean: a burst of sun in a long gray season?

Eli supposed the right thing to do was take the letter home and show it to his mother, yet he dismissed the notion out of hand, because he knew this about women, or thought he did—that jealousy could make them incautious and at times irrational. If he showed her the letter, she’d likely decide that Ulysses was lost to her and give up on him and, then when he did come home, would confront him in a way that would drive him off for good.

In the first days of his father’s absence, Eli had decided he was obliged, on behalf of his mother, to go off and find him. Over several weeks he’d put aside from his wages a dollar and a half and hid it in the loft where he and Danny slept, behind a loose board in the wall. The money was still there, more of it now. He checked on it every day, counted it to make sure his brother hadn’t stumbled across it. He’d also squirreled away a loaf of his mother’s bread and half a dozen eggs that he boiled up one day while she weeded the garden. Then late one night in the middle of August—it was the same night the summer’s long pattern of windless days and thick fogs finally broke—he stole outside and sneaked through town to the depot, where he waited behind the water tank for the eastbound night freight. Partly it was the weather—rain, lightning, a terrific wind—and partly the fear of leaving his mother and brother behind, but mostly it was the image of himself in a rattling boxcar, alone and hurtling east toward St. Paul, a city he’d never visited, that made him turn around and walk back home in the driving rain. There was no evidence, after all, beyond his mother’s hunch, that St. Paul was the place to start looking. In fact next time he’d be heading west when he left, not east, his destination certain—at least the