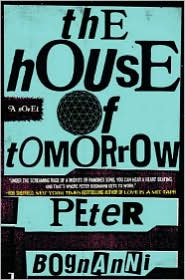 THE HOUSE OF TOMORROW

Sebastian Prendergast lives with his eccentric grandmother in a geodesic dome. His homeschooling has taught him much-but he’s learned little about girls, junk food, or loud, angry music. Then fate casts Sebastian out of the dome, and he finds a different kind of tutor in Jared Whitcomb: a chain-smoking sixteen-year-old heart transplant recipient who teaches him the ways of rebellion. Together they form a punk band and plan to take the local church talent show by storm. But when his grandmother calls him back to the futurist life she has planned for him, he must decide whether to answer the call-or start a future of his own.

Sebastian Prendergast lives with his eccentric grandmother in a geodesic dome. His homeschooling has taught him much-but he’s learned little about girls, junk food, or loud, angry music. Then fate casts Sebastian out of the dome, and he finds a different kind of tutor in Jared Whitcomb: a chain-smoking sixteen-year-old heart transplant recipient who teaches him the ways of rebellion. Together they form a punk band and plan to take the local church talent show by storm. But when his grandmother calls him back to the futurist life she has planned for him, he must decide whether to answer the call-or start a future of his own.

Peter Bognanni is a recent graduate of the Iowa Writers’ Workshop, where he was awarded a Teaching/Writing Fellowship for his work. His short fiction and humor pieces have appeared in Gulf Coast, The Bellingham Review and McSweeney’s Internet Tendency. He is a 2008 Pushcart Nominee, and his short story “The Body Eternal” was chosen by Stephen King as one of the “100 Most Distinguished Stories of 2006” in Best American Short Stories. He is currently a Visiting Instructor of Creative Writing at Macalester College in Saint Paul, Minnesota. He once played in a terrible high school punk band.

“I adore this book, not only for its ability to love our ludicrous hearts, but also for the way it makes dividing questions about whether good literature comes from the heart or the mind seem like nonsense.”—Rivka Galchen, author of Atmospheric Disturbances

“Under the screaming rage of a Misfits or Ramones song, you can hear a heart beating, and that’s where Peter Bognanni gets to work-his wild and tender book reveals how much a couple of scared boys can say to each other with a little hateful noise.”
—Rob Sheffield, author of Love is a Mix Tape

“A geodesic dome in Iowa: The House of Tomorrow, as its title and premise promise, marries the visionary with the everyday, the whizbang with the domestic, and does it with beauty, humor, and love for each one of its flawed characters. Peter Bognanni remembers all the romance and awkwardness of teen life and teen music. His first novel is headlong, hilarious, heartbreaking.”
—Elizabeth McCracken

Do you think Nana is brainwashed with Fuller’s idealist lifestyle, or does she really believe it? Why do you think she finds it better to keep Sebastian sequestered at the dome than allow him to interact with the outside world regularly?

Discuss how Fuller’s hypothesis about living in chapter 3, where he states “we have to figure it all out by ourselves and that is some incredibly grueling work.” Do you believe this foreshadows what happens with Sebastian when he must forge out on his own?

Nana tells Sebastian that his path is like Fuller’s, to teach people to be free. Why do you think Nana still believes that Fuller’s utopian future will come to fruition?

In chapter 4, Sebastian says “I had been chosen for something. I had a path,” referring to the night when Nana tells him of his life’s path. He explains this passively. Do you think it’s because he has no say in the matter, or is it something else?

Discuss the irony of Fuller describing the universe as always transforming, but Nana forces her and Sebastian into an isolated lifestyle where they experience very little change. Do you think she deviates from Fuller’s thoughts, or is she doing exactly what she believes he taught?

Discuss punk rock’s underlying influence on the entire story and how it relates to what the characters are going through.

This novel has a theme of isolation versus community, especially on a individual level. Do you think that by the end, the story has changed from one to the other, and if so, why?

In chapter 12, Sebastian refers to the dome as symbolic to a snow globe: his world is being shaken by outside forces that he has no control over. Do you think Sebastian is better off because of it?

As was Fuller’s vision, the domes he wanted to build should be clear and in harmony with the planet. Discuss how Nana has warped this vision by forcing them into isolation and making them a tourist attraction. Does this hinder the validity of Fuller’s vision, or does this reinforce why he and domes failed in popularity and longevity?

In chapter 16, Jared finally talks to Sebastian about his heart transplant and claims that their band has to be good because he got to live, and someone else had to die. Discuss this in the context of the story and the Whitcombs’ attitude toward him.

Discuss the significance of painting the dome and Nana carrying on and finishing by herself. Was this a result of her finally fulfilling Fuller’s dream of a Geodome, or because of her being ill, or maybe some of both?

In chapter 24, Sebastian tells Meredith that he thinks the “band is dying.” Discuss the parallel with Jared’s illness and Sebastian’s relationship with Nana, and also Sebastian’s time staying with the Whitcombs. How are Jared’s and Nana’s illnesses and bouts in the hospital similar or different?

When Sebastian is teaching Jared geometry he describes a point as having “no length, breadth, depth at all” and then describes feeling like a point himself lately. Before Sebastian left Nana’s, he really had no worries, so discuss the deeper significance of his remark. Do you think he is better off one way or the other?

At the end of the novel, Sebastian describes when he used to scale the dome and how the world looked ideal from up there, how he had assumed it was, and how Nana had created her own world because the rest of the world wasn’t quite up to her standards. Sebastian chooses not to live the same life as Nana because he has experienced something richer, realizing the importance of relationships and human contact. Discuss some of these examples and why you think he differs from Nana in this thinking.

At the end of the novel after putting his headphones in to listen to punk, Sebastian says, “and I braced myself for the noise.” Discuss the different kinds of noise he is alluding to.