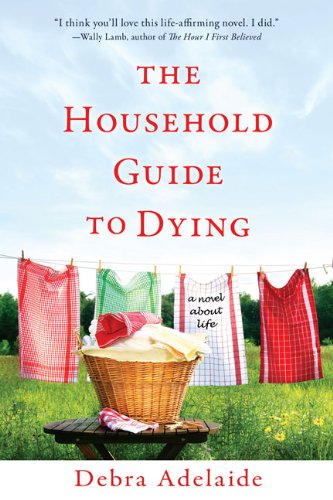 THE HOUSEHOLD GUIDE TO DYING

A Novel about Life

Now that popular household advice columnist Delia Bennet is dying from cancer, she’s compiled the ultimate to-do list: plan her daughter’s future wedding, fill the freezer with her family’s favorite meals- perhaps even do some matchmaking for her husband. But just as Delia comes to terms with the impossibility of ever tying every loose thread together in her too-short time, an unexpected visitor helps her believe in her life’s worth in a way no list ever could…

Now that popular household advice columnist Delia Bennet is dying from cancer, she’s compiled the ultimate to-do list: plan her daughter’s future wedding, fill the freezer with her family’s favorite meals- perhaps even do some matchmaking for her husband. But just as Delia comes to terms with the impossibility of ever tying every loose thread together in her too-short time, an unexpected visitor helps her believe in her life’s worth in a way no list ever could…

Debra Adelaide is the author of two previous novels in Australia including two novels, The Hotel Albatross, and Serpent Dust. She has worked as a researcher, editor and book reviewer, and has a PhD from the University of Sydney. She is presently a senior lecturer in creative writing at the University of Technology, Sydney where she lives with her husband and three children.

“With The Household Guide to Dying, Debra Adelaide serves up a tantalizing literary soufflé-a beautiful blending of lightness and substance that centers around Delia, as quirky, funny, feisty and brave a character as any in contemporary fiction. I think you’ll love this life-affirming novel. I did.”—Wally Lamb, author of The Hour I First Believed

“I found this novel entrancing. The Household Guide to Dying is a joyous book that resonates deep inside long after you finish. Delia’s magical, crystalline voice made me fervently wish that she was real and that I knew her.”—Patricia Wood, author of LOTTERY

“What an uplifting novel. It’s gorgeously written, while also being absolutely page- turning and breathtakingly tender. I adored the character of Delia and was riveted to her story from beginning to lovely and surprising end.”—Cecelia Ahern, author of Ps, I Love You and There’s No Place Like Here

In the novel, Debra Adelaide approaches a subject that could be sad by using wit and humor. For example, Delia’s letters to her fans are often very funny, but even more important, Delia herself might occasionally be rueful, but she refuses to be maudlin. And some of her ideas seem almost perverse—such as her idea for her book cover. Did the use of humor surprise you? Did it seem like a realistic response to the circumstances?

Mrs. Beeton is a great hero of Delia’s—she wrote the first serious book on housekeeping, and Delia has great respect for the importance of keeping house. Is keeping house important to you? Is it a source of pleasure, or guilt, or both?

Delia is extremely competent—hence her job as an advice columnist. She can also be tremendously controlling as a result, and over the course of her final months, she comes to realize that she has to relinquish control. Discuss the ways in which the same qualities that make us strong can also be our greatest weaknesses, and the greatest source of aggravation for those around us.

Delia’s chickens are named after each of the Bennett sisters from Jane Austen’s Pride And Prejudice, and Delia has some very interesting thoughts on Mrs. Bennett. Did you agree?

One of Delia’s most important tasks is to leave behind boxes for her daughters and husband containing special items. What could you imagine leaving behind for your loved ones?

Related to the above, Delia’s hope in leaving behind the boxes is for her husband and children to feel encouraged to move on with their lives. Delia doesn’t leave a box for her mother. Why is that, and what does the author seem to be suggesting about the essential difference between motherhood and other relationships?

Delia refuses to die quietly—she insists on confronting death head-on, from her research into coffins to her preparations for her family. Did you find her approach to her last days sympathetic?

Instead of telling the novel in a purely chronological fashion, the author decides to gradually dole out the story of Delia’s time with her first child over the course of the novel. Why do you think she made this decision, and how did it help you understand Delia’s actions during her final months?

Were you surprised by the real reason for Delia’s trip to Amethyst?

When Delia is a pregnant teenager, she leaves home to escape her mother’s disapproval. But years later, she and her mother are reunited over the loss of Delia’s first child. In what ways is this a theme throughout the novel—that certain ties are eternal?

How does Delia’s mother’s experience in losing her daughter echo Delia’s own experience in saying goodbye to Sonny? How are all of these various farewells then brought together in the last pages of the novel?

When Delia finally meets the woman who received Sonny’s heart, we learn the ways in which Sonny has become a part of her. How did this fit in thematically with the rest of the novel?

The novel focuses almost entirely on Delia’s experiences—the author doesn’t spend much time delving into what Delia’s daughters or husband might be feeling. Why do you think that is? Did it bother you that the novel didn’t concern itself more with the feelings of Delia’s family members? What does this say about the solitariness of Delia’s journey?

Did the novel impact your understanding of what the experience of dying might be like? In what ways? Did you find the final pages uplifting, sad, peaceful? Did it ultimately feel convincing?

Delia spends a good bit of time imagining what book she wants to be reading at the end. What would you choose for your last book?