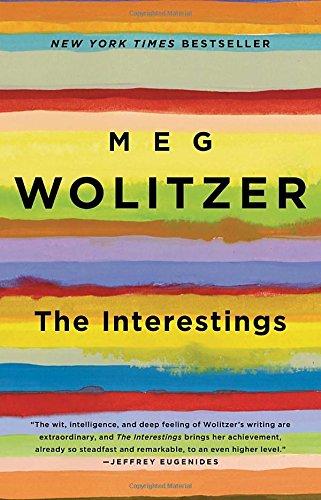 The summer that Nixon resigns, six teenagers at a summer camp for the arts become inseparable. Decades later the bond remains powerful, but so much else has changed. In The Interestings, Wolitzer follows these characters from the height of youth through middle age, as their talents, fortunes, and degrees of satisfaction diverge.

The kind of creativity that is rewarded at age fifteen is not always enough to propel someone through life at age thirty; not everyone can sustain, in adulthood, what seemed so special in adolescence. Jules Jacobson, an aspiring comic actress, eventually resigns herself to a more practical occupation and lifestyle.

The summer that Nixon resigns, six teenagers at a summer camp for the arts become inseparable. Decades later the bond remains powerful, but so much else has changed. In The Interestings, Wolitzer follows these characters from the height of youth through middle age, as their talents, fortunes, and degrees of satisfaction diverge.

The kind of creativity that is rewarded at age fifteen is not always enough to propel someone through life at age thirty; not everyone can sustain, in adulthood, what seemed so special in adolescence. Jules Jacobson, an aspiring comic actress, eventually resigns herself to a more practical occupation and lifestyle. Her friend Jonah, a gifted musician, stops playing the guitar and becomes an engineer. But Ethan and Ash, Jules's now-married best friends, become shockingly successful-true to their initial artistic dreams, with the wealth and access that allow those dreams to keep expanding. The friendships endure and even prosper, but also underscore the differences in their fates, in what their talents have become and the shapes their lives have taken.

Wide in scope, ambitious, and populated by complex characters who come together and apart in a changing New York City, The Interestings explores the meaning of talent; the nature of envy; the roles of class, art, money, and power; and how all of it can shift and tilt precipitously over the course of a friendship and a life.

Meg Wolitzer’s previous novels include The Wife, The Position, The Ten-Year Nap, and The Uncoupling. She lives in New York City.

“Remarkable . . . [The Interestings’s] inclusive vision and generous sweep place it among the ranks of books like Jonathan Franzen’s Freedom and Jeffrey Eugenides The Marriage Plot. The Interestings is warm, all-American, and acutely perceptive about the feelings and motivations of its characters, male and female, young and old, gay and straight; but it’s also stealthily, unassumingly, and undeniably a novel of ideas. . . . With this book [Wolitzer] has surpassed herself.”—The New York Times Book Review

“A victory . . . The Interestings secures Wolitzer's

place among the best novelists of her generation. . . . She's every bit

as literary as Franzen or Eugenides. But the very human moments in her

work hit you harder than the big ideas. This isn't women's fiction.

“The big questions asked by The Interestings are about

what happened to the world (when, Jules wonders, did 'analyst' stop

denoting Freud and start referring to finance?) and what happened to

all that budding teenage talent. Might every privileged schoolchild

have a bright future in dance or theater or glass blowing? Ms. Wolitzer

hasn’t got the answers, but she does have her characters mannerisms

“I don't want to insult Meg Wolitzer by calling her sprawling, engrossing new novel, The Interestings,

her most ambitious, because throughout her 30-year career of turning

out well-observed, often very funny books at a steady pace, I have no

doubt she has always been ambitious. . . . But “The Interestings”

crushingly insightful; she doesn't just mine the contemporary mind, she

Think about how talent is presented in the book. In your opinion, is it something you are born with or something you work hard to achieve? What is Meg Wolitzer saying about early talent? How is it important to future success? What roles do money and class play in fostering talent? Think about Jules and Ash. How does money influence the trajectories of their lives?

Single parents, lost parents, and absent parents play a role in this novel. In what ways do the families the characters were born into shape their futures? Ash and Goodman are the only characters to come from an intact nuclear family that is able to provide for all their needs. Do you think this is necessarily a good thing for Goodman? What about Ash?

Despite the well–quoted sentiment that “you can’t go home again,” Jules tries to return to the place that felt like her spiritual, emotional, and artistic home. Are there circumstances in life in which you can go home again successfully? Is Jules foolish to give up her current life for something much more uncertain? What positive changes does the experience bring?

Despite how much she wants to, Jules cannot make herself fall in love with Ethan. Do you wish she were able to? Do you think Jules wishes she could? What about Ethan?

Ethan is one of the most noble characters in the book, and yet he has trouble reconciling his son’s condition and lies to Ash to avoid going to Mo’s evaluation. How does Ethan’s ambivalence about Mo change the way you feel about him? How do you feel about Jules’s complicity in his deception?

The shift from the seventies to the eighties to the current moment is an important one depicted in the book. What do you think Meg Wolitzer is trying to say about art and how art is sold? How does the commoditization of art change the role of the artist? Was the art of the seventies as pure as it seemed to the creators? The Wunderlichs remain true to an even earlier version of what art should be. What are the positives of that vision? What are its limits?

What role does geography play in the book? Think about the different spaces and homes represented: Manhattan, Underhill, Spirit–in–the–Woods. What do they say about the people who live in them? Think about Jules’s own feelings about her mother’s home in Underhill compared with the Wolfs’ home in Manhattan. What do those two spaces mean to her?