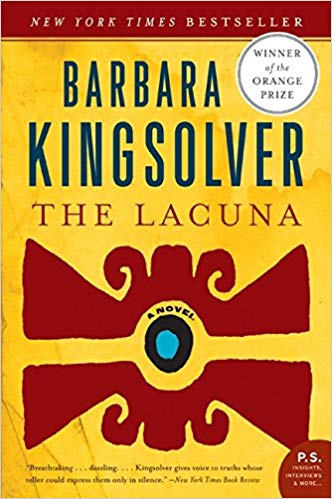 In this powerfully imagined, provocative novel, Barbara Kingsolver takes us on an epic journey from the Mexico of artists Diego Rivera and Frida Kahlo to the America of Pearl Harbor, FDR, and J. Edgar Hoover. The Lacuna is the poignant story of a man pulled between two nations as well as an unforgettable portrait of the artist—and of art itself.

In this powerfully imagined, provocative novel, Barbara Kingsolver takes us on an epic journey from the Mexico of artists Diego Rivera and Frida Kahlo to the America of Pearl Harbor, FDR, and J. Edgar Hoover. The Lacuna is the poignant story of a man pulled between two nations as well as an unforgettable portrait of the artist—and of art itself.

Barbara Kingsolver is the author of seven works of fiction, including the novels The Lacuna, The Poisonwood Bible, Animal Dreams, and The Bean Trees, as well as books of poetry, essays, and creative nonfiction. Her most recent work of nonfiction is the enormously influential bestseller Animal, Vegetable, Miracle: A Year of Food Life. Kingsolver’s work has been translated into more than twenty languages and has earned literary awards and a devoted readership at home and abroad. In 2000, she was awarded the National Humanities Medal, our country’s highest honor for service through the arts. She lives with her family on a farm in southern Appalachia.

“Rich…impassioned…engrossing…Politics and art dominate the novel, and their overt, unapologetic connection is refreshing.”
—Chicago Tribune

“Shepherd’s story in Kingsolver’s accomplished literary hands is so seductive, the prose so elegant, the architecture of the novel so imaginative, it becomes hard to peel away from the book.”
—Pittsburgh Post-Gazette

The word “lacuna” means many things: a missing piece of a manuscript, a gap in history or knowledge, a tunnel or passage leading from one place to another.  What are some of the lacunae in this novel?

Several characters repeat the phrase: “The most important part of a story is the piece of it you don’t know.”  What does this mean to you, in terms of both public and private life?  Are you likely to give this consideration more weight, since reading the novel?

Given the unusual presentation of the novel, as diary entries written by a person who does not want to be known, how did you come to know Harrison Shepherd?  Which of his passions or dreads evoked a connection for you?

The opening paragraph of the novel promises: “In the beginning were the howlers,” and suggests they will always be with us.  As you read, did you find yourself thinking of modern occasions of media “howlers” purveying gossip, fear, and injurious misquotes?  Why does this industry persist?  Has an increasingly rapid news cycle changed its power?

Why do you think Kingsolver used articles from real news sources along with fictional ones in the novel?

Did any historical revelations in this novel surprise you?  How has our national character changed from earlier times?  How would we now respond, for example, to the universal rationing imposed during World War II?  Or to the later events aimed at containing “un-American activities?”  What elements shape these responses?  What is the value, in your opinion, of the historical novel as a genre?

What places or sensory events in the novel appealed to you most?  Are you a more visual, auditory, or olfactory sort of person?  What sensory impressions stayed with you after you had finished the book?

The two important women in Harrison Shepherd’s life, Violet Brown and Frida Kahlo, seem to be opposites at first glance.  Do they also share similarities?  What cemented the relationships, in each case?  Do you find these women, in their similar or opposing ways, emblematic of women’s modes of adapting to difficulty, or exerting power?

Why would a friend as prudent as Mrs. Brown disregard the last wishes of someone to whom she was so loyal?  Were her actions believable?  Were they moral?  What do you think of Shepherd’s final characterization of their relationship as “a great love?”

On page 424, Arthur Gold complains that patriotism is coming to be defined as intolerance of dissent, and that the consequences could be dangerous.  What do you think of his diagnosis?  How do you interpret his advice that anti-communism has nothing to do with communism?

In Shepherd’s testimony before the HUAC, he said that people in Mexico seemed to have more art than they had hopes, but here he’d found people “bursting with hope but not many songs… So I decided to try my hand at making art for the hopeful. Because I wasn’t any good at the other thing, manufacturing hopes for the artful.  America was the most hopeful place I’d ever imagined.”  Given his culturally mixed heritage and disorienting childhood, what do you think appealed to him about becoming a writer in the U.S.?  Do you consider it a hopeful place?

Do you believe the novel ended with optimism, or sadness?