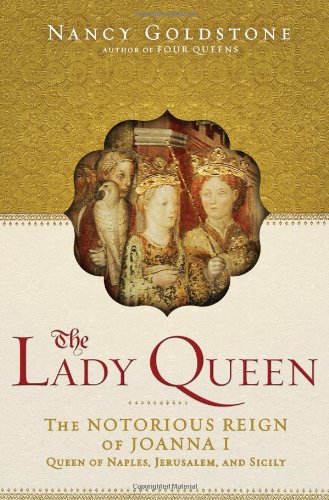 The Notorious Reign of Joanna I

The riveting history of a beautiful queen, a shocking murder, a papal trial — and a reign as triumphant as any in the Middle Ages.

On March 15, 1348, Joanna I, Queen of Naples, stood trial for her life before the Pope and his court in Avignon. She was twenty-two years old. Her cousin and husband, Prince Andrew of Hungary, had recently been murdered, and Joanna was the chief suspect. Determined to defend herself—Joanna won her acquittal against enormous odds. Returning to Naples, she ruled over one of Europe’s most prestigious courts for more than thirty years—until she was herself murdered.

The riveting history of a beautiful queen, a shocking murder, a papal trial — and a reign as triumphant as any in the Middle Ages.

On March 15, 1348, Joanna I, Queen of Naples, stood trial for her life before the Pope and his court in Avignon. She was twenty-two years old. Her cousin and husband, Prince Andrew of Hungary, had recently been murdered, and Joanna was the chief suspect. Determined to defend herself—Joanna won her acquittal against enormous odds. Returning to Naples, she ruled over one of Europe’s most prestigious courts for more than thirty years—until she was herself murdered.

As courageous as Eleanor of Aquitaine, as astute and determined as Elizabeth I of England, Joanna was the only female monarch in her time to rule in her own name. She was notorious: The taint of her husband’s death never quite left her. But she was also widely admired: Dedicated to the welfare of her subjects and realm, she reduced crime, built hospitals and churches, and encouraged the licensing of women physicians. While a procession of the most important artists and writers of her day found patronage at her glittering court, the turmoil of her times swirled around her: war, plague, intrigue, and the treachery that would, ultimately, bring her down.

As she did in her acclaimed Four Queens, Nancy Goldstone takes us back to the turbulent and colorful Middle Ages, and with skill and passion brings fully to life one of history’s most remarkable women. Her research is impeccable, her eye for detail unerring, and in The Lady Queen she paints a captivating portrait of medieval royalty in all its incandescent complexity.

Nancy Goldstone is the author of Four Queens: The Provençal Sisters Who Ruled Europe and coauthor (with her husband Lawrence Goldstone) of five books, including Out of the Flames, The Friar and the Cipher, and Warmly Inscribed. She lives in Westport, Connecticut.

“In scholarly but accessible prose, popular historian Goldstone underscores the many significant accomplishments of this exemplary queen. A thoroughly intriguing portrait of a neglected historical figure.”—Kirkus

“Veteran author Goldstone expertly describes bloodthirsty 14th-century politics and the complex family entanglements that encouraged siblings and cousins to clash over kingdoms like toddlers brawling over toys… Packed with action and effortless to read, Goldstone’s account will satisfy scholars and entertain book clubs with a heroine who had persistence and unbounded dedication to her realm.”—Publishers Weekly (starred review)

“Court intrigue, the murder of a member of a royal house, and a sensational trial: many authors use these elements in combination to forge page-turning medieval mysteries. Goldstone, author of Four Queens (2007), proves once again that truth is often stranger and more intriguing than fiction. Choosing as her subject Joanna, the notorious queen of Naples and titular queen of Jerusalem and Sicily from 1343 to 1382, she chronicles the fascinating life of one of the few women in her time who ruled in her own name…a life well worthy of historical examination.”—Booklist

“The Lady Queen weaves the story of one of the most extraordinary (and unjustly overlooked) rulers of the Middle Ages. The incredible episodes in Joanna’s history—not only murder and plague, but also cannibalism and even a medieval-style credit crunch—sometimes seem like something out of one of Boccaccio’s more fantastical tales. In bringing it all together, Nancy Goldstone has produced the most compelling history of the “calamitous fourteenth century” since A Distant Mirror.”—Ross King, author of Brunelleschi’s Dome, Michelangelo & the Pope’s Ceiling, and The Judgment of Paris

Do you think Joanna conspired to kill her husband Andrew?  If not, who do you think masterminded the crime?   How much do you think Elizabeth of Hungary’s refusal to accept the terms of the original agreement between Robert the Wise and Carobert contributed to her son’s death?  Why do you think she persisted in pursuing policies which she knew increased the danger around him?

As a woman attempting to rule in her own name during the Middle Ages, Joanna had to overcome extraordinary obstacles and numerous threats to her survival.  Although endowed with great courage, this attribute alone would not have been enough to secure her position.  What other character traits and skills did she develop that allowed her to triumph over her many adversaries?  Did any of these contribute to her downfall?

Do you think Joanna was more or less effective as a ruler because she was a woman, or do you believe that the skills of leadership do not relate to gender?

A handful of women, including Eleanor of Aquitaine, Blanche of Castile, and Elizabeth I of England, are generally recognized by historians as exercising real authority during their lifetimes and achieving a measure of success on a par with those of their male counterparts.  Do you think that Joanna’s accomplishments merit her inclusion in this group?  How do you think her reign compared to that of Elizabeth I, for example?

Throughout history, monarchs have secured their thrones by dispensing with their closest rivals.  For example, at the beginning of his reign, Edward III of England had his mother’s lover, Roger Mortimer, overthrown and executed in order to establish his own power.  Similarly, Elizabeth I had her cousin and rival Mary, queen of Scots, placed under house arrest for eighteen years before finally trying and executing her for treason.  Given this context, what do you think of Joanna’s treatment of her sister Maria?  The sisters’ relationship seems to have improved over time—what do you think is responsible for this?

What do you think of Joanna’s attitude toward Jeanne of Durazzo’s prospective marriage to the king of Sicily?  Do you think that Joanna was being too hard on her niece or that Jeanne should have married Frederick of Sicily even though she didn’t want to for the sake of her kingdom?

The Church was much more active in temporal affairs during the Middle Ages than it is today.  Bearing this in mind, of the various popes Joanna dealt with during her lifetime, which one do you think was the most effective at guiding the Church both spiritually and politically?

At the beginning of the Great Schism, Joanna believed Cardinal Orsini when he told her that Urban VI was “not the true pope” because the pressure brought to bear upon the cardinals to choose an Italian had compromised his election.  The people of Naples thought that the nullification of the election was a cynical gesture by a primarily French Curia to rid themselves of an inconvenient Italian pontiff.  Which do you believe is the truth?

Joanna’s story is filled with strong aristocratic women who influenced events and exercised significant political power both within their kingdoms and internationally.  Yet it is still a commonplace among historians that women were powerless victims in the Middle Ages.  Do you think that the evidence of Joanna’s reign is sufficient to cast doubt on this theory, or is more research needed?

Do you think that Joanna is a good role model for women seeking political office today?