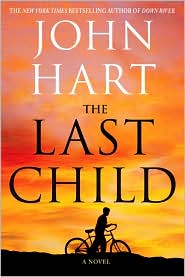 John Hart’s New York Times bestselling debut, The King of Lies, announced the arrival of a major talent. With Down River, he surpassed his earlier success, transcending the barrier between thriller and literature and winning the 2008 Edgar Award for best novel. Now, with The Last Child, he achieves his most significant work to date, an intricate, powerful story of loss, hope, and courage in the face of evil.

John Hart’s New York Times bestselling debut, The King of Lies, announced the arrival of a major talent. With Down River, he surpassed his earlier success, transcending the barrier between thriller and literature and winning the 2008 Edgar Award for best novel. Now, with The Last Child, he achieves his most significant work to date, an intricate, powerful story of loss, hope, and courage in the face of evil.

Thirteen year-old Johnny Merrimon had the perfect life: a warm home and loving parents; a twin sister, Alyssa, with whom he shared an irreplaceable bond. He knew nothing of loss, until the day Alyssa vanished from the side of a lonely street. Now, a year later, Johnny finds himself isolated and alone, failed by the people he’d been taught since birth to trust. No one else believes that Alyssa is still alive, but Johnny is certain that she is—confident in a way that he can never fully explain.

Determined to find his sister, Johnny risks everything to explore the dark side of his hometown. It is a desperate, terrifying search, but Johnny is not as alone as he might think. Detective Clyde Hunt has never stopped looking for Alyssa either, and he has a soft spot for Johnny. He watches over the boy and tries to keep him safe, but when Johnny uncovers a dangerous lead and vows to follow it, Hunt has no choice but to intervene.

Then a second child goes missing . . .

Undeterred by Hunt’s threats or his mother’s pleas, Johnny enlists the help of his last friend, and together they plunge into the wild, to a forgotten place with a history of violence that goes back more than a hundred years. There, they meet a giant of a man, an escaped convict on his own tragic quest. What they learn from him will shatter every notion Johnny had about the fate of his sister; it will lead them to another far place, to a truth that will test both boys to the limit.

Traveling the wilderness between innocence and hard wisdom, between hopelessness and faith, The Last Child leaves all categories behind and establishes John Hart as a writer of unique power.

John Hart is the Edgar Award winning author of two New York Times bestsellers, The King of Lies and Down River. His books have been translated into twenty-six languages and published in over thirty countries. A former criminal defense attorney, John has also worked as a banker, stockbroker and apprentice helicopter mechanic. Other than writing, his favorite job was pouring pints in a London pub. A husband and father of two, John still lives in his native North Carolina, where he writes full-time.

“A magnificent creation, Huck Finn channeled through Lord of the Flies.”—The Washington Post

“In his third novel, Edgar-winner Hart confronts murder, depravity, betrayal and the like, while still finding room for tenderness.”
—Kirkus Reviews (starred review)

“Hart once again produces a novel that is elegant, haunting, and memorable. His characters are given an emotional depth that genre characters seldom have, and the graceful, evocative prose lifts his stories right out of their genre and into the realm of capitaly-L literature. A must-read for every variety of fiction reader.” —Booklist (starred review)

“Hart spins an impressively layered tale of broken families and secrets that can kill.”—Publishers Weekly

What is the meaning of the title? Who is “The Last Child”?

The novel is not just about Johnny’s search for Alyssa. It’s also about his quest for power. Where does Johnny look for power and does he ever truly find it? If so, where?

In the beginning of the novel we find Katherine in a state of utter collapse. Is her condition understandable, given the circumstances? If not, does she redeem herself?

Why does Detective Hunt care so much for Katherine and Johnny? Why does he love her so deeply and what does he see in the boy that he finds so remarkable? How do those feelings contrast with the way he sees his own son? His own life?

Revisit the opening of Chapter Fourteen: Johnny’s ritual with the fire. We find out that Johnny has had a severe crisis of faith since Alyssa disappeared, and for what he was about to do, he “needed older gods.” What draws Johnny to “older gods”? What kind of power do they have that the God of his childhood does not?

By the end of the novel, Johnny comes to believe that Freemantle was, indeed, set in motion as an instrument of God. If this the case, by what means did God put Freemantle in motion? And given the debt that Freemantle owes to Johnny’s family, was the price too high, or was it fair? Is life, indeed, a circle?

We see two preachers in Johnny’s life, one described as, “fingernails buffed and fat face shining,” and one described as “a blade of a priest in white, flashing robes.” How do these figures reflect the changing nature of Johnny’s faith? At the end of the novel, does he believe in the same God he believed in before Alyssa disappeared or does he still believe in other sources of power?

Freemantle believes that crows have the power to collect the souls of the dead. This is why he fears them. If the crows are not after the soul of Freemantle’s daughter, as Freemantle originally believes, why then are they following him? Do the crows have another goal in mind? Is the goal accomplished?

Many people blame themselves for things that have happened in the past—Johnny, Hunt, Katherine, Jack, Levi Freemantle, and others. How does guilt motivate each of them to act? Where does the real guilt lie in the story?

The novel opens on a view of the North Carolina back country. What role does the setting have in the story? Do you think Johnny’s story have the same impact if it took place in a different state, or in a different country?