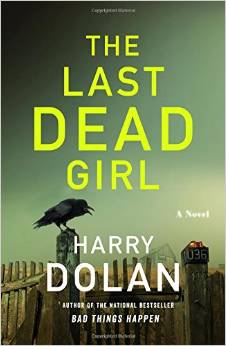 On a rainy night in April, a chance encounter draws David into a romance with Jana Fletcher, a beautiful young law student. Jana is an enigma: living in a run-down apartment with only the barest of possessions, sporting a bruise on her cheek that she refuses to explain. David would like to know her secrets, but he lets them lie—until it’s too late.

When Jana is brutally murdered, the police consider David a prime suspect.

On a rainy night in April, a chance encounter draws David into a romance with Jana Fletcher, a beautiful young law student. Jana is an enigma: living in a run-down apartment with only the barest of possessions, sporting a bruise on her cheek that she refuses to explain. David would like to know her secrets, but he lets them lie—until it’s too late.

When Jana is brutally murdered, the police consider David a prime suspect. But as he sets out to uncover the truth, he soon learns that Jana’s death may be related to an earlier murder, one that she was obsessed with during the last weeks of her life.

And as he retraces her steps, he begins to realize that he’s treading a very dangerous path—and that her killer is watching every move he makes.

Harry Dolan graduated from Colgate University, where he majored in philosophy and studied fiction-writing with the novelist Frederick Busch. He earned a master’s degree in philosophy from the University of North Carolina at Chapel Hill and currently works as a freelance editor. He grew up in Rome, New York, and now lives in Ann Arbor, Michigan, with his partner Linda Randolph.

“Harry Dolan knows how to write a book that grabs you.” —The Arizona Republic

“A neat technical achievement [and] a nuanced piece of fiction.” —Tom Nolan, The Wall Street Journal

“A riveting crime novel…Relentless pacing, a wry sense of humor, and an engaging protagonist add up to another winner for Dolan.” —Publishers Weekly

“The rare crime novel with something for everyone who reads crime fiction.” —Kirkus Reviews (starred review)

The Last Dead Girl features many strong women, most notably Jana and Sophie, who both make the first move with David, rather than the other way around. In what other ways are these women similar? How are they different? What does their confidence say about both of them, and how does it shape their stories?

Do you think David’s lack of control in his two relationships—both in their beginnings and their endings—serves as a catalyst for him to pursue clues in Jana’s case so thoroughly? Or is this curiosity a facet of David’s character?

Initially, there seems to be only the slenderest link between Gary Pruett’s case and Jana’s death. Why, then, do you think David researches Pruett’s case so passionately from the start?

The young painter Angela Reese tells David that she’s okay with Gary’s current situation—because he’s not her problem, and she’s not responsible for him. How do other characters in the book contradict this train of thought, the idea that we only take care of ourselves? Who feels the most responsibility for others in this story? Who doesn’t? Why?

Both David and Roger Tolliver are interested in Jana romantically. After what happened to her, why do you think Jana is so much more comfortable with David, a stranger, than she is with Roger, her admired professor?

What do you think of Sophie’s confession, when she ultimately tells David the real reason for her infidelity? Do you think they would have been happy if he’d known the truth before he met Jana? Or do you think that David needed to meet Jana, no matter what?

Discuss Angela Reese’s idea of duality. What are some of the different sides that each character shows throughout the book?

Discuss the relationship between the brothers Neil and Gary Pruett. Do you think they’re both beyond saving, as David seems to think? Do you think there’s any real compassion left, on either end?

Why do you think the author chose to tell this story in alternating narratives, and with an irregular timeline? Did it add to the atmosphere of the novel?

Most of the characters in The Last Dead Girl have secrets, both good and bad, and no character seems to be purely good. Do you feel this is an authentic portrayal of human nature? Who do you relate to most in this story, and why?