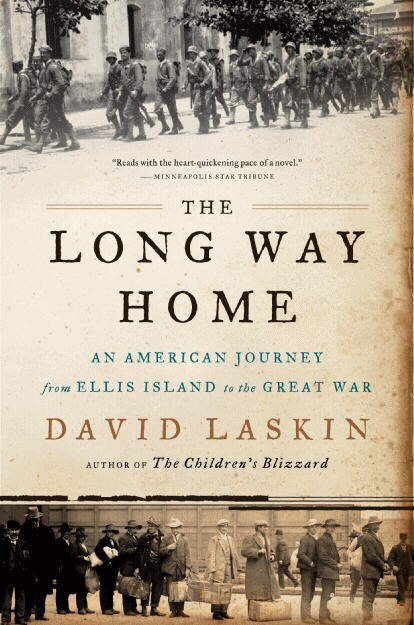 An American Journey from Ellis Island to the Great War

The United States has always been a nation of immigrants, never more so than in 1917 when the nation entered the First World War. Of the 2.5 million soldiers who fought with U.S. armed forces in the trenches of France and Belgium, some half a million – nearly one out of every five men – were immigrants. In The Long Way Home, David Laskin tells the stories of twelve of these immigrant heroes. Starting with their childhoods in Europe, the book unfolds the saga of their journeys to Ellis Island, their struggles to start over in the land of opportunity,

The United States has always been a nation of immigrants, never more so than in 1917 when the nation entered the First World War. Of the 2.5 million soldiers who fought with U.S. armed forces in the trenches of France and Belgium, some half a million – nearly one out of every five men – were immigrants. In The Long Way Home, David Laskin tells the stories of twelve of these immigrant heroes. Starting with their childhoods in Europe, the book unfolds the saga of their journeys to Ellis Island, their struggles to start over in the land of opportunity, and the ordeal of their return to Europe in uniform to fight—and win—a war that had already killed tens of millions.

In tracing the lives of these twelve men, the book captures the complex story of an immigrant generation—one that streamed into this country in unprecedented numbers around the turn of the last century, that sweated to support their families through back-breaking physical labor, and that fought loyally for their adopted country on the battlefields of Belleau Wood, Soissons, St. Mihiel, and the Argonne forest. Laskin also brings to light the tragic story of four German-speaking Americans who were imprisoned and tortured by U.S. military authorities for their refusal to serve on religious grounds.

Based on stories, letters, and diaries passed on by descendants as well as the author’s personal interviews with two foreign-born Doughboys who were still alive at the time he was researching the book, The Long Way Home evokes the dreams and the sacrifice at the heart of the American experience. 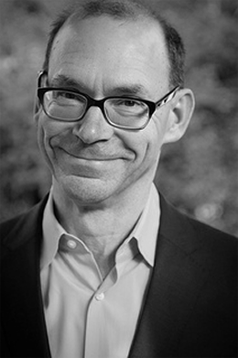 David Laskin was born in New York in 1953 and educated at Harvard College and New College, Oxford. For the past twenty-five years, Laskin has written books and articles on a wide range of subjects including history, weather, travel, gardens and the natural world. His most recent book, The Children’s Blizzard, won the Washington State Book Award and the Midwest Booksellers’ Choice Award for Nonfiction. Laskin’s other titles include Braving the Elements: The Stormy History of American Weather, Partisans: Marriage, Politics and Betrayal Among the New York Intellectuals, A Common Life: Four Generations of American Literary Friendship and Influence, and Artists in their Gardens (co-authored with Valerie Easton). A frequent contributor to The New York Times Travel Section, Laskin also writes for the Washington Post, the Seattle Times, and Seattle Metropolitan. He and his wife Kate O’Neill, the parents of three grown daughters, live in Seattle with their two sweet old dogs.

“A compelling book. . . . Imaginative. . . . Laskin mines family legends and official documents to tell the stories of these ordinary foot soldiers from Italy and Ireland, Poland and Russia, Slovakia and Norway. . . . Today’s immigrants don’t become Yanks in the trenches of France. That transformation occurs in the farmlands of Florida, the factories of Pennsylvania, the laboratories of California and, sometimes, on the battlefields of Iraq and Afghanistan. This story, like this country, never ends.” — The Washington Post

“David Laskin’s latest, The Long Way Home, reads with the heart-quickening pace of a novel as he focuses his gaze on a band of real-life characters who emigrated to the United States in the years just before World War I. . . . Laskin’s great genius for creating affection for long-dead heroes lies in his tireless research.” — The Minneapolis Star Tribune

“Compelling. . . . Laskin has built his book on dozens of interviews, family and regimental histories, military records and historical archives. He clearly has a firm grasp on a lot of detail, both military and personal.” — The Seattle Times

“Moving, revealing, and lovingly researched, this book is a must read, and a great read, for any of us whose forebears came from overseas-meaning just about all of us.” — Erik Larson, author of The Devil in the White City

1. Here in the U.S., the First World War is often called the “forgotten war,” overshadowed by the Civil War before it and the Second World War just a generation later.  Discuss how The Long Way Home  altered and informed your understanding of this chapter of American history.  Compare the American experience in the Great War to that of Britain, France and Germany.

2. Laskin structures his narrative as a series of overlapping stories of twelve men.  Did you find this an effective way of capturing the immigrant experience in the war?  How successfully do think the book balances the “foreground” stories of the individual men with the historical background of their period?  How else might this story have been told?

3. Teddy Roosevelt decried “hyphenated Americans” and insisted that the only true American was “100 percent American”—yet Laskin shows that thousands of immigrants made brave and loyal soldiers.  To what extent do you think that immigrants need to put the heritage and culture of their country of origin behind them in order to serve effectively in our armed forces?

4. The Ellis Island experience remains a powerful icon of American history—the Atlantic crossing in steerage, the confusing processing in the Registry Hall, the emotional reunion with relatives.  Did The Long Way Home teach you anything new or surprising about this experience?  Have any Ellis Island stories come down in your own families?  Discuss and compare.

5. In the popular imagination, World War I was an endless quagmire of trenches, mud, poison gas, and shell shock.  How does Laskin’s portrayal of the experiences of his twelve men confirm and/or depart from this popular image?  What were you most struck by in the war scenes that Laskin recreates?  Which battle did you find most gripping, most revealing, most disturbing?  Choose one war scene and talk about the details, style, point of view or narrative technique that made it come to life.

6. Immigration remains a critical and hotly debated subject in our society today.  What insights does The Long Way Home shed on our current immigration issues?  How do today’s immigrants compare with those who came through Ellis Island in terms of education, aspirations, attitudes toward their adoptive country?  What about  immigrants fighting in the United States armed forces today—how do you think their experiences compare with those of the men in The Long Way Home?

7. Laskin argues that the Great War was the watershed experience in the lives of the Ellis Island generation of immigrants—the key milestone in their journey to become Americans.  Do you agree with this thesis? If not, what other events, experiences, ideas would you point to that had a greater impact in Americanizing that generation?

8. The word “melting pot” is used frequently in connection with immigration to the U. S.—yet as The Long Way Home makes clear, the various groups in the melting pot rarely fused or “melted” into a consistent whole.  Italians, Jews, Poles, etc. retained their identities—and in many cases their descendants continue to hold onto the culture and pride of their ancestors.  Talk about the role of the melting pot in the American popular imagination.  What about your own families?  Discuss your various ethnic backgrounds and to what extent your heritage remains alive and important to you today.

9. Of the twelve men in the book, which one was your favorite—and why?  Laskin includes two Medal of Honor recipients, three men who died in action, one who was in the military but never shipped out, several who were ordinary soldiers who did nothing remarkable or distinguished.  Talk about how Laskin individualizes the members of his cast and what personal details you found particularly striking.  Which character would you most like to meet?  What would you ask him?

10. The story of the drafting, trial, imprisonment and torture of the three Hofer brothers and Jacob Wipf is one of the most disturbing parts of the book.  Talk about how you reacted to this element in the story and whether you think the author presented it fairly and impartially.  Do you think these Hutterite men were at fault for clinging so stubbornly to their refusal to do any non-combatant work in the army?  Or did you admire them for their willingness to sacrifice everything, even life itself, for their faith?  Compare the treatment these men endured at Alcatraz and Leavenworth with the conditions in which political prisoners are held today.  Broaden your discussion to examine the whole idea of conscientious objection and how to balance individual morality with the nation’s need for defense.

11. Discuss the style of The Long Way Home.  Do you think the style was well-suited to the subject matter?  Find and discuss passages that you found particularly well (or badly) written, or that stood out for other reasons.  Compare the book to other recent works of creative non-fiction – The Children’s Blizzard by the same author, Devil in the White City by Erik Larson, The Worst Hard Time by Timothy Egan.  Point to some of the techniques that these books employ in bringing history alive.

12. The book ends with an epilogue bringing the stories up to the present.  Did you think this was an effective way of ending the book – or do you feel it would have been better if Laskin stopped at the end of the war?  Did you read the end notes?  If so, how did they contribute to your understanding of the kind of material the author used in putting the story together?