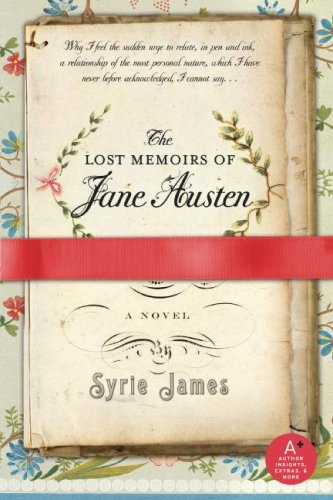 THE LOST MEMOIRS OF JANE AUSTEN

Many rumors abound about a mysterious gentleman said to be the love of Jane Austen’s life. At last, the truth may have been found  . . .

What if, hidden in an old attic chest, Jane Austen’s memoirs were discovered after hundreds of years? What if those pages revealed the untold story of a life-changing love affair? That’s the premise behind this spellbinding novel, which delves into the secrets of Jane Austen’s life, giving us untold insights into her mind and heart.

Jane Austen has given up writing when, on a fateful trip to Lyme, she meets the well-read and charming Mr.

Many rumors abound about a mysterious gentleman said to be the love of Jane Austen’s life. At last, the truth may have been found  . . .

What if, hidden in an old attic chest, Jane Austen’s memoirs were discovered after hundreds of years? What if those pages revealed the untold story of a life-changing love affair? That’s the premise behind this spellbinding novel, which delves into the secrets of Jane Austen’s life, giving us untold insights into her mind and heart.

Jane Austen has given up writing when, on a fateful trip to Lyme, she meets the well-read and charming Mr. Ashford, a man who is her equal in intellect and temperament. Inspired by the people and places around her, and encouraged by his faith in her, Jane begins revising Sense and Sensibility, a book she began years earlier, hoping to be published at last.

Syrie James has long been a fan and scholar of British literature of the 19th century, and of Jane Austen in particular. She was born in Poughkeepsie, New York, and moved west at age one because her father didn’t like shoveling snow. “My parents loved traveling,” Syrie says. “I was lucky enough to live in France for two years as a child, and I’d visited more than two dozen countries by age eight—an amazing experience.”

Syrie grew up in San Jose, California. When she was in the sixth grade, her grandparents gave her a battered old typewriter, and she wrote her first book. “Thankfully,” Syrie says, “I never showed it to anyone. But I was hooked. Creating stories and characters, and retreating into my imagination, was thrilling to me. I knew at that moment that I wanted to be a writer.”

Syrie married her college sweetheart, Bill James, and she considers their sons Ryan and Jeff to be her finest achievements. When she and her family moved to Los Angeles, it seemed a natural progression to write a screenplay. That first script immediately launched a screenwriting career which has spanned nearly two decades. Syrie is currently a member of the Writers Guild of America, Romance Writers of America, the Jane Austen Society of North America and the New Playwrights Foundation. She sold nineteen screenplays and teleplays to Tri-Star Pictures, Fox Family Films, ABC, CBS, NBC, FOX TV and the Lifetime Network, before following her passion and becoming a novelist. The Lost Memoirs of Jane Austen is her first work of historical fiction.

“I’ve always been a voracious reader,” Syrie says. She particularly enjoys historical fiction, women’s fiction, biography, memoir and historical romance. She decided to combine all her first loves, and write about Jane. “I had traveled extensively throughout England. I’d read and loved all of Jane Austen’s novels, and I’d seen every Jane Austen movie or mini-series ever made, some many times over. But her life story was filled with gaps, and left me unsatisfied. I found it hard to believe that this brilliant woman, who gave the world such wonderful and romantic stories, never fell in love herself. I decided to write the book that I wanted to read: to give Jane Austen a deep and loving connection with the man who was her soul mate, even if, in the end (as in history), they were unable to marry.” Syrie says she knew that Jane must tell the tale herself.

“The publication of my novel, The Lost Memoirs of Jane Austen, fulfills one of the greatest dreams of my life,” Syrie says. “Researching and writing the novel was a true labour of love. I am delighted to be able to share that story with everyone who harbors a similar passion for Jane.”

Syrie’s next novel for Avon, Charlotte Brontë’s Secret Diaries, will be published in 2009.

“Suspense builds, and it’s a tribute to the world James creates that readers will anxiously root for Jane to find true love and wealth even though we know it never happened. Deserves front-runner status in the saturated field of Austen fan-fiction and film.” —Kirkus Reviews

“… there are … no fewer than five new books with Austen as muse … the best of these is The Lost Memoirs of Jane Austen by Syrie James … James’s book imagines a Mr. Ashford for Jane, a man with whom she shares a good deal of passion in the two years preceding the publication of Sense and Sensibility … And if she didn’t she should have, as it makes for a compelling read even if you’re not someone who lives and breathes Austen.” —Susan Davis, The News & Observer

“Utterly charming, and remarkably authentic in creating Jane Austen’s voice, Syrie James’s The Lost Memoirs of Jane Austen made me want to pull out all my Jane Austen novels and read them again.” —New York Times Notable Book of the Year Author Deborah Crombie

“Austen and Mr. Ashford seem a perfect match in matters of head and heart . . . though she hews closely to the historic record, [James] creates . . .  will-they-or-won’t-they suspense that culminates with a proposal and an “intensely” kissed Austen. It’s a pleasant addition to the ever-expanding Austen-revisited genre.” —Publisher’s Weekly

Why did the author choose to write the story in the first person, as Jane Austen’s Memoirs? Do you think the novel would have been as effective if written in the third person narrative? Did you find yourself connecting with Jane Austen because it was written from her perspective?

Consider the scene in the parlor in chapter two, and the exchange between Jane and Mrs. Austen which follows. How many key characters and plot elements are set up in that short space of time? How do the dialog and action serve to introduce each character? How do these two scenes set the tone of the novel, and lay a foundation for the rest of the story?

Which character archetypes do we see in The Lost Memoirs that are reflections of the archetypes in Jane Austen’s novels?

When Jane meets Mr. Ashford, she feels she has written nothing new of value in nearly ten years, and has vowed to lay down her pen forever. Discuss the ways in which Mr. Ashford is influential in rekindling Jane’s interest in writing, and how the ups and downs of Jane’s relationship with him are interwoven into the plot of her revised version of Sense and Sensibility.

Why do you think Jane falls in love with Mr. Ashford? Name the qualities that make Mr. Ashford the ideal counterpart for Jane Austen, and worthy of her admiration and passion. Is his influence and encouragement the only reason she returns to writing? Or do you think he is merely the spark that ignites an already smoldering flame?

Compare and contrast the three offers of marriage Jane receives over the course of the book, and the men making the offers. Do you agree or disagree with Jane’s decisions in each case? Discuss her reasons for initially accepting Harris Bigg-Wither, and then refusing him. How different would her life have been if she had married him? Do you think she would have ever written again? Was she selfish for having refused a life of comfort for her mother and sister in a time when there were not many options open to women?

Money, and the abundance or lack of it, was a prevailing theme in Jane Austen’s work. In her unfinished novel, The Watsons, her heroine says: “Poverty is a great evil, but to a woman of education and feeling it ought not, it cannot be the greatest. I would rather be a teacher at a school (and I can think of nothing worse) than marry a man I did not like.” Do you think this statement reveals Jane Austen’s personal feelings? How is this theme expessed in The Lost Memoirs? Discuss the irony in Jane’s final decision, where she refuses to marry a man she loves deeply, knowing that he will suffer the same fate that she has herself renounced.

Discuss other ways in which money affects the characters in The Lost Memoirs. How and why did the death of Mr. Austen change the financial status of Jane and her mother and sister? Mrs. Austen considered themselves poor with only £500 a year, yet they kept three servants. How does that reflect on the gentry class of that time? How do you think the very poor of the time lived? Discuss why servants were considered such a necessity in that era before modern conveniences, and what functions they were required to perform.

Jane decides to publish her novel anonymously partly because of her society’s attitude towards the novel. Do you agree or disagree with her choice? How does their view of the novel compare to contemporary attitudes regarding popular entertainment, such as playing video games or watching television?

Discuss the pros and cons of primogeniture, which left all the land to the eldest son, and entail, which prevented the heir from dividing up the estate or selling any part of it. How did this enable the great landed families in 19th century England to maintain their wealth, status and power through the generations? In what way is Mr. Ashford an example of the sacrifices that were required along the way? Do you think the sacrifices were worth it?

Discuss the romantic moments in The Lost Memoirs. How does the author create and sustain sexual tension between the hero and heroine? How do the plot elements keep the story moving forward at a rapid pace?

Were you surprised when you learned Mr. Ashford’s secret? Discuss what might have happened if he’d been honest with Jane from the start. What does Jane’s returning all of his letters unopened say about her? Do you consider it justifiable, or a character flaw?

Consider the introduction of Isabella Churchill. How does the author establish her character traits and personality? How does Jane feel about Isabella, both before and after she learns the truth about her? In what ways does the Isabella storyline enhance the plot of The Lost Memoirs?

While reading The Lost Memoirs, did you learn anything new or surprising about Jane Austen’s life, and/or the customs or social conventions during Jane Austen’s era?

Jane’s younger brother Edward was adopted at age sixteen by Mr. Thomas Knight II, from whom he inherited a fortune and three large estates. How do you feel about Mr. and Mrs. Austen’s decision to allow their son’s adoption? How did Edward’s status as a wealthy landowner affect Jane’s life, and contribute to her emergence as a novelist?

What was your perception of Jane Austen and her work before you read The Lost Memoirs? Do you feel the same or differently after reading the novel?

What are some of your favorite moments in the book?

How did your experience reading The Lost Memoirs compare to Jane Austen novels you have read? In what ways was it similar or different? If you are not familiar with Jane Austen’s work, did The Lost Memoirs inspire you to read her novels? Why or why not?