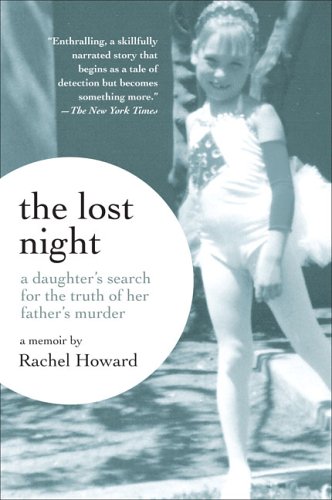 A Daughter's Search for the Truth of Her Father's Murder

“At about three thirty a.m on June 22, 1986, someone entered, through an unlocked sliding-glass door, my father’s house on the outskirts of the central California farming town where he had grown up. The intruder took a knife from the kitchen and stabbed my father as he lay sleeping next to his third wife.”

So begins Rachel Howard’s memoir about her father’s unsolved murder, which happened when she was just ten years old. But from the start The Lost Night is about something much deeper and more complex than justice. Writing more than 15 years after her father’s bizarre death,

“At about three thirty a.m on June 22, 1986, someone entered, through an unlocked sliding-glass door, my father’s house on the outskirts of the central California farming town where he had grown up. The intruder took a knife from the kitchen and stabbed my father as he lay sleeping next to his third wife.”

So begins Rachel Howard’s memoir about her father’s unsolved murder, which happened when she was just ten years old. But from the start The Lost Night is about something much deeper and more complex than justice. Writing more than 15 years after her father’s bizarre death, Rachel is not out to nab a killer, but to make peace with the unfathomable. The result of her riveting quest is a stunningly universal exploration of grief that turns the genre of true crime upside down.

Set in California’s agricultural Central Valley—an arid land of fertilizer and strip-malls vividly evoked in Howard’s unsentimental prose–The Lost Night is a richly woven exploration of memory and reconciliation. Stan Howard was a laid-back, handsome man who loved the music of Rod Stewart and seemed to have no enemies. His sudden and unexplained death left Rachel and her grandparents in shock, ill-equipped to talk about his murder and nearly estranged after years of silence. Rachel goes to live with her mother and her drug-addicted, abusive stepfather. In the days after the murder, she is taken to a psychiatrist but refuses to speak. For years she attempts to “pretend as though the murder never happened,” shaking off horrifying nightmares, salving her sense of abandonment with late-night sexual trysts, and burying any remembrance of her father.

It isn’t until Rachel is embarking on adulthood that she begins to face the reality of her father’s murder, eventually seeking the only two other people present at the scene of his death: Her father’s third wife, long an object of family suspicion, and her former stepbrother. Their revelations throw Rachel’s theories of her father’s death into chaos. Reconnecting with her father’s parents, she learns that truth—and resolution—are to be found in the delicate workings of memory, not in some detective’s dusty case book.

In a culture saturated with who-dunnits and murder mysteries, The Lost Night is a rare look at the deeper emotional aftermath of murder and grief, an experience that touches more lives than most Americans would like to believe. Compassionate and engrossing, The Lost Night shows us a side of murder seldom glimpsed.

Rachel Howard grew up in the “other California,” the flat, dry farmland of the Central Valley. She was earning lackluster grades in high school and planning to become a flag team instructor when she saw a statewide writing contest sponsored by UC Santa Barbara’s College of Creative Studies and entered on a lark. She won, and was petitioned into the school and given a fellowship. She has written about the arts for The San Francisco Chronicle, The Village Voice, The San Francisco Examiner, and many other publications. The Lost Night is her first book. She lives with her husband in San Francisco, where she is a member of the San Francisco Writers Grotto.

“As a detective, Ms. Howard fails. She never learns the identity of her father’s killer. But as a memoirist, she succeeds brilliantly. The Lost Night is enthralling, a skillfully narrated story that begins as a tale of detection but quickly becomes something more.” —The New York Times

“[T]urns out to be nothing like the narrowly focused true-crime narrative that the subtitle leads you to expect. Most of it is Ms. Howard’s own story, and that part is at least as involving as the appalling tale of her father’s murder, if not more so . . . Indeed, no small part of the force of The Lost Night comes from its author’s startling lack of self-pity . . . a quintessentially American narrative of self-creation and redemption, a postmodern “Gatsby” with a hard-earned, doubt-tinged happy ending. I don’t know when I’ve read a better first book.”
—The Wall Street Journal

“Powerful . . . more intense and real than your typical true-crime story . . . this heartfelt memoir is about one young woman reconciling with the past, and in that process discovering the difference between loving the living and missing the dead.” —The San Francisco Chronicle

“A stunning debut. Forgoing the true-crime treatment, Howard remains restrained, her focus on the broad emotional panorama of the story instead of lurid details and self-pity. In crisp, unadorned prose, she explores broken families, drugs, rural California, and the hard emotional work of remembering.” —Bookmarks Magazine

Rachel’s family life was already unstable before the murder: Her father had married three times, her stepfather verbally abused her and used drugs, and her parents moved her from one home to another. In a chapter just after the murder, ten-year-old Rachel confesses that her father’s death was almost a relief, because now the custody battles would be over. How do you think the memoir balances the shock of the murder with the other unsettling elements already present in Rachel’s childhood?

Rachel’s father was a die-hard fan of the rock singer Rod Stewart, and throughout the book Rachel returns to Stewart’s music to evoke memories and deepen her understanding of who her father was. What did you think of the use of this music to depict Stan’s character? Do you have any childhood memories strongly tied to certain music or songs?

Rachel writes that throughout her childhood she had learned to “hunker down and get through.” Could you relate to that feeling even if you have never experienced the murder of a family member?

Rachel writes that she “tried to pretend the murder never happened” for years, not even seeking therapy until she was 21. Were you surprised by the way Rachel’s family members chose to handle talking about the murder just after her father’s death? Did you ever think of murder as a taboo subject before reading the book? What did you think of the stigma of murder after?

The book paints a vivid picture of California’s agricultural Central Valley, with many details of its smells and sights and sounds. Why do you think the author took such care to evoke a strong sense of place? Did it enhance your experience of the memoir?

Rachel expresses deeply conflicted and unflattering feelings about her father’s third wife, Sherrie, as do the members of her family. Do you feel she was fair to Sherrie? What is your personal reading of Sherrie’s personality?

In a later chapter, Rachel writes that “I was trying to live my life according to some made-for-TV script wherein the heroine, haunted by her father’s past, devotes her life to bringing his killer to justice. But that heroine wasn’t me.” How does The Lost Night differ from other books you may have read about murder, such as true crime accounts and mysteries?

Were you frustrated or satisfied by the end of the book? Do you feel Rachel should have pressed more forcefully for justice in her father’s case? What do you think you would do if a member of your own family had been murdered?