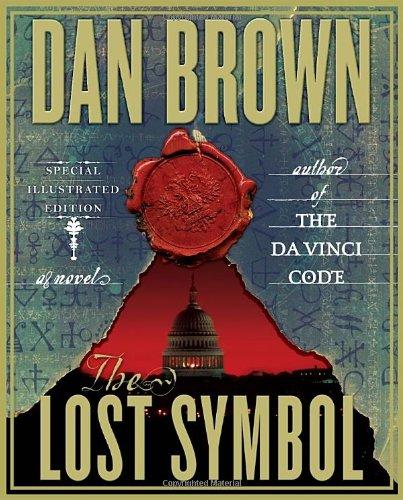 Dan Brown’s record-breaking novel The Lost Symbol weaves a breathtaking trail through the hidden artwork, chambers, tunnels, and temples of our nation’s capital. Now the fascinating visuals appear right before your eyes, making for a sumptuous reading experience that brings alive Robert Langdon’s heart-stopping race through a little-known Washington, D.C. Revealing a world of ancient mysteries, stunning history, and secret societies, this Special Illustrated Edition unveils a whole new level of intrigue and fascination within The Lost Symbol. Over one hundred full-color images are featured throughout this lavishly illustrated gift edition—an essential companion to the original.

Dan Brown’s record-breaking novel The Lost Symbol weaves a breathtaking trail through the hidden artwork, chambers, tunnels, and temples of our nation’s capital. Now the fascinating visuals appear right before your eyes, making for a sumptuous reading experience that brings alive Robert Langdon’s heart-stopping race through a little-known Washington, D.C. Revealing a world of ancient mysteries, stunning history, and secret societies, this Special Illustrated Edition unveils a whole new level of intrigue and fascination within The Lost Symbol. Over one hundred full-color images are featured throughout this lavishly illustrated gift edition—an essential companion to the original.

Dan Brown is the author of numerous #1 bestselling novels, including the recent record-breaking The Lost Symbol, which had the biggest one-week sale in Random House history for a single title. His previous title, The Da Vinci Code, has sold more than 80 million copies worldwide, making it one of the bestselling novels of all time. In addition to numerous appearances on The Today Show, Mr. Brown was named one of the World’s 100 Most Influential People by Time Magazine. He has appeared in the pages of Newsweek, Forbes, People, GQ, The New Yorker, and others. His novels are published in over 50 languages around the world.

“Dan Brown brings sexy back to a genre that had been left for dead . . . His code and clue-filled book is dense with exotica . . . amazing imagery . . . and the nonstop momentum that makes The Lost Symbol impossible to put down. Splendid. . . . Another mind-blowing Robert Langdon story.”—New York Times

“The wait is over. The Lost Symbol is here—and you don’t have to be a Freemason to enjoy it . . . .Thrilling and entertaining, like the experience on a roller coaster.”—Los Angeles Times

“Robert Langdon remains a terrific hero, a bookish intellectual who’s cool in a crisis and quick on his feet . . . .The codes are intriguing, the settings present often-seen locales in a fresh light, and Brown keeps the pages turning.”—Entertainment Weekly

“A fascinating pleasure. . . . Upends our usual assumptions about the world we think we know.”—Newsweek

How familiar were you with Freemasonry before reading the novel? How did your impressions of the organization shift throughout the book, from the chilling prologue to Peter Solomon’s philosophical comments near the end?

How do Peter Solomon’s students (including Robert) reconcile their admiration for him with the knowledge that he is a Mason? Did it surprise you to learn about well-known American historical figures who were Masons and to read about scientists who were intrigued by mysticism and other occult belief systems?

Discuss the novel’s grand theme of architecture. How did The Lost Symbol change the way you think about the way buildings are designed and the intention of their architects—their creators? What most surprised you about the tributes to the past—and visions of the future—that are captured in the landmarks of Washington, D.C.?

Mal’akh considers the polarity of angels and demons, noting that “the guardian angel who conquered your enemy in battle was perceived by your enemy as a demon destroyer.” What does this indicate about Mal’akh’s perception of himself in the world? How can his evil nature be explained? Why is he able to consider only his own suffering, while relishing the suffering of others?

How did you react to Katherine Solomon’s work in Noetic Science? What motivates her to investigate the tangible aspects of the human soul (attempting to weigh it, even)? How would it change the world if there were more tangible evidence of the spiritual world? How is Katherine Solomon’s perception of science different from Robert Langdon’s?

At the heart of the novel is a quest to unlock wisdom despite the need to keep it “locked” since it can be used for destructive purposes. Do you believe that freedom of knowledge (Wikipedia, the World Wide Web) is a blessing or a curse?

The novel’s epigraph, from Manly Hall’s The Secret Teachings of All Ages, encourages readers to become aware of the meaning of the world. What mysteries about the world, and life, do you think are the most important ones to explore?

How does Mal’akh amass enough power to turn his personal plot into a national security threat? What does his rise to power indicate about the potential of mind over body and a human being’s ability to play a variety of roles for unsuspecting audiences?

The final chapter raises intriguing questions about the possibility of a multifaceted God and the potential to find God in all of humanity. Can there be a universal definition of enlightenment?

While interpreting the Masonic Pyramid’s final inscription, Robert Langdon tries to bring order out of chaos by interpreting each symbol as a metaphor. Peter Solomon instructs him to be literal and accept the inscription as a true map. What does this exchange say about the best way to interpret all sacred messages?

In the epilogue what truths do Katherine Solomon and Robert Langdon experience, at sunris atop America’s ultimate symbol? From your perspective, what does the Capitol symbolize?

What does The Lost Symbol indicate about the power of the word—whether ancient texts or bestselling twenty-first-century novels?

What common thread runs through this and each of Dan Brown’s previous works? What makes The Lost Symbol unique? How has Robert Langdon’s perspective changed from Angels & Demons and The Da Vinci Code?