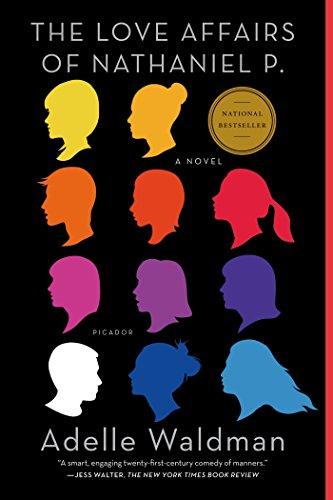 THE LOVE AFFAIRS OF NATHANIEL P.

Writer Nate Piven’s star is rising. After several lean and striving years, he has his pick of both magazine assignments and women: Juliet, the hotshot business reporter; Elisa, his gorgeous ex-girlfriend, now friend; and Hannah, “almost universally regarded as nice and smart, or smart and nice,” who holds her own in conversation with his friends. When one relationship grows more serious, Nate is forced to consider what it is he really wants.

In Nate’s 21st-century literary world, wit and conversation are not at all dead. Is romance? Novelist Adelle Waldman plunges into the psyche of a flawed, sometimes infuriating modern man—one who thinks of himself as beyond superficial judgment, yet constantly struggles with his own status anxiety, who is drawn to women, yet has a habit of letting them down in ways that may just make him an emblem of our times. With tough-minded intelligence and wry good humor The Love Affairs of Nathaniel P. is an absorbing tale of one young man’s search for happiness—and an inside look at how he really thinks about women, sex and love.

Adelle Waldman is a graduate of Brown University and Columbia University’s journalism school. She worked as a reporter at the New Haven Register and the Cleveland Plain Dealer, and wrote a column for the Wall Street Journal’s website. Her articles also have appeared in The New York Times Book Review, The New Republic, Slate, and The Wall Street Journal, among other national publications. She lives in Brooklyn, New York.

“Adelle Waldman’s debut novel, The Love Affairs of Nathaniel P., scrutinizes Nate and the subculture that he thrives in with a patient, anthropological detachment. Ms. Waldman has sorted and cross-categorized the inhabitants of Nate’s world with a witty, often breathtaking precision…”—Maria Russo, The New York Times

“[B]rilliant…a crisp, comic novel of manners and ideas… I inhaled this slim novel; now, I want to go back and read it again.”?—Maureen Corrigan, NPR

How does Nate see himself, and how does this differ from the way his girlfriends see him? What is your view of Nate? Does he come off as pretentious? As a womanizer? Are you able to sympathize with his thoughts or actions? If you had to summarize what his main character flaw is, what would you say?

“Dating is probably the most fraught human interaction there is. You’re sizing people up to see if they’re worth your time and attention, and they’re doing the same to you … We submit ourselves to these intimate inspections and simultaneously inflict them on others and try to keep our psyches intact.” Do you agree with this summary of the nature of dating? Is it as overwhelming as it is described, or is it really not “that big of a deal” as Nate believes?

The book delves into the psyche of a man, yet it is written by a woman. What effect does this have on the overall conversation and tone of the narrative? How would it be different if a man had written the book?

Do the male and female characters in the book seem to behave in ways that conform to or differ from our evolving conceptions of gender roles? Does the book present a world in which men and women are equal? If not, what inequalities seem to persist?

At one point, Nate wonders if he is a misogynist. He says that when he reads “something he admired…there was about an 80 percent chance a guy wrote it.” Do you think Nate is a misogynist? Later Hannah tells him that he “is treated like a big shot because he is a guy and has the arrogant sense of entitlement to ask for and expect to get everything he wanted.” Do you think the fact that Nate is male benefits him in terms of his career and the way he is seen in the world? He also silently criticizes Hannah for not working as hard at her writing as he does at his. Is that a fair criticism?

Aurit is the only major female character in the story who does not have a romantic history with Nate. Why is this, and what role does she play in the story and in Nate’s life?

Despite the fact that Nate initially found Hannah to be different from the other women he had dated, his attitude toward her eventually begins to change. Do you think there is a legitimate reason for this change? Or does it reflect a limitation of Nate’s? What do you think keeps the relationship going after the initial excitement has died down?

Why does Hannah agree to salvage her relationship with Nate multiple times after it begins to turn sour? She says she feels “ashamed of [her]self” for changing for Nate and for making allowances for his bad behavior because she cares for him. Do you think that there is a difference in the way men and women change throughout a relationship? Is it necessary to change for your partner, and if so to what extent?

Nate has relationships with many different kinds of women, and yet he can’t seem to be content with any of

them—Kristen the socially conscious do-gooder, Elisa the beautiful, and Hannah, who exhibits both cool and

intelligence. Nat wonders, “Why [do] women say men [are] threatened by women who challenge them?” Do you

believe that, in spite of his claim not to be, Nate may be threatened on some level? Is he truly finding himself

incompatible with these women, or are his breakups results of his own insecurities? All of them or only certain

Nate is largely influenced during his time in college by his male friends. How much of one’s mindset is

influenced by his peers during these formative years in his life? Do you think that Nate would have had a different outlook on women and relationships had he chosen to associate with a different group of friends? Consider the male characters in the novel. What role do they play in Nate’s life, and how do they still influence the way he thinks?

Discuss the idea of being seen through others’ eyes in the context of the book. Throughout this novel, we see

Nate’s views on others and also his thoughts on how people view him. Do you feel that it is a natural feeling to be

validated through others’ opinions? Do we need reassurance from our partners in order to accept ourselves?

What do you think Nate takes away from each relationship, if anything? At the end of the novel, is Nate in a

relationship that will last?