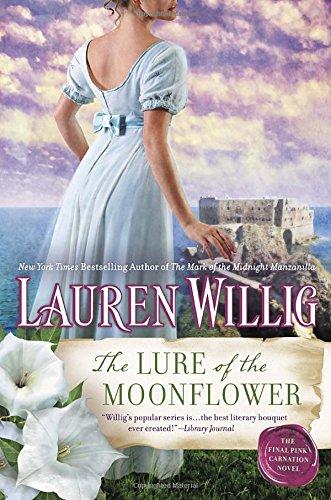 THE LURE OF THE MOONFLOWER

In the final Pink Carnation novel from the New York Times bestselling author of The Mark of the Midnight Manzanilla, Napoleon has occupied Lisbon, and Jane Wooliston, aka the Pink Carnation, teams up with a rogue agent to protect the escaped Queen of Portugal.

All of Portugal believes that the royal family departed for Brazil just before the French troops marched into Lisbon.

In the final Pink Carnation novel from the New York Times bestselling author of The Mark of the Midnight Manzanilla, Napoleon has occupied Lisbon, and Jane Wooliston, aka the Pink Carnation, teams up with a rogue agent to protect the escaped Queen of Portugal.

All of Portugal believes that the royal family departed for Brazil just before the French troops marched into Lisbon. Only the English government knows that mad seventy-three-year-old Queen Maria was spirited away by a group of loyalists determined to rally a resistance. But as the French garrison scours the countryside, it’s only a matter of time before she’s found and taken.

It’s up to Jane to find her first and ensure her safety. But she has no knowledge of Portugal or the language. Though she is loath to admit it, she needs the Moonflower. Operating alone has taught her to respect her own limitations. But she knows better than to show weakness around the Moonflower—an agent with a reputation for brilliance, a tendency toward insubordination, and a history of going rogue.

Lauren Willig is the New York Times bestselling and RITA Award winning author of the Pink Carnation novels. She has a graduate degree in English history from Harvard and a J.D. from Harvard Law School. She now writes full time, and lives in New York City.

“Willig’s series gets better with each addition.”—Booklist

Discuss the role that societal norms and class play in the book, and how the main characters are affected by their perceived status.

Jack and Jane are both very determined individuals who prefer being in control of a situation, rather than sharing the reins of power. Do you think that either of them had the upper hand at the beginning of the book? What moment (if there is one) brings about a shift in the power dynamic between them? How does this shift affect their relationship going forward? How do you think things might have been different if they shared the decision making from the start?

Talk about Jane’s resistance to conventions such as manners, marriage, and mores. How might her life have been different if she’d lived in a more modern era? Do you think she still would have become a spy? How would that have been different?

How do you think Jack’s childhood—his mother’s suicide, his strained relations with his father, his outside status as a half-caste—shaped his character and the way he views himself and the decisions he made?

Was it surprising to you that Colin’s great-aunt was a spy? Do you think it is fitting that the descendants of the Selwicks would still carry on spying in the modern world?

What name do you think Jack and Jane should finally settle upon for their pet donkey?

Did you know much about Portugal during the Napoleonic era before reading The Lure of the Moonflower? Did you learn anything new about this period in time? Do you prefer learning about history through fictional characters or through narrative nonfiction accounts?

If you were Jane, would you have chosen Jack or Nicolas? Discuss the merits and shortcomings of each of them.

Out of all the characters in the Pink Carnation books, which one would you choose to take out for a cup of tea? Who was your favorite couple? Discuss why.