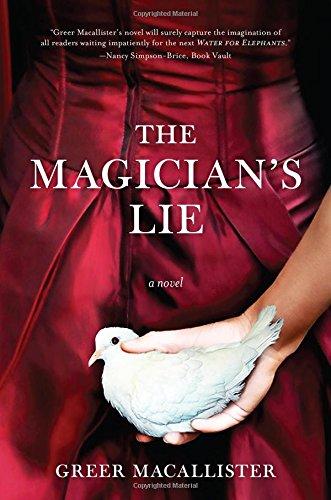 The Amazing Arden is the most notorious female illusionist of her day, renowned for sawing a man in half. One night, with policeman Virgil Holt in the audience, she swaps her saw for a fire ax. A new trick or an all-too-real murder? When a dead body is discovered, the answer seems clear. But under Holt's interrogation, what Arden’s story reveals is both unbelievable and spellbinding. Even handcuffed and alone, she is far from powerless. During one eerie night, Holt must decide whether to turn Arden in or set her free… and it will take all he has to see through the smoke and mirrors.

The Amazing Arden is the most notorious female illusionist of her day, renowned for sawing a man in half. One night, with policeman Virgil Holt in the audience, she swaps her saw for a fire ax. A new trick or an all-too-real murder? When a dead body is discovered, the answer seems clear. But under Holt's interrogation, what Arden’s story reveals is both unbelievable and spellbinding. Even handcuffed and alone, she is far from powerless. During one eerie night, Holt must decide whether to turn Arden in or set her free… and it will take all he has to see through the smoke and mirrors.

Greer Macallister was raised in the Midwest. She is a poet, short story writer, playwright and novelist whose work has appeared in publications such as The North American Review, The Missouri Review, and The Messenger. Her plays have been performed at American University, where she earned her MFA in Creative Writing. She currently lives with her family in Brooklyn.

“A little taste of The Night Circus, and little salt of Water for Elephants, The Magician’s Lie by Greer Macallister is a wonderful combination of magic, vaudeville and the drama of an secret life. Is her story real, or an illusion? Are her magic acts true, or a magician's lie?”—Annie Philbrick, Bank Square Books, Mystic CT

“Greer Macallister's novel will surely capture the imagination of all readers waiting impatiently for the next Water for Elephants. No spoilers here, but know that the conclusion of this book is gripping and exciting … intense character development, spot-on historical references, and page-turning action.”—Nancy Simpson-Brice, Book Vault (Oskaloosa, IA)

“A riveting read with suspenseful turns, The Magician’s Lie takes you on an engaging and atmospheric journey through storytelling and illusion. Greer draws on raw emotion and leaves you questioning just how much is left behind the curtain.” —Sarah Jio, New York Times bestselling author of Goodnight June and Blackberry Winter

The action of The Magician’s Lie alternates between a single night in 1905, with Arden imprisoned by Officer Holt, and the story of her life that Arden is telling him, which ranges over a number of years. Did you find one storyline more intriguing than the other? Were you eager to get back to one or the other?

As the novel opens, Virgil Holt has just received the bad news that the doctor won’t operate on the bullet lodged near his spine. How does this affect his actions? Do you think he would have behaved differently if he were uninjured?

“The law is perfect. The men in charge of executing it are not.” Officer Holt decides early on that if Arden is innocent, it’s his responsibility to free her instead of turning her in, since the courts can’t be trusted to determine guilt or innocence. Do you believe this? Do you think he should have turned her in either way?

Before her mother runs away with Victor Turner, Arden lives in splendor at her grandparents’ mansion in Philadelphia, but is raised mostly by tutors and household servants. Do you think she would have been better off if her mother hadn’t taken her along to Tennessee?

After Ray breaks Arden’s leg, preventing her from dancing for Madama Bonfanti and having the chance to enter ballet school, she says, “There were so many what-ifs.” What do you think would have happened if he hadn’t done this?

Misunderstandings and difficulties arise from Arden’s differences of opinion with other characters, but she also has a great deal in common with some of the same people. Who else in the book is most like her? Her mother? Ray? Clyde? Adelaide? Who is she least like?

When Arden confesses that Ray has hurt her, her mother tells her, “You must be mistaken… we all depend on that boy’s father, for our lives, for everything…. I think you know Ray won’t be the one he’ll punish. We will all suffer instead.” Do you feel Arden’s mother bears some responsibility for what happened to Arden at Ray’s hands? Should she have spoken up, even though it could have endangered their family’s well-being?

Fleeing Tennessee for Biltmore is a huge, pivotal moment in Arden’s life. Do you think it was the right choice? Should she have stayed with her family and tried to find another way to fight Ray?

In a key scene, the master of Biltmore tells Arden, “We all have agency,” and she later repeats it to Holt. What does this quote mean to you? Do you think it applies to your own life, and if so, how?

Arden is surprised that Holt easily believes in magic. Did this surprise you as well? Did you believe from the beginning that the disappearance of the bruise on Arden’s throat was magical, or did you suspect some sort of trick?

Ray pursues Arden for years, eventually finding her, first in Chicago and then again in Savannah. “My God, Ada, I’ve missed you so much. You’re my other half. The only one like me. I haven’t felt complete without you.” Why do you think he was so obsessed with her?

During their romance at Biltmore, Clyde is a slightly shadowy figure, and Arden learns that he’s not entirely trustworthy during their trip up the coast. Is Arden right to distrust him when they meet again years later? How hard is it to re-evaluate your relationship with someone you’ve known for a long time?

Arden is suspicious of rich people at several points in the book, and feels she can only fit in at Biltmore as a servant. Yet she was raised in wealth by her grandparents. Why do you feel she identifies so strongly with the life she led starting at age 12 instead of her life before that?

Adelaide Herrmann isn’t close to the people who work for her, except for Arden. Why does Adelaide choose Arden as her protégé?

Virgil is convinced that he was his wife’s second choice, after her childhood love Mose married another girl. Do you think this prevents him from being honest with her about his fears and hopes?

Arden’s near-death experience at the Iroquois Theatre, including her unhappy reunion with Ray, frightens her deeply. Yet she doesn’t share the full extent of her feelings, or the truth of what happened, with Clyde. Why do you think she keeps this from him? Does it contribute to their problems later in the story?

Arden’s illusions, such as the “Fair Shake,” comment on gender relations in a time when that would have been very controversial. How would the same illusions be received today? Do you think a woman cutting a man in half on stage would still be shocking to some audiences?

When Clyde asks her to marry him, Arden refuses, telling herself, “It was a trap… We were too strong-willed to be locked together in marriage, a permanent institution. If we tried to hold each other too close, it could destroy us.” Did you believe this reasoning? What other reasons would she have to accept or refuse his offer of marriage?

“I let him damage me and try to heal that damage, with his delusions of magic. I talk a good game about risk, but when it all came down to it, I chose something awful and safe.” When Ray threatens Clyde, Arden gives up, and allows him to hurt her and essentially keep her captive. Did you feel she had other options? If so, what should she have done instead?

Arden isn’t guilty of the murder of Ray, but she did cut his throat in Chicago, and she tells Holt she was “ready to kill him” before Clyde did so. In your mind, does this compromise her claims of innocence?

As the book ends, Holt has resolved to begin living his life anew, without letting his fear of death get in the way. Do you feel he has been profoundly changed by his experience with Arden? Or do you think these resolutions will fade in the harsh light of day? Where do you think Arden and Clyde’s story might go from the ending onward?

Whether or not Arden is telling Officer Holt the truth is a key question throughout the book. When did you most believe her? Were there times where you were sure she was lying?