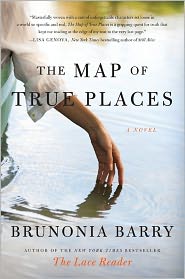 THE MAP OF TRUE PLACES

From Brunonia Barry, the New York Times bestselling author of The Lace Reader, comes an emotionally compelling novel about finding your true place in the world.

A respected Boston psychotherapist, Zee Finch has come a long way from a motherless childhood spent stealing boats. But the actions of a patient throw Zee into emotional chaos and take her back to places she thought she’d left behind.

What starts as a brief visit home to Salem begins a larger journey. Suddenly having to care for her ailing father after his longtime companion moves out,

From Brunonia Barry, the New York Times bestselling author of The Lace Reader, comes an emotionally compelling novel about finding your true place in the world.

A respected Boston psychotherapist, Zee Finch has come a long way from a motherless childhood spent stealing boats. But the actions of a patient throw Zee into emotional chaos and take her back to places she thought she’d left behind.

What starts as a brief visit home to Salem begins a larger journey. Suddenly having to care for her ailing father after his longtime companion moves out, Zee must come to terms with a strained and awkward relationship that has always been marked by half-truths and haunted by the untimely death of her mother. Overwhelmed by her new role, Zee must destroy the existing map of her life and chart a new course—one that will guide her not only into her future but into her past as well.

“Masterfully woven…The Map of True Places is a gripping quest for truth that kept me reading at the edge of my seat to the very last page.” —Lisa Genova, author of Still Alice

“Barry’s considerable latest delves into the long-lingering effects of a mother’s suicide. . . . This is a lovingly told story with many well-drawn characters, who sooner or later reconsider the courses charted by personal decisions and circumstance.” —Publishers Weekly

“The meditations on American history, assisted suicide, reincarnation and celestial navigation are informative and even endearing…the voice behind the plot turns is both likable and engaging.” —Carolyn See, The Washington Post

“A novice psychotherapist finds unsettling parallels between a patient’s suicide and her mother’s history in Barry’s second (The Lace Reader, 2008). . . . This woman-in-jeopardy thriller retooled with gothic elements–shifting identities, secrets and portents, a deserted cottage and a missing suicide note- manages to transcend.” —Kirkus Reviews starred review

At the beginning of the novel, Brunonia Barry includes a quote from Herman Melville—”It is not down in any map; true places never are.” Why do you think the author chose this quote to begin her story? Is the epigraph contradictory or complementary to the book’s title?

Three women play a nurturing role in Zee’s life—her mother, Maureen; her boss, Liz, and her mother’s friend, Ann. Describe Zee’s relationship to all three and explore what she learned from each.

At the beginning of The Map of True Places we are introduced to a psychological theory propounded by Zee’s boss. According to Liz, “a daughter will always live out the unfulfilled dreams of the mother,” especially if “those dreams were never expressed.” Does this theory hold validity for you? Was Zee living out the unfulfilled dreams of her dead mother, Maureen? What dreams? Explain.

Another of Mattei’s old adages was that everybody lies, to other people, but most importantly to themselves. What lies did the characters in the book tell themselves? How did they shape their relationships to one another?

Why did the death of Zee’s patient, Lilly, upset her so deeply? Could Lilly have been saved? What about Zee’s mother? Were Lilly and Maureen alike? Why did Zee blame herself for both tragedies? How can we learn to let go of regrets, to get beyond the “what ifs” in life? Did Zee eventually learn to do so?

When she was a girl, Zee had a strong sense of herself, yet as a grown woman, she is unsure of who she is and what she wants from life. How do we lose that sense of certainty we often have as children? How did Zee lose it? Can we retain it, or does the process of maturing overshadow our youthful notions? How do the events of the story transform Zee? Does she find clarity by the novel’s end?

The loss of self is also evident as Zee’s father, Finch, succumbs to Parkinson’s Disease and Alzheimer’s. What did caring for Finch offer the young woman? Did her father’s decline offer clarity or just confuse her more in her struggle to understand herself?

Talk about Zee’s relationship to her father, Finch, and his significant other Melville. Was she closer to one than the other? What impact did Finch have on Zee’s development? What about Melville?

Do you agree with Melville’s actions concerning the book of Yeats’s poetry at the novel’s end? What propelled him to do this? Did he ever have anything to be sorry for?

How did Maureen’s story The Once color Zee’s perceptions of love? What impact did it have on how she viewed Hawke? Who did Zee think Maureen was writing about? Maureen never finished The Once. How do you think it should end?

Celestial navigation is a theme interwoven throughout the book. What is the significance to the story? Did reading The Map of True Places make you interested in learning more about this lost art? Do you have a constant in your life that helps guide you to safety?

Home is another touchstone of The Map of True Places. What is home? What impact does “home” and the idea of home have on our lives and who we are? In Look Homeward Angel, Thomas Wolfe wrote, “you can’t go home again.” Do you agree with this?

The author skillfully interweaves literature and history into The Map of True Places. Choose any of these elements—such as Zee’s full name, Hephzibah, Nathaniel Hawthorne, Herman Melville, the Friendship—and talk about its significance to the story and the characters.

What did you take away from reading The Map of True Places? If you read Brunonia Barry’s first novel, The Lace Reader, how do the works compare and relate to each other?