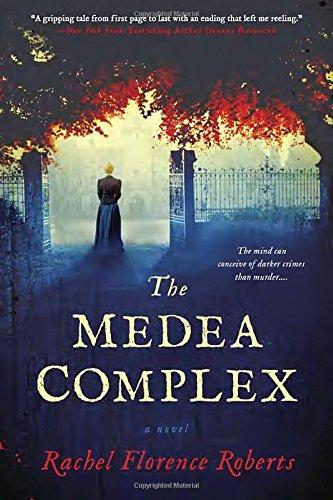 A deep and riveting psychological thriller inspired by true events of the Victorian era, The Medea Complex explores the nature of the human psyche: what possesses us, what drives us, and how love, passion, and hope for the future can drive us to insanity.

1885. Anne Stanbury wakes up in a strange bed, having been kidnapped from her home. As the panic settles in, she realizes she has been committed to a lunatic asylum, deemed insane and therefore unfit to stand trial for an unspeakable crime. But all is not as it seems….

A deep and riveting psychological thriller inspired by true events of the Victorian era, The Medea Complex explores the nature of the human psyche: what possesses us, what drives us, and how love, passion, and hope for the future can drive us to insanity.

1885. Anne Stanbury wakes up in a strange bed, having been kidnapped from her home. As the panic settles in, she realizes she has been committed to a lunatic asylum, deemed insane and therefore unfit to stand trial for an unspeakable crime. But all is not as it seems….

Edgar Stanbury, her husband as well as a grieving father, is torn between helping his confined wife recover her sanity and seeking revenge for his ruined life. But Anne’s future rests wholly in the hands of Dr. George Savage, chief medical officer of Bethlem Royal Hospital.

The Medea Complex is the darkly compelling story of a lunatic, a lie, and a shocking revelation that elucidates the difference between madness and evil….

Rachel Florence Roberts was born in Liverpool. She was inspired to write The Medea Complex after suffering with postnatal depression, following the birth of her son. The Medea Complex is inspired by true events that occurred towards the end of the 19th century, and is Rachel’s first novel.

“A harrowing trip through the dark corridors of a Victorian asylum and the unexpected twists of relationships that are as complex as they are compelling. Nuanced and mesmerizing.”—Deanna Raybourn, New York Times Bestselling Author of The Dark Enquiry

“A riveting debut novel filled with psychological suspense and dark, unexpected twists. In its chilling and compelling narrative, it manages to be both pull-no-punches historical fiction and a story so modern it could have happened yesterday.”—Simone St. James, Author of The Other Side of Midnight

At the beginning of The Medea Complex, Dr. Savage states that: “Men will forgive what women will not.” This is a very sweeping statement—however, it is evident throughout the novel that Dr. Savage holds some strong opinions about women in general. Yet, when Edgar is charged with murder toward the end, Dr. Savage is very quick to assume he is guilty. Was Dr. Savage so blinded by his own preconceptions and biases? Was he negligent in his care of Anne? Or was he simply a man with good intentions who was, unfortunately, a product of his time? Do you think his opinions and theories ultimately contributed to the tragic ending?

What did you think of the servants’ attitudes? Why were they so disrespectful toward Edgar? Do you think they truly did hate and resent him, or were their actions misinterpreted by his current state of mind?

What role, specifically, do you think young Betty had to play in the novel as a character? What did she bring to the novel?

Much of the story is based upon lies, deception, and miscommunication. What do you think may have happened if both Edgar and Anne had simply been open and truthful to each other from the beginning?

Does Anne have a conscience? How is she able to reconcile the idea that being responsible for others’ deaths is not only acceptable, but justifiable? Do you think, at any point, she feels guilty for what she has done? Why do you think the author decided to allow Anne to go unpunished for her deception?

At the end of the novel, Beatrix says that while she is no longer unable to judge Anne, she will continue to stand by her forever. Why does she feel this way? Is it because she herself is complicit in the entire plot, or is it because of the loyalty she feels because of her history with Anne’s mother? Is there a point, in someone’s behavior, that we could, or should, simply stop loving them? Is Beatrix right or wrong in remaining silent toward the end of the novel?

Is Anne a murderer? After all, she never actually spills any blood with her own hands. If she was ever found out, do you think she could, or should, be charged with murder? If so, of whom? Is withholding the truth that could set someone free a moral offense?

Do you think that sacrificing another child—one who is almost certain to die at the hands of a baby farmer—for your own means, is ever justifiable? What else could Anne have done, rather than go to such extreme measures?

Why was the justice system so lacking on behalf of Edgar Stanbury? Do you feel he was offered a fair trial? Was there enough evidence to ultimately send him to the gallows? Would the outcome have been different if he had been born into a different social class or had a more competent lawyer? Was it ultimately a failure of the court of law that sent Edgar to his death?

Edgar’s last thoughts are “You bitch” and “I love you both.” What does this ultimately suggest about his character? Do you think, at the end, he truly understands the level of Anne’s deception, or does he remain ignorant of her actions? Is it possible to continue to love someone, no matter how badly they treat you? If he had gone to his death with anger and resentment in his heart, would that have added or detracted from the emotional turmoil within the novel?

Anne fakes puerperal mania (modern-day postnatal psychosis) for her own means. Would you feel differently about her character if she genuinely suffered from the condition and had, in fact, killed her own child? If so, how and why?

The woman on the road claimed that she put her baby out to “nurse,” and had no idea that the baby farmer harbored untoward intentions toward her child. Do you truly believe she was not aware of the danger she placed her child in? As Anne herself mentions at the end of the novel, the newspapers at the time were full of such reports of horror. And if the woman had put her child out with the sole intention of never seeing him again, what impact would this have upon your opinion of this character, and the fact that Beatrix left her on the road to die?

Considering the subject matter of the novel, does it surprise you to learn that the author was inspired to write this book while suffering from postnatal depression? Does it change your understanding of the story to realize that many of Anne’s thoughts came from the author’s state of mind at the time of writing? Did this bias the novel’s outcome in any way? Were you also surprised to learn that much of the novel’s content is based upon true people and real historical events?

Was the ending of the novel expected? Was it satisfactory? Did you feel as if you were quite firmly on only one character’s side, or did you feel you understood them both? Or neither? Do you feel pity for Edgar’s side of the story, or Anne’s? Was there a passive character and an active character? Why do you think this is? Do you think that both their individual personalities were shaped by their upbringing and fathers’ influences?